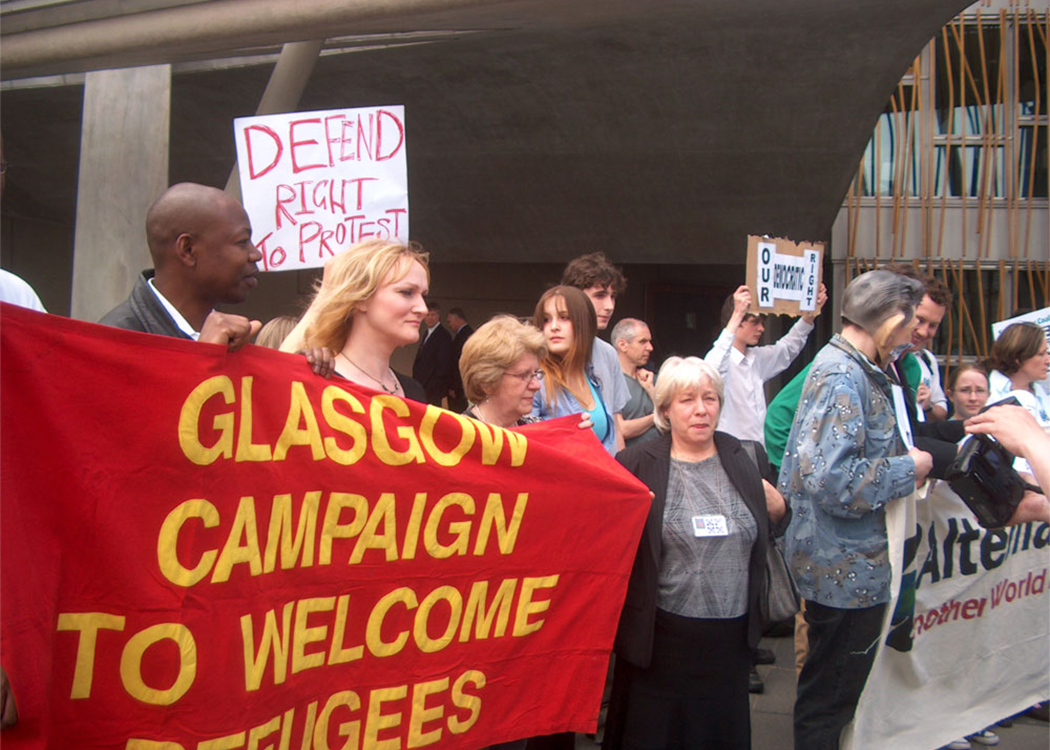 SANDRA WHITE, the SNP MSP for Glasgow Kelvin, has called for Europe to “open the borders” to allow in refugees fleeing war and other humanitarian catastrophe in the Middle East and Africa.

White made the comments to a packed rally in the lecture hall of the Sir Charles Wilson building on Glasgow University campus.

The rally was organised by a range of organisations including Glasgow Campaign to Welcome Refugees, Afghan Centre for Human Rights and Democracy, Association of Palestinian Communities in Scotland and the Scottish Trades Union Congress, and was held in place of a conference by the academic Glasgow Refugee Asylum and Migration Network, who offered the venue for the rally due to the severity of the refugee crisis.

During her speech to the hall, the campaigner said that not only Syrians and those displaced recently, but also those who have survived for decades as refugees should be taken by western nations, including Scotland: “I say open the boarders. This will be controversial, but I say there are thousands of Palestinian refugees in these camps in Jordan and Syria and elsewhere, they should be brought over here as well.”

Scottish Green councillor Martha Wardrop told the audience that the need to take refugee would only increase: “This is the new norm. There will be many more refugees coming in over the winter months,” she said.

The rally also received campaigners returning from the isle of Lesbos in Greece, where many refugees land having made the perilous journey across the Mediterranean Sea.

Pinar Aksu, who had just returned from the Greek Island, told the audience of several hundred of her experiences of receiving a boatload of refugees on the shore: “I took a baby off of a woman who climbed out of a boat. The baby was so frozen and not moving. She had fainted from the cold.

Her voice broke as she told the audience: “I thought the baby might be dead. That was a moment in my life I will never forget. Thankfully the baby revived.”

Hundreds of thousands of refugees have entered Europe, mainly from the Middle East and Africa, since the begining of 2015. Europes governments have adopted very different approaches to the crisis, with Germany agreeing to recieve 500,000 refugees per years and other countries like the UK agreeing to to just 20,000 over five years.

The UK has sold arms to the Syrian regime and the Saudi Arabian government which is now bombing Syria. Last week the US Government admitted for the first time that Daesh (Islamic State) now has weapons sent by the west intended to arm Syrian rebels.

Organisers told the audience they would be holding more demonstrations in the recent future, including a solidarity convoy driving from Scotland to Calais.