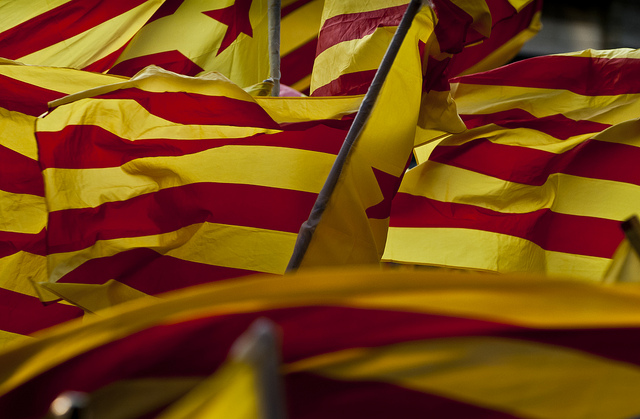 The open letter from SNP MSPs demands a “free, fair and non-intrusive referendum in Catalonia”

26 SNP MSPs have signed an open letter, drafted by SNP MSP for Hamilton, Larkhall and Stonehouse Christina McKelvie, calling for the European Commission to “adopt a formal, interventionist position” on repressive measures by the Spanish Government and to ensure a “free, fair and non-intrusive” vote on the independence of Catalonia take place.

The letter, made public on social media the day before First Minister Nicola Sturgeon, in responding to a question from SNP MSP Ivan McKee at First Minister’s Questions, called for dialogue between the Catalan and Spanish Governments.

After McKee spoke of “shocking scenes in Catalonia”, referring to the actions by the Guardia Civil and the Spanish Government in attempting to prevent the planned 1 October referendum, Sturgeon said that the right to self-determination is “crucial”.

Sturgeon also highlighted the Edinburgh Agreement which laid the groundwork for Scotland’s 2014 referendum as a “shining example” of the results open dialogue could produce.

“We believe the actions inflicted upon the Catalan people directly contravenes The International Covenant on Civil and Political Rights.” Open letter to President Juncker from 26 SNP MSPs

McKelvie’s letter, addressed to European Commission President Jean-Claude Juncker, went further in its demands. It writes: “The principle of self-determination appears to have been undermined through the actions of the Spanish Government.

“We believe the actions inflicted upon the Catalan people directly contravenes The International Covenant on Civil and Political Rights (1966), namely: the freedom of expression (Article 19); the right of peaceful assembly (Article 21); the right of freedom of association with others (Article 22); the right and opportunity to take part in the conduct of public affairs, directly or through freely chosen representatives (Article 25); the right to vote and be elected at genuine periodic elections which shall be by universal and equal suffrage and shall be held by secret ballot, guaranteeing the free expression of the will of the electors (Article 25).”

The letter’s reference to the quoted articles of the International Covenant on Civil and Political Rights (ICCP) follows accusations by a spokesperson of Spain’s Ministry of Foreign Affairs that Cabinet Secretary for External Affairs Fiona Hyslop – who last week defended Catalonia’s right to hold a referendum – had misinterpreted “self-determination” as it is defined in the UN Charter.

The spokesperson argued that such a right is “limited to the context of decolonization.”

The letter to Juncker calls on the European Commission to “condemn the ongoing repressive measures of the Spanish Government”, to adopt a “formal, interventionist position” to act as a mediator and ensure that a “free, fair and non-intrusive referendum” take place, and that “the principles of self-determination are upheld and that the human rights and civil liberties for people of Catalonia are adhered.”

Since the publication of the letter last night, with 24 initial signatories, two more, SNP MSPs James Dornan and Christine Grahame, have also added their names.

“The SNP reiterates the call for the Spanish Government to engage in dialogue with the Catalan Government, rather than seizing ballot boxes.” Christina McKelvie MSP

Asked to confirm that the letter does not, as yet, represent the official position of the SNP, Christina McKelvie told CommonSpace: “The situation ongoing in Catalonia is clearly, as shown by the letter, of deep concern and the SNP reiterates the call for the Spanish Government to engage in dialogue with the Catalan Government, rather than seizing ballot boxes.

“The letter, supported by the undersigned, remains clear that human rights, civil liberties and, crucially, the right to self-determination is a fundamental principle to democracy which should be respected and honoured.

“The SNP remain committed to the protection of civil liberties and human rights, which encompasses the right of self-determination, which applies to the people of Catalonia as elsewhere.”

Given the relative silence on the issue of Catalonia from all other parties beside the Scottish Greens, McKelvie said: “I am proud that the SNP have took the lead in restating our long held belief that the right to self-determination is resolute.

“As enshrined within Article One of the UN Charter, all people have the fundamental right, through assembly, protest and suffrage in a free and fair election, to determine an outcome for their country.

“The people of Scotland, in solidarity and empathy in the face of repression, always respond.” Christina McKelvie MSP

“The 2014 Independence Referendum and the preceding Edinburgh Agreement showed that countries, with polar opposite political and social values, are capable of peacefully debating the future constitutional relationship between them. I would hope the same values of tolerance, acceptance, peaceful debate and dialogue can be shown by the Spanish Government in reference to Catalonia.”

Referring to further plans for actions of solidarity with Catalonia, McKelvie commented: “It should come as no surprise that Scotland has responded in support for the Catalan people. The people of Scotland, in solidarity and empathy in the face of repression, always respond.

“I’ve been made aware of a number of Catalan solidarity demonstrations throughout the upcoming weeks and I will try to attend as many as I can. As a delegate to the Council of Europe, scheduled to attend their next plenary, I will be bringing this issue direct to the Council, stating Scotland’s support for the right to self-determination and democracy.”

Emergency pro-democracy rallies in support of Catalonia have been organised by the Radical Independence Campaign: today (21 September) at 5-7pm in Glasgow on Buchanan Street steps, and on 25 September at 5-7pm in Edinburgh outside the Spanish consulate.

A national demonstration in support of Catalonia will take place in Edinburgh on 1 October, the day the Catalan referendum is planned, at 1pm, also at the Spanish consulate.