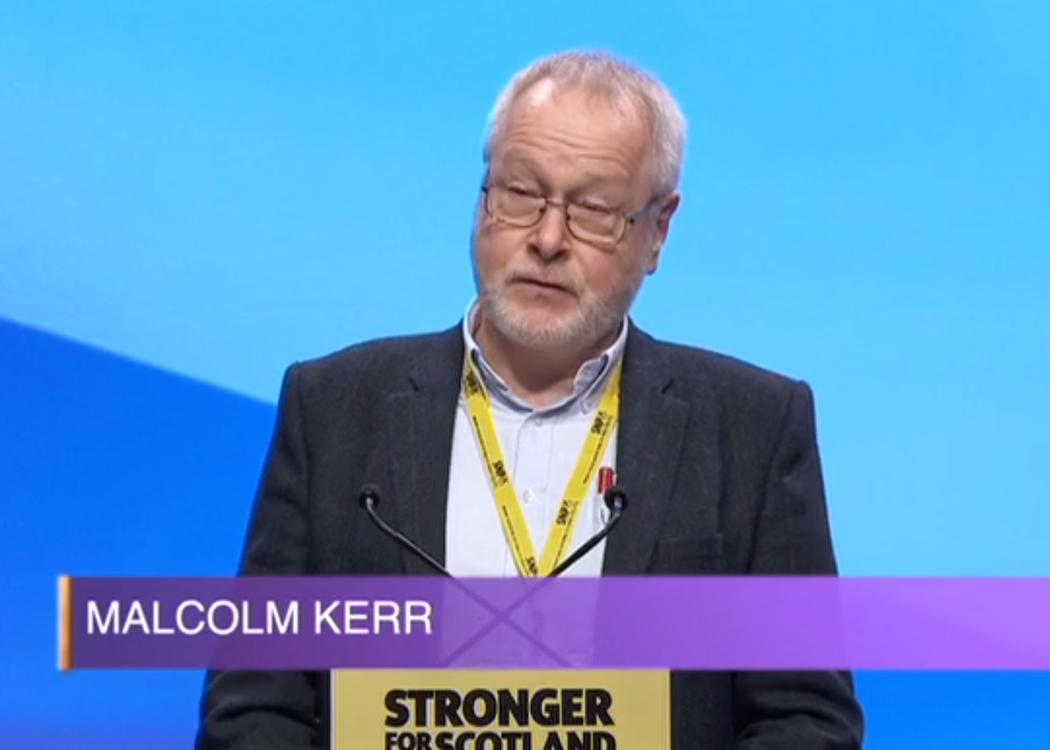 GATHERINGS of Scotland’s governing party should open up to more diverse debates led by its membership, according to SNP campaigners at the party’s Spring conference.

Described as an “election conference”, the 3,000 person strong Glasgow rally began with criticism that the tone of the event was “self-congratulatory”, “complacent” and similar to the New Labour project under Tony Blair.

Other party members are calling for greater transparency and internal party democracy when it comes to decisions taken by SOAC [Standing Orders and Agenda Committee], a membership elected board which accepts or rejects potential motions.

The demand for greater influence for the party’s 115,000 members follows disquiet over the dilution and then rejection of anti-fracking motions at SNP conferences and a rebellion of members last October on the issue of land reform.

Since the expansion of the party’s membership, SNP campaigners have called for stronger government policies on land reform , fracking , TTIP , justice reform , and rent controls .

Malcolm Kerr, convener of SNP Isle of Arran branch, began the conference with a warning over its agenda: “There are 17 policy motions on the agenda. Three quarters of these were submitted by elected members of the Scottish and UK parliaments with only four from the SNP’s 200 branches.

“With some exceptions the overall tone of the motions is one of complacent, self-congratulation. Look for phrases like ‘welcomes’, ‘agrees’, ‘commends’, ‘congratulates’, ‘supports’, ‘praises’.

“Most of the motions break SOAC’s own guidelines by restating existing party policy. Nearly half the motions are so self-congratulatory that they even omit to state any proposal or action.

“Scotland is looking to our movement for inspiration and leadership, not just competent management. We have a duty to showcase the diversity of views within the SNP, which is a strength, not a weakness.”

Motions on the council tax and Trident were heard at the conference, with only very limited dissent to the SNP’s new council tax proposals.

“To get real democracy in the standing orders and the agenda committee is the most important thing you could do to reform party democracy.” Nicky MacCrimmon

At the conference SNP loyalists pointed out that conference agendas are tightly pressed for time, that dissent at conferences demonstrates there is no censorship of discussions, and that the fracking issue was discussed at the 2015 conference.

However, Kerr’s remarks provoked a response from SNP national secretary Patrick Grady MP who promised greater support for branches in writing competent motions and explaining the process to the wider membership.

Finishing his call to “note” rather than “approve”, the SOAC report to applause from a sizeable section of the gathered membership, Kerr said: “Delegates, I’ve attended SNP conference since the 1970s. It pains me to say this, but this conference is beginning to resemble the Labour party in the Tony Blair era. We can do better than that.”

Despite proposals for a debate on the imminent closure of Longannet power station, the conference instead held a ‘topical resolution’ in favour of voting SNP.

There were successful motions on the Tie campaign and rent controls at the conference, as well as a promise to “monitor” Finland’s basic income. However, the vast majority of 19 motions restated current SNP policy or criticised the Tory government.

Since the expansion of the party’s membership, SNP campaigners have called for stronger government policies on land reform, fracking, TTIP, justice reform, and rent controls.

Both reformers and party loyalists agree that a significant problem for the selection of SOAC motions is a high volume of poorly drafted resolutions that don’t meet party rules.

Nicky MacCrimmon, who led the victory for land reform campaigners at the party’s 2015 conference, was similarly in favour of greater democratic input into the selection process.

“To get real democracy in the standing orders and the agenda committee is the most important thing you could do to reform party democracy. Then you would have an accountable organisation about who is making decisions on what comes to conference. We need to be a lot more open and transparent about why some of those decisions are made,” MacCrimmon told CommonSpace.

MacCrimmon was sympathetic that MSP candidates were prioritised in the agenda ahead of May’s parliamentary election, but said more effort had to be made to involve the membership: “When you look at the number of motions that came from parliamentarians at the October conference, it’s hugely weighted towards them. We need to get more local democracy. We need to get more local branches having motions actually taken to conference.

“You need some form of education with information to guide local branches how to do it. I’ve been in the party for six years. Nobody’s ever told me how you would take a motion to national council or to SOAC. I’ve had to go and do that digging myself.

“You’ve got National Council (NC) where you can put motions. But they’re in blooming secret in terms of when they actually take place.”

“There needs to be a lot more transparency about how you get things onto the agenda, how decisions are made, and actually encourage and up skill branches in being able to do it.”

The next NC meeting is 21 May, but MacCrimmon’s branch does not have a meeting until after the deadline for NC motions – meaning that they will not be able to contribute in time before NEC discussions.

“It’s not some sort of massive conspiracy. It’s that the party’s underlying structures are straining to cope with the growth in the party.” Chris Hanlon

The NC is the governing body of the SNP between conferences. It is comprised of SNP officer bearers (all elected politicians), six elected members, and representative of interests groups like SNP Trade Unionists, SNP Youth and SNP Students.

Both reformers and party loyalists agree that a significant problem for the selection of SOAC motions is a high volume of poorly drafted resolutions that don’t meet party rules.

Another pressure comes from the tens of thousands of new members less familiar with party structures who want to continue their excitement from the independence referendum.

Chris Hanlon, one such activist, provided one of the rare off-script moments at the weekend conference when he nervously criticised SOAC and opportunities to debate new policies.

“We really need to treat conference like work. We’re coming here to do a job of work. We need to stop wasting time on things we already know,” Hanlon told CommonSpace.

“I’d like to see more of the grassroots actually in the agenda and more transparency on forming the agenda, so that the people who don’t get on the agenda don’t feel like they’ve been snubbed – that they understand why they haven’t got on.

“It’s not some sort of massive conspiracy. It’s that the party’s underlying structures are straining to cope with the growth in the party.”

A SNP spokesperson told CommonSpace: “The members of SOAC are all elected democratically by SNP conference on an annual basis, and they undertake the remit of producing the conference agenda. There is not enough room to discuss everything that is submitted, so some people will always be disappointed.”