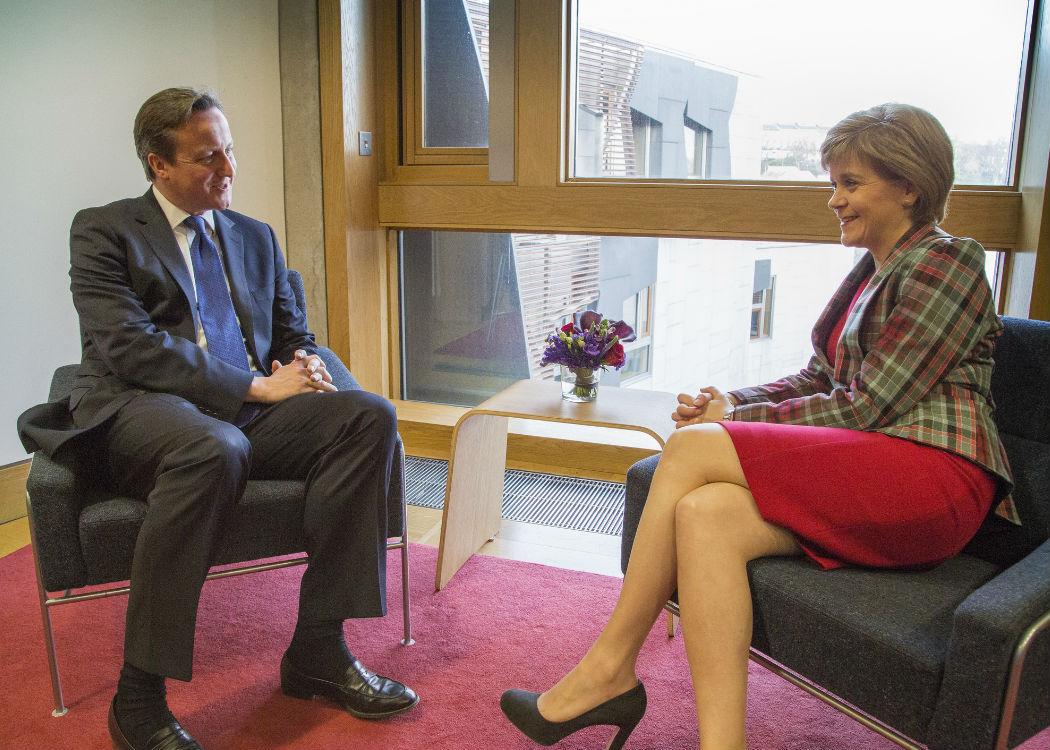 THE Scottish National Party (SNP) have denied suggestions that they could help David Cameron stay in Downing Street as Prime Minister.

In a new discussion paper, Professor Richard Rose, of Strathclyde University, predicts that the Conservatives are set to become the largest party after the May poll, as well as estimating major gains for the SNP.

The paper argues that, as leader of the biggest party but well short of a Commons majority, Cameron would call a vote of confidence in a new Conservative Government within 10 days of the election for which it would be “logical” for the SNP to abstain on, providing it won concessions on further devolution.

However, an SNP spokesperson said: “Tories have been rejected in election after election in Scotland, and the SNP would never help them into power.

“By electing SNP MPs, the people of Scotland can vote to get rid of the Tories, and have a powerful voice to protect and promote Scottish interests.”

The report, commissioned by asset manager Toscafund, predicts the SNP will win 45 of Scotland’s 59 seats, up from six, as Labour’s tally plummets from 41 to 10.

Combined with a strong vote for UKIP and the Greens down south, and the collapse of the Libs Dems, Rose suggests that the final result will leave the Conservatives with 292 seats and Labour on 273.

Electoral law states that if a party loses a confidence vote then a second election would be triggered in June, unless Labour managed to form a government within 14 days.

In his report, Professor Rose argues that Cameron would win a confidence vote ‘by default’ as Labour would be unable to form a government with the other parties – specifically the SNP or the Lib Dems.

He said: “A Labour attempt to lead some sort of coalition government would face sceptical potential partners.

“After suffering a major defeat, the Liberal Democrats would not have a leader who could represent the party in negotiations with Labour and MPs who had survived the party’s electoral debacle would likely be shy of another coalition.

“A triumphant SNP could well have sufficient seats to put Labour in office, but to do so after resoundingly trouncing Labour in Scotland would be a volte face.

“Equally important, it would undermine the SNP’s campaign to remain the Scottish government in competition with Labour at the May, 2016 Scottish Parliament election.”

When asked whether the SNP might abstain on a vote of confidence on a Conservative minority government, pollster Professor John Curtice, also of Strathclyde University, told CommonSpace that he could “see the circumstances in which that possibility might arrive”

“It is certainly true that the Tories are the incumbent party so they don’t have to resign.” Curtice told CommonSpace, “so Cameron could sit there and dare the other parties to vote him down. It’s a game of chicken.”

Curtice, however, maintained that ultimately the election remained too close to call.

The left-wing think tank the Common Weal have this week launched ‘The Red Lines Campaign‘ which state the five issues that the SNP or Greens should win concessions on if they are to prop up a Labour government. These are; to start investing instead of cutting, the introduction of a living wage, the scrapping of Trident, greater devolution across the UK, and the replacement of the House of Lords.

Picture courtesy of office of First Minister of Scotland