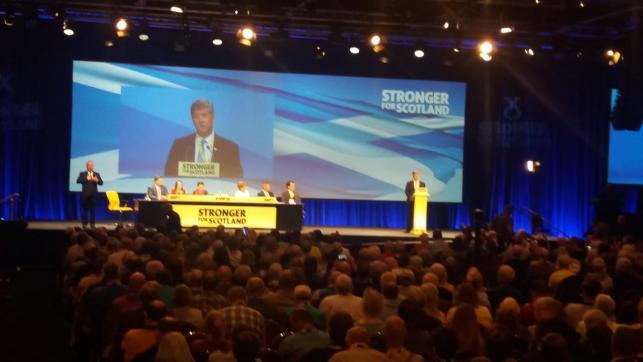 The national assemblies will be addressed by Growth Commission chair and corporate lobbyist Andrew Wilson, and will then be split into smaller groups for discussions

THE SNP has revealed further details of the three National Assemblies announced at its party conference last month for members to debate and discuss the recommendations of the SNP Growth Commission report released earlier this year.

Taking place on 25 August in Ayr, 1 September in Aviemore and 9 September in Edinburgh, the National Assemblies are intended to be forums for the development of policy within the SNP, with new policy recommendations being presented to the party for approval at either their next conference or national council.

The assemblies will focus entirely upon the Growth Commission, which featured numerous proposals that have caused controversy and disagreement within the independence movement, most notably its advocacy of sterlingisation and support for what it calls “fiscal consolidation” but has been characterised by the Common Weal and the Institute for Fiscal Studies as austerity.

Keith Brown was elected as SNP deputy leader at the party conference in June, and announced that, in addition to party members, they will be inviting trade unions, business groups, civic Scotland and other figures and organisations from within the independence movement to participate in a discussion about the Growth Commission. As the STUC pointed out in their subsequent criticism of its report, there was no trade union involvement in the formulation of the Growth Commission itself.

Brown said at the conference after being announced as leader: “I’m looking forward to chairing those discussions of what promises to be an exciting and invigorating debate, and it will be a debate.

“That debate is not just for us – of course. The national assemblies are about the SNP – but we also have a responsibility to set out a credible plan for independence, and to listen to others, and to take on their ideas.

“So I’ll also engage in a wider discussion, inviting trade unions and business groups, as well as people from across civic Scotland, and of course the wider Yes family to share their views with us.”

CommonSpace sought details from the SNP on how they would be engaging the wider independence movement, but received no response.

At these day-long events, Andrew Wilson, the chair of the Growth Commission report and head of corporate lobbying firm Charlotte Street Partners, will present the commission’s findings before attendants break up into smaller groups to consider the various issues involved.

Given that Wilson’s presentation appears to be receiving primary focus, it is not yet clear whether alternative agendas may be put forward by members.

Speaking to CommonSpace editor Ben Wray at the SNP’s June conference in Aberdeen, Brown said: “We’ve not had National Assemblies for quite some time in the SNP, and the defining aspect of the role of deputy leader is to engage, facilitate and lead policy engagement with the wider membership.

“I think it’s really important that people do have their chance, so I had said very early on the campaign that if elected, I would call a National Assembly, before these were announced. And subsequently, when the Growth Commission itself was published, I said that should be the perfect subject for a National Assembly.

“For those that have been involved in National Assemblies in the past, they will know they are open, they’re wide-ranging, they’re relatively unrestricted – so I think that’s a perfect forum for having that general discussion within the SNP.”

Brown emphasised that National Assemblies have never been decision-making bodies within the SNP, and anything which arises from discussions during the assemblies which members wish to vote on would have to be put into the form of a motion at the annual party conference in Ocotber.

However, the email to members about the Assemblies suggested that policy proposals would have to wait until spring conference next year.

The email read: “Discussions at these events are intended to kick-start our policy development process. The conclusions will form the basis of policy resolutions to be presented to National Council in December or our Spring Conference in 2019.”