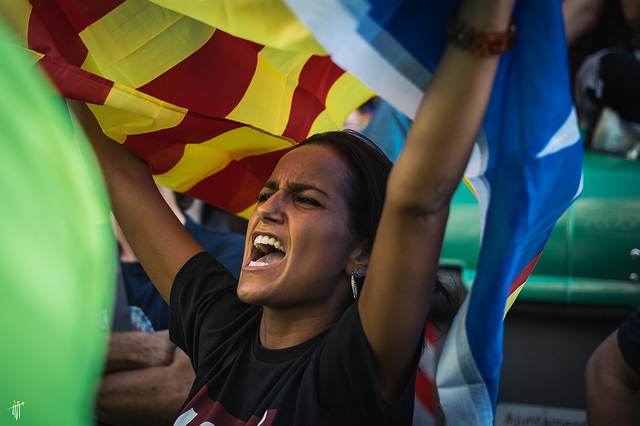 THE SNP has further entrenched its support for the people of Catalonia in the aftermath of the embattled Catalan independence referendum with a topical resolution calling for international mediators to find an “agreed solution” to Catalonia’s standoff with the Spanish Government.

After an onstage tribute was paid to the Catalan delegation to the United Kingdom and Ireland, represented at the conference by Sergi Marcén and Jennifer Velasco, much of the audience erupted in a standing ovation, unfurling Catalan flags and delivering perhaps the most sustained bout of cheers and applause of the SNP’s Autumn conference thus far.

Following this, SNP MP and member of the All Party Parliamentary Group on Catalonia Douglas Chapman joked that the conference’s enthusiasm for Catalonia had left him with a mere 30 seconds left to speak.

Chapman continued: “Irrespective of how your country moves forward, you’ll always have friends in Scotland.”

Tributes were also paid to those SNP politicians and representatives of Young Scots for Independence (YSI) who travelled to Catalonia as observers during the 1 October referendum.

“The true dignity however, lies with the people of Catalonia,” continued Chapman. “Their actions were exemplified in the face of violence and provocation and intimidation. They went ahead and were determined to make their mark.

“While the Spanish authorities, as you all know, put a great deal of effort into making that vote as difficult as ever, the Catalans responded in a way I’d never seen before: by making paella. They sang and danced and smiled.

“Ladies and gentlemen, they used the most valuable weapon we have: they used a ballot paper and a pen, and that was more important than anything the Spanish authorities could throw at them.

“Never again should we see an EU state turn with violence against their own people.”

“What I saw was repression on a scale I never expected to see in a Western, European democracy.” SNP MP Joanna Cherry

Joanna Cherry, who along with Chapman and a number of others was in Barcelona for the referendum as part of a 35-nation cross-party delegation, also spoke in favour of the resolution, saying: “What I witnessed was a quiet and dignified determination to vote in the face of considerable interference.

“What I saw was repression on a scale I never expected to see in a Western, European democracy.

“The Spanish Government have a postion about the legality of this referendum which you’re all aware of. As a matter of international law, the disproportionate use of force is not lawful, and what happened on the streets of Catalonia was not lawful.”

“You can’t in a democracy simply say to people: it’s illegal for you to decide what you want your future to be.” First Minister Nicola Sturgeon

Earlier on Monday, First Minister Nicola Sturgeon said: “I didn’t ever really take kindly to people trying to interfere in whether Scotland should become independent; it’s not for me to say whether Catalonia should be independent.

“But there are two things I would say: firstly, the scenes we saw last Sunday of violence against people just trying to vote were absolutely unacceptable, and everybody, regardless of their views on independence, I think should condemn that.

“But secondly, the people of Catalonia should be able to decide their own future. So if that referendum was illegal, which is Spain’s position and I respect that, the question is: could people legally and legitimately express their view?

“Because you can’t in a democracy simply say to people: it’s illegal for you to decide what you want your future to be.”

Sturgeon reiterated her call for dialogue between the Catalan and Spanish Governments in resolving the situation.

Earlier on Monday, the French Government stated it would not recognise Catalonia should it go ahead with a unilateral declaration of independence, arguing that such an act would result in expulsion from the European Union. Nathalie Loiseau, France’s European affairs minister, argued: “If there were to be a declaration of independence, it would be unilateral, and it would not be recognised.”

The Catalan referendum result, which yielded a 90 per cent victory in favour independence, will be brought before the Catalan parliament by Catalan president Carles Puigdemont on Tuesday evening.

“We will apply what the law says.” Catalan President Carles Pugdemont

Puigdemont may push for a unilateral declaration of independence in defiance of Madrid. However, moderate elements within Puigdemont’s party, Catalan PDeCAT, are reportedly urging the president to back down from such an action. Catalan MP Marta Pascal told the BBC on Sunday that there will instead be a “symbolic statement”.

However, due to reforms pushed through the Catalan parliament shortly before the plebiscite, Puigdemont has argued that he is required to make a declaration of independence, regardless of the views of the Spanish Government or constitutional court.