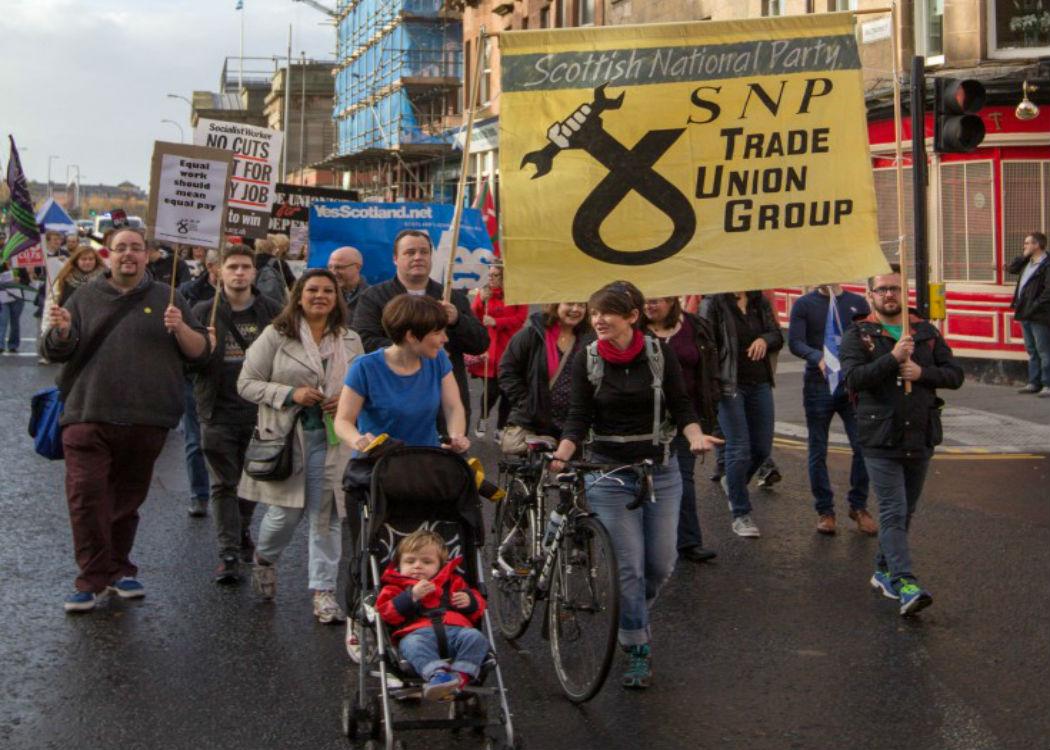 CommonSpace spoke to Kirsteen Fraser, secretary of the SNP Trade Union Group, about the huge rise in membership it has had over the past year, and its upcoming conference

THE SNP trade union group is set for its first conference on 20 June in Stirling after increasing its membership by some 20 times since the referendum, and the party is seeking to change the trade union political model in Scotland with its new found strength, rather than replace Labour as the dominant party of the unions.

Kirsteen Fraser, a Unison shop steward from Glasgow, is secretary of the SNP trade union group and is co-ordinating the conference. She told CommonSpace that the party’s newly found strength in the trade unions would be used to move away from a political model – based on backing the Labour party – that has “alienated” workers from the trade union movement in Scotland.

She said: “We’ve always opposed the political levy in the trade unions going to the Labour party, but what the trade union movement has to wake up to now is that we are entering an era of multi-party politics. I think some of the trade union leaders are getting this – Len McCluskey [Unite leader] said after the General Election that most of his members in Scotland voted SNP.

“The model of just backing one party has really alienated a lot of workers from the trade union movement at election time, and it has to change.”

The party’s trade union membership has risen sharply from 800 before the referendum last September to 16000 now, more than the total number of members in Scottish Labour, with members in every union in Scotland. Asked if the SNP would not like to use that strength takeover from Labour as the party funded and backed by the trade unions, Fraser said that was not what they wanted.

CommonSpace reported in April that the Scottish section of Unite are seeking to gain political autonomy in Scotland to make its own decisions about political representation at the UK-wide rules conference in July (click here to read more). Unite is Labour’s biggest donor and the largest trade union in the UK, and Fraser believes that move to be a “litmus test” for the wider trade union movement.

“I think Unite are leading a lot of this and it is definitely a step in the right direction, but at the end of the day it is about what the members of the unions want, and I think trade unionists in Scotland definitely want decisions made here,” she said.

Fraser said SNP trade unionists will aim to develop their strategy over the course of the conference’s packed agenda on 20 June, which includes a speech from party leader Nicola Sturgeon, and emphasised that the focus would very much be on tackling the wider issues that people in Scotland face.

“We’re going to be looking at the austerity agenda we’re facing in the aftermath of the Queen’s Speech and how we can help build the anti-austerity movement, the impact of the attempt to scrap the human rights act, opposing the new restrictions the Tories have planned on trade union rights, especially strike ballots, all of these issues that are facing workers will be discussed and addressed,” she said.

Fraser recognises that the group has a big challenge in changing its organisation so quickly from such a small group to such a large one, but believes that the way in which the SNP will organise in the trade union movement will develop “organically”.

“I don’t think we want to be too rigid about how we will organise in the unions. We are going to see what sort of support and organisation SNP trade unionists are looking for and help support them, and I think that will develop quite organically. One of the tasks is to link up trade unionists outside the central belt, because the trade union movement is very central belt focused,” Fraser explained.

To find out more about the SNP Trade Union Group conference, visit the website.