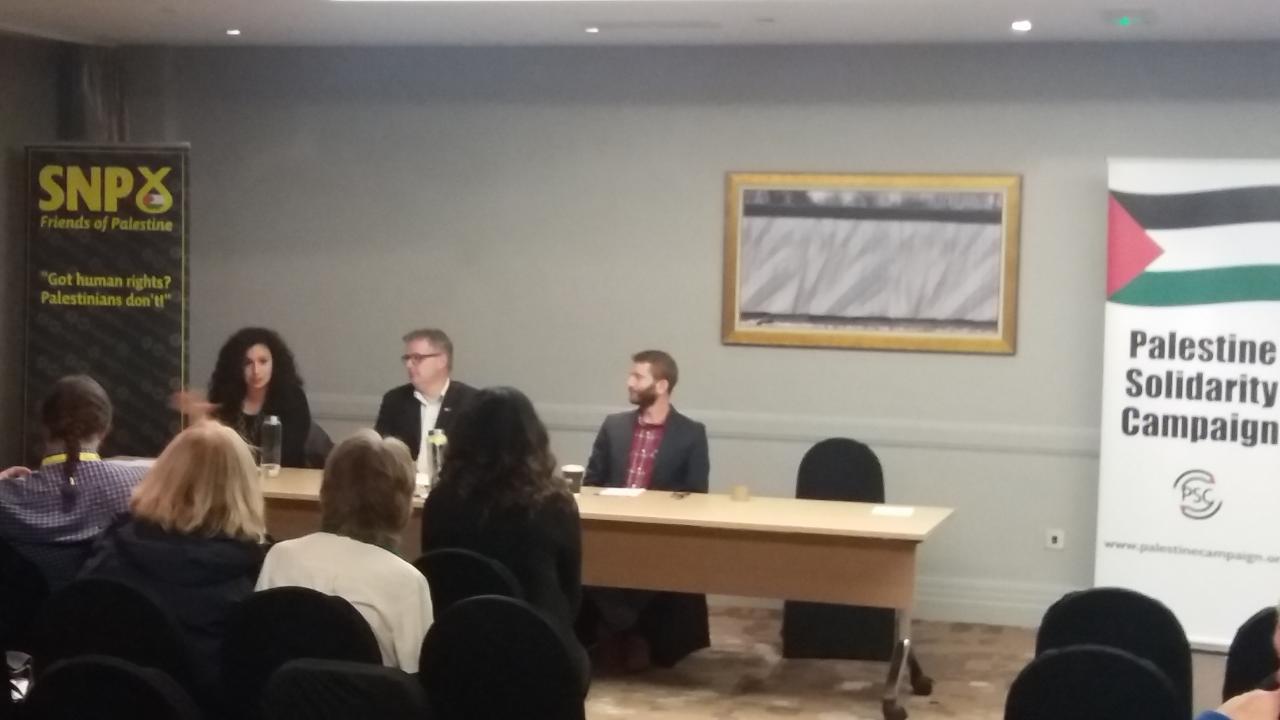 SNP MP Brendan O’Hara said there was “broad consensus” on Palestinian rights amongst the SNP at Westminster, but a representative of SNP Friends of Palestine suggested other SNP politicians were “scared to put their heads above the parapet”

SUPPORT for the Palestinian people and their right to statehood is “absolutely overwhelming” within the SNP’s Westminster group, while the party at large is “fairly unified” in its solidarity, SNP MP Brendan O’Hara has said.

Speaking at a fringe meeting on Palestinian solidarity at the SNP conference in Glasgow today, jointly organised by SNP Friends of Palestine and the Palestinian Solidarity Campaign, O’Hara reflected on his recent visit to Palestine, argued that there was “broad consensus” within the party on the issue, and defended First Minister Nicola Sturgeon’s record on matters relating to the Israeli occupation of Palestinian territories.

In June, the SNP’s Aberdeen conference overwhelmingly backed a motion condemning Israeli assaults on Palestinians during the Palestinian ‘Land Day’ earlier this year. During the ’Great March of Return’ border protests that followed, the Palestinian Ministry of Health in Gaza reported that over 150 Palestinians were killed – including 23 under the age of 18 – while over 17,000 were injured by Israeli use of sniper-fire, rubber bullets, tear gas and other methods of suppression.

However, the motion also triggered fierce debate when it was brought to the conference floor. To widespread boos and heckling, SNP MSP John Mason argued that “anti-Israeli government feeling can spill over into anti-Jewish feeling”, and criticising the motion’s reference to UN resolutions condemning Israel, stating that UN resolutions are “not the gold standard on the issue”.

Asked by CommonSpace for his opinion, in light of these recent events, to what extent there was agreement or disagreement within the SNP on the issue of Palestine and its right to self-determination and statehood, O’Hara replied: “I think there’s broad consensus. You’d struggle to find anybody – other than perhaps the individual you named [Mason] and maybe one or two others – who’d oppose that motion or anything framed in those ways.

O’Hara continued: “I certainly know – though my experience is mainly with the [SNP] Westminster group, obviously – the support for the Palestinian people amongst our Westminster group is absolutely overwhelming. I cannot think of an individual who would have said anything today that I didn’t say. Nicola [Sturgeon] has a long-standing track record of support [for the Palestinian people]. Obviously, we’re a party of 125,000 members – there will be individual noises. But I think as a party, we are fairly unified.”

SNP MP Stewart McDonald, the party’s defence spokesperson, came under criticism from parliamentarians and activists in 2016 after backing an SNP pro-Israel group. McDonald, who was previously a founding member of SNP Friends of Palestine, responded by stating his “support for the people of Palestine is long-standing, well documented and absolutely unwavering,” he said.

Reacting to US President Donald Trump’s decision to recognise Jerusalem as the capital of Israel last year, Nicola Sturgeon said during First Minister’s Questions in December 2017 that “Jerusalem includes occupied Palestinian territories” and that the city should be the “shared capital of the Israeli and Palestinian states.”

“The support for the Palestinian people amongst our Westminster group is absolutely overwhelming.” SNP MP Brendan O’Hara

Also speaking at the event today was Salma Karmi-Ayyoub, Palestinian lawyer and member of the British Palestinian Policy Council, welcomed SNP solidarity with the Palestinian cause, but emphasised the need for “action, rather than words.”

Karmi-Ayyoub continued: “I really think the litmus test for support, for those in authority, isn’t what they say. It isn’t just a matter of all of these SNP MPs who are very supportive of Palestine in their stated positions – although we’re very grateful for that. If you compare them to the Conservative Party, they’re much, much better. But it’s not words that count – it’s what people do when they’re in positions of powers.”

Karmi-Ayyoub went on to encourage those present to raise these issues with “decision-makers” in Scotland, explaining: “The occupation by Israel of Palestinian territories can only be perpetuated because of Western support. We have to be very clear about that; they could not do it without American military and financial aid, but also support – political, military and economic – by European countries.

“We really need other MSPs. They say they’re supportive, and I believe that they are – their sympathies lie with Palestine, but they’re too scared to put their heads above the parapet.” SNP Friends of Palestine representative Nadia El-Nakla

Offering an example in the context of Scotland, Karmi-Ayyoub made reference to the international arms firm Raytheon – which the Daily Record newspaper revealed in 2014 had been producing laser-guidance systems for the Israeli bombs used against Gaza at its plant in Fife – and Glasgow City Council, which backed an arms fair in Glasgow this summer which CommonSpace revealed included the manufacturer of an underwater detection system used to maintain the Gaza blockade.

Nadia El-Nakla, a representative of the SNP Friends of Palestine internal lobbying group also told the event that it was up to the SNP’s grassroots membership to put pressure on its elected representatives, as many SNP politicians are supportive of Palestine but “scared” of saying so.

El-Nakla said: “Ivan McKee, our minister for trade, received 5,000 letters regarding trade with Israel. We got a response back, saying if there are individual companies that we can show are part of the conflict, we can put a case forward to the Scottish Government [to end links with those companies].

“There is a lot happening, but we need to put pressure on our party to take action – words can only go so far. Our members need to be talking to our MPs and MSPs, encourage them to join SNP Friends of Palestine, put out motions, have debates at parliament, have receptions…”

Describing the SNP Friends of Palestine’s active elected members, el-Nakla added: “At the moment, we have about three – Sandra White, Ivan McKee’s now a minister so he can no longer do it, Tommy Sheppard and obviously Brendan [O’Hara].

“But we really need other MSPs. They say they’re supportive, and believe I that they are – their sympathies lie with Palestine, but they’re too scared to put their heads above the parapet.”