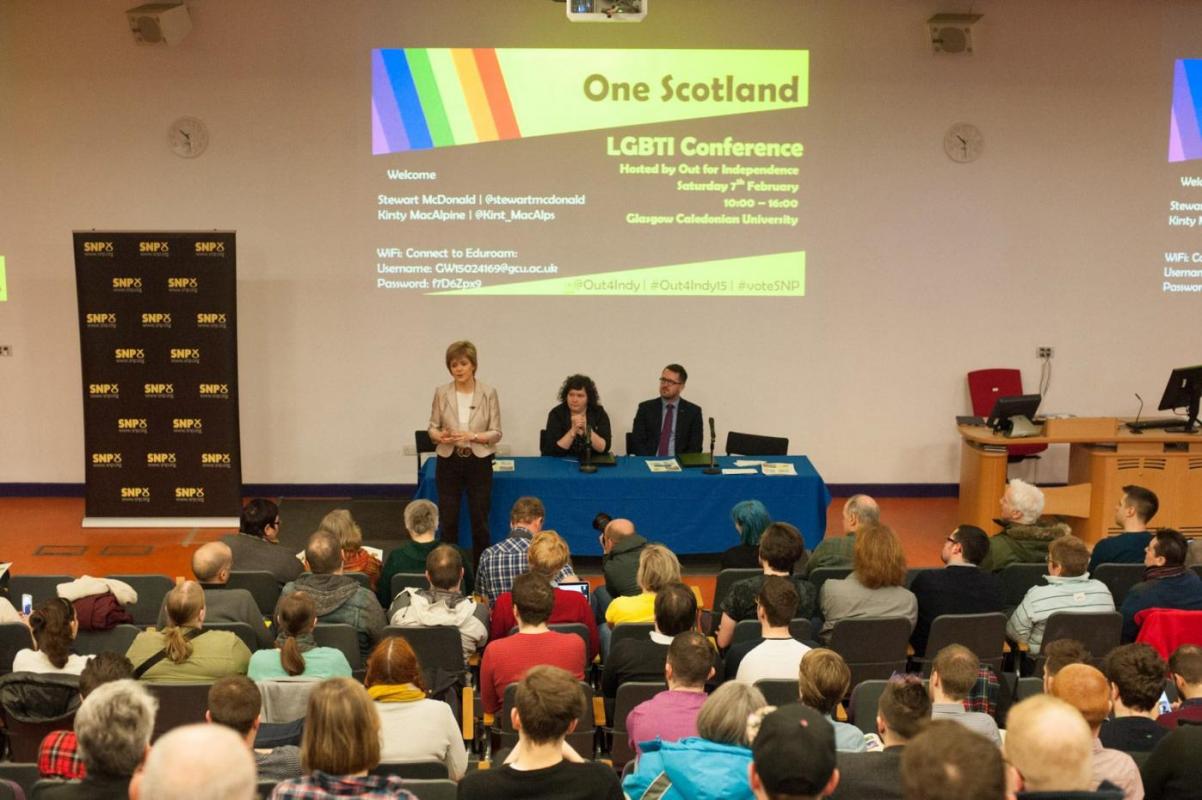 NICOLA Sturgeon signalled that the SNP’s ambitions for May’s elections include changing British foreign policy at a party conference on sexual equality.

The First Minister, speaking at the ‘Out for Independence’ conference on Lesbian, Gay, Bisexual, Transgender and Intersex rights, announced that SNP MPs would support a rights envoy in the foreign office after May’s election.

Sturgeon commented that the party had to “match our actions at home with our ambitions for the wider world” and that investment for international representation would support human rights.

“Too many LGBTI people in too many countries still face the most extreme forms of prejudice and hate – our voice must be one of those arguing and advocating for equality, tolerance and love,” she said.

“That is why a team of SNP MPs elected in May will support the establishment of a special envoy, a diplomatic post within the foreign office, to promote the rights of LGBTI people throughout the word, as an integral part of UK foreign policy.”

The conference celebrated the introduction of same-sex marriage in Scotland, which came into law on Hogmanay.

Alongside recognising progress on equality, Sturgeon raised the need for action on homophobic bullying in schools and reducing stigma in sport for LGBTI athletes.

Conference attendees noted the online reactions to the event – which included a mixture of cynicism and even hostility – as a sign of the need to change attitudes.

The conference also considered a range of political and social issues, including Scotland’s first ever party political event on LGBTI history.

The session addressed the isolation of the 70s and 80s for many campaigners, who sometimes feared expressing their sexuality to friends and family, as well as the campaigners who changed the political climate.

Pam Currie said: “There is a great deal to be celebrated with our history in Scotland. We need to embrace the history of the community and make it known.”

“I was at one of the first gay pride marches in Glasgow in the 1980s. There was a man striding up and down the street in leather pants – and not much else! I remember walking past the Scotia bar [a bar in the city centre] and two wee grannies stopped and saw the march. They put down their messages and started to applaud.”

Street activists who shared contraception to fight the spread of HIV/AIDS in the 80s, and the campaigners who repealed Section 28 from Scottish schools were also remembered.

Cherry stated that although a written constitution presented benefits for the right of minority groups, more work had to be done to strengthen constitutional proposals before any future referendum.

Hopkins explained that the Equality Network had been proved right in supporting the establishment of the Scottish Parliament in 1997. He said that the detail of legislation in Scotland on equalities matters had been progressive, and that the network supports Scotland gaining full powers over the equalities agenda.

Stewart McDonald, one of the founders and main organisers of Out for Independence, remarked: “Two years ago we had 15 people. Today we had almost 200 turn up – so you canny whack that. There’s a new executive to take it forward. Lots of issues were discussed. people want to get active on international issues and issues like the gay blood ban.”