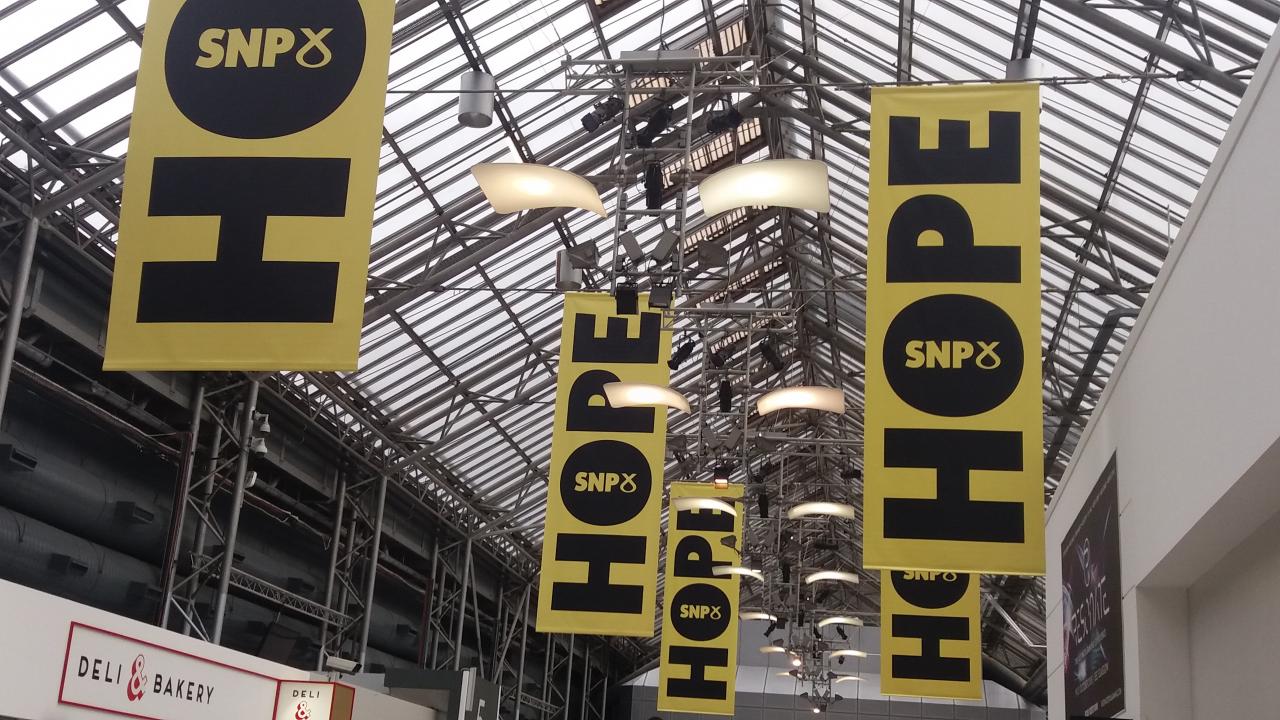 SNP Westminster leader reiterates that the Scottish Government will only accept a deal that keeps Scotland in the single market and customs union.

SNP WESTMINSTER LEADER Ian Blackford has told delegates at the party’s ongoing conference that they can expect “maximum disruption” from the party’s MPs over Brexit, following the release of SNP-commissioned polling that suggests a no-deal Brexit would increase support for independence.

This follows Blackford’s revelation the previous day that he will meet with the European Commission’s chief negotiator Michel Barnier on 25 October, and that an invitation to attend the meeting will also be extended to the Greens, Plaid Cymru and the Liberal Democrats, in the hope of building consensus in parliament in favour of remaining in the single market and customs union.

Opening the second day of the SNP’s October conference at Glasgow’s SEC centre, Blackford characterised Brexit as the chief symptom of “one of the darkest periods in UK politics” and the democratic deficit which Scotland suffers under the Union.

After a passionate defence of the SNP’s record in government, Blackford stated: “The SNP will not sit back and allow Scotland to be dragged out of the single market and customs union against its will. We will not be complicit in a blind – or a no deal Brexit.

“The SNP will not sit back and allow Scotland to be dragged out of the single market and customs union against its will. We will not be complicit in a blind – or a no deal Brexit.” SNP Westminster leader Ian Blackford

“The Tories are on a reckless mission to trash our economy. Their self-destructive policies on Brexit, austerity and immigration threaten serious and lasting harm.”

Promising “maximum disruption” from the SNP contingent in Westminster in order to stall or prevent the likelihood of a Brexit outcome unacceptable to the Scottish Government and the Remain-voting country it represents, Blackford did not go into detail about what such disruption might entail.

However, it follows First MInister Nicola Sturgeon’s recent confirmation that SNP MPs will vote for a second UK-wide EU referendum, and summoned memories of the SNP walk-out in June, when its MPs protested the lack of time given to debate the EU Withdrawal Bill by walking out of the Commons chamber. Blackford referred to the incident yesterday, when he told a fringe event that the SNP would “use every means at our disposal” to oppose a deal that did not include single market and customs union membership for Scotland.

Referring back to impact studies utilised previously by the Scottish Government to demonstrate that there is no ‘good’ Brexit scenario, Blackford argued: “An extreme Brexit threatens £2,300 lost from every person in Scotland; 80,000 Scottish jobs destroyed; the door shut to talented EU workers and our economy smaller, weaker and poorer.

“Time and time again, the SNP and others have fought to ensure that Scotland’s remain vote is respected in the EU negotiations – but the Tory Cabinet is completely in thrall to the hardline Brexiteers who could not care less about jobs, living standards and public services in Scotland.

Blackford continued: “We have proved willing to work to find solutions with Westminster. We have warned the Prime Minister of the turmoil and terrifying damage her Brexit will bring to the people of Scotland.

“We have been clear – the unprecedented economic damage can only be prevented by staying in the Single Market and the Customs Union. But the Prime Minister continues to duck and dive her responsibilities.

“I put the Prime Minister on notice here today – we will not support any deal that threatens Scottish jobs and living standards.”

“We have been clear – the unprecedented economic damage can only be prevented by staying in the Single Market and the Customs Union.” SNP Westminster leader Ian Blackford

Elsewhere in his speech, Blackford revisited several common themes and continuing controversies from the post-indyref period of Scottish politics – condemning the “pain and punishment” of austerity, the end of which Blackford argued was much exaggerated; the rape clause, which he noted that Scottish Tory leader Ruth Davidson had failed to condemn herself; and the hostile environment of Theresa May’s government, which Blackford used as an illustration for why the matter should be devolved.

Calling on delegates to fight for the devolution of immigration, Blackford said: “Scotland needs an immigration policy suited to our specific needs.”

These sentiments were echoed by subsequent speakers addressing the first stage passage of the Refugee (Family Reunion) Bill, with SNP MP Bob Doris arguing that a bespoke immigration system designed and implemented in Scotland “would never treat a 10 year old as appallingly as the UK Government has.”

Blackford also made further, nonspecific calls for an expansion of the devolution settlement, saying: “We must not stop there – more powers in Scotland’s hands are our ambition,” describing the SNP as “hungry for the full economic powers of an independent country.”

Referring to recent polling which shows a small but encouraging shift in favour of independence, Blackford won applause from the conference by expressing with confidence: “Scotland will be an independent nation.”

Echoing Humza Yousaf’s speech the day before, in which the justice secretary said that “radical action” was required to combat society-wide misogyny, Blackford also paid tribute to the efforts of SNP politicians to move towards “radical reform” to “deep workers’ lives and increase living standards.”

Referring to Stewart MacDonald’s private member bill to end unpaid trial shifts, which was talked out by the Tories in the House of Commons last year, Blackford told delegates that the right to fair pay “must be an absolute right for all.”