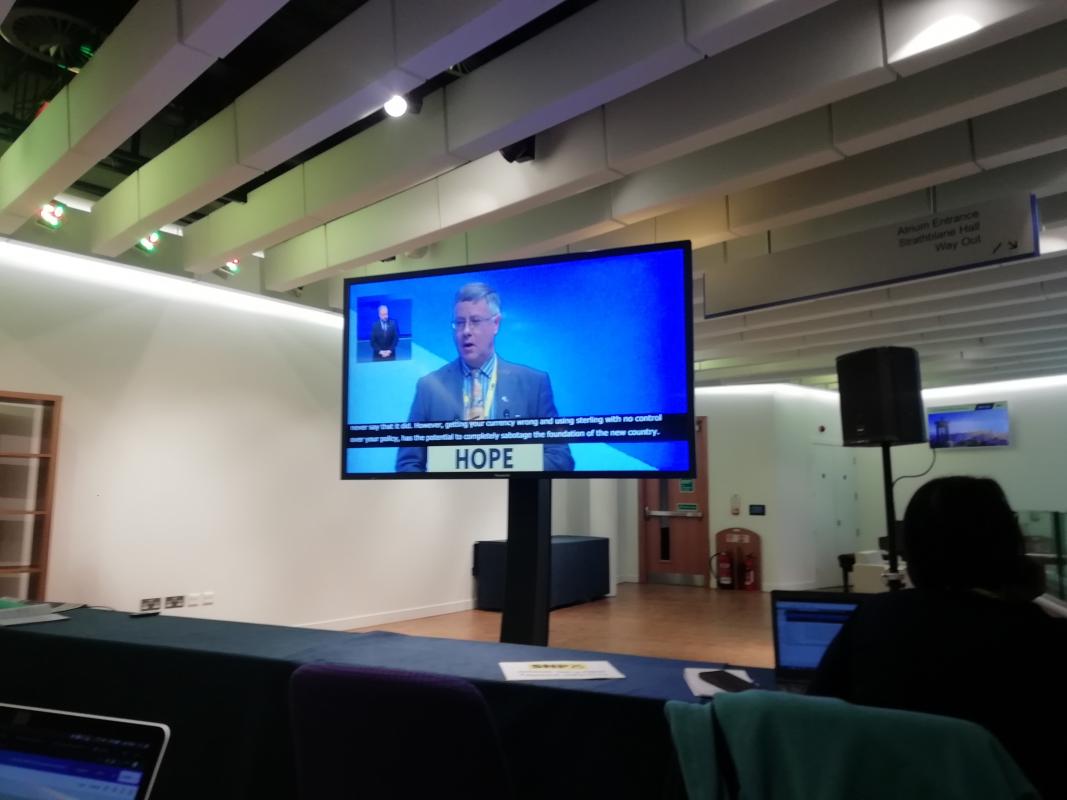 “Nobody can be in any doubt whatsoever that people voting for Amendment D supported the tests, because they don’t,” says Dr Timothy Rideout

TWO key advocates of the amendment which committed the SNP to implementing a new Scottish currency “as soon as practicable” after independence have refuted claims that the amendment did not represent a defeat for the Sustainable Growth Commission’s controversial six tests for abandoning sterling.

At the SNP’s Spring conference in Edinburgh yesterday [27 April], a vote on a motion endorsing key aspects of the Growth Commission saw a majority of SNP members revolt against the entreaties of SNP leadership figures – including depute leader Keith Brown and finance secretary Derek Mackay – and endorse ‘Amendment D’. This amendment shifts the responsibility of instituting a new currency from the advice of a Scottish central bank to a post-independence Scottish Parliament.

However, the fact that the amendment does not explicitly overturn the six tests the Growth Commission has outlined before a new Scottish currency could be introduced, coupled with the defeat of similar amendments which would have removed the six tests from the motion entirely, has led some within the SNP to argue the amendment is in fact an endorsement of the tests.

Following the vote, First Minister Nicola Sturgeon tweeted: “Amendment urges progress as quickly as practicable, and six tests to ensure solid foundation for decision are endorsed. We can move forward now with confidence to make the case for Scotland’s future in Scotland’s hands.” This view was echoed by an SNP press officer, who told CommonSpace that the amendment was “kind of in harmony” with the tests.

“My impression of the reaction of the audience is that the Growth Commission in general is not terribly popular, but the six tests and the currency aspect in particular are not popular with the membership of the party.” Dr Timothy Rideout

Speaking to CommonSpace, Dr Timothy Rideout – who helped draft the amendment, and whose speech at the conference was largely composed of a brutal, one-by-one critique of the tests – has dismissed such interpretations of yesterday’s vote, instead arguing that the amendment’s success represents a repudiation of the six tests.

Dr Rideout argued: “If anyone was listening to what I said, more than half of what I said demolished all six of the tests. Nobody can be in any doubt whatsoever that people voting for Amendment D supported the tests, because they don’t.

“My impression of the reaction of the audience is that the Growth Commission in general is not terribly popular, but the six tests and the currency aspect in particular are not popular with the membership of the party.”

SNP Bannockburn branch secretary Cameron Archibald, who seconded the amendment proposed by Dr Rideout, also told CommonSpace: “Working with Timothy Rideout and others behind the currency campaign, it’s clear that we were definitely not endorsing the six tests.

“The amendment specifically looks at the mechanism of the six tests, and removes Clause 33, meaning that there will be no annual reporting from the Central Bank in regard to them. So in writing, yes, the six tests would exist – but the mechanisms for the six tests are completely gone. Which puts more emphasis on the National Assemblies and the Scottish Parliament having the final say and control over what actually goes on in deciding our future currency.”

Describing how such a decision could potentially be made, Archibald continued: “We can see from the makeup of the Scottish Parliament, the SNP don’t have a majority. If they’re going to have to negotiate with other parties – and let’s be honest, the parties that are going to be most in favour of monetary sovereignty – they’re going to have to come to some kind of consensus. And any delay on any kind of consensus around currency is going to create economic turmoil in the future.

“Of course, I don’t believe there’ll be some sort of apocalyptic vision where parties will be split on this issue; I think there will be some sort of unity. We saw yesterday, in regards to the amendment, it was ultimately accepted, because everyone in the end was happy with it. Between that unity around our proposal, the flexibility of National Assemblies, and ultimate authority being the Scottish Parliament, I believe there can be consensus, and ultimately the six tests will fade into the background.”

Reflecting on the acceptance of Amendment D, but also the defeat of Amendment B, endorsed by former SNP MP and writer George Kerevan, which would have explicitly removed all reference to the six tests from the motion, Dr Rideout said: “It’s a partial victory, but I think we’ve established the position that people need to put forward on the doorstep in advance of a referendum is, in the very short term, an independent Scotland will continue to use sterling, but only until the new currency is ready to launch; and that the period between independence day and the launch of the new currency should be as short practicable.

READ MORE: Analysis: A stunning victory for the grassroots of the SNP and Scottish currency advocates

“I deliberately used the word ‘practicable’ because I didn’t want to specify I fixed date; I’m not trying to say it has to be Day One, because I think that’s silly. It’s open to attack – unionists can say ‘What if you’re not ready?’ In any case, everyone’s going to be either drunk or hungover on the first day of independence.

Explaining further why reference to the six tests was not included in Amendment D, Archibald says: “We were working in coordination with George Kerevan and others on a different amendment. The point was to be a group effort. We originally did want to remove the six tests completely, in writing and in mechanisms, but we thought of instead of going against each other, we could do it as a group. So that’s why we encouraged ditching the six tests, and moving forward to increased sovereignty faster. So we didn’t achieve removing them in writing, but we did achieve removing the mechanisms of the six tests, leaving them as kind of a cloud that really doesn’t have any control.

“So I’m quite happy with the rest. Overall, everyone can claim victory – that’s why Nicola Sturgeon and Keith Brown are saying the six tests are still there. But how can you apply them? Over time, I predict, National Assemblies and the Scottish Parliament will move to monetary sovereignty faster, and that was the will of SNP delegates yesterday.”

Should the SNP leadership continue to present the amended motion as an endorsement of the six tests, Dr Rideout believes the arguments against them should be rearticulated: “I’ll be back at the October conference with a wooden stake and some garlic to spear them through the heart – the six tests, that is.”

Asked what they felt the next move should be for advocates of a separate Scottish currency, Dr Rideout commented: “Well, to continue to educate in the first instance members of the party, but also members of the public. I already have a list of some much more sensible tests that I would like to see people looking at. Have we got the new bank notes designed and printed? Have we figured out how we’re going to manufacture the coins? Have we developed the Scottish bank payment system that would be necessary to implement the currency? Have we identified premises for the Central Bank? Have we sorted out legislation that would have to be introduced in Holyrood to set up the Central Bank? At what point are we going to be able to push the button and say, ‘The new currency is now coming’?

Archibald added: “We’re already encouraged that SNP members want monetary sovereignty for an independent Scotland sooner rather than later. The next step is to take it to the National Assemblies and reach out to others outwith the SNP to hear their views.

“We already know from last year and the year before that the Yes gatherings heavily rejected the six tests and the Sustainable Growth Commissions. We need to reach out to those Yes voters who aren’t SNP members, and see how we can maybe even see outright the rejection of the Growth Commission.

“The best way to convince Scots to back independence is to show them that they have the power. And if you can show that through the National Assemblies, not only will we see a rejection of the six tests, but a greater endorsement of Scottish independence.”

In her speech to the party conference on Sunday, Sturgeon made no mention of the six tests controversy, instead focusing on a new Commission on social justice and fairness.