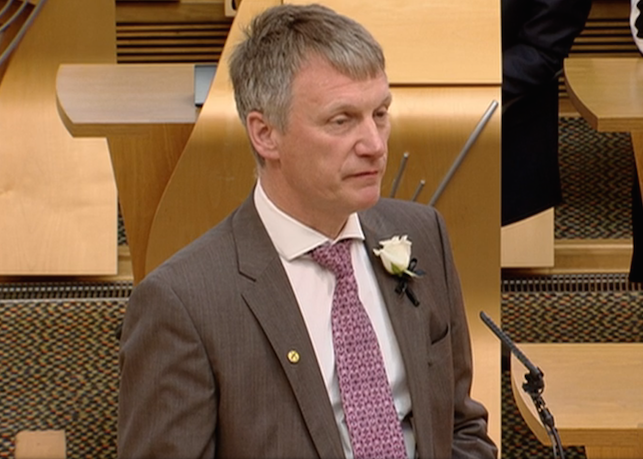 HE ROSE to prominence during the independence referendum speaking about Scotland’s economy. Now Ivan McKee, as one of the SNP’s 17 new MSPs, has responsibility as a parliamentarian and Glasgow Provan’s representative.

CommonSpace spoke to McKee about his first day in parliament, and his decision to leave the day-to-day world of business behind.

What’s your first response to your election as a MSP?

“I’m delighted to be here. The enormity of the task starts to weight upon you and you see how much work you need to do to make a difference. I’m looking forward to start delivering.”

Did you ever expect to be a member of parliament?

“Not until relatively recently. If you’d said to me five years ago or even two years ago I’d never have believed it. After the referendum I seriously considered it and decided to go and do it.”

Do you think being an MSP should be a full time job ?

“I do think so. I've been working in business for the past 11 years or so. When you are an entrepreneur you take risks with your own time and money. Some work out. Some don’t. I have been lucky enough to have been reasonably successful, built up interests in a number of different companies, and managed to create jobs for people as well along the way.

“When I made the decision to get involved in politics full time I was very clear that I would be leaving my business activities behind. I've resigned all my directorships – with the exception of Common Weal – and have sold my shares in all the manufacturing and consultancy businesses I was involved in. The only people I'll be paid to work for going forward is the Scottish parliament.

“I think that is what the people who elected me deserve, full time focus on working for them.”

Have there been any notable moments in your first week?

“The staff have been outstanding. It’s a very well organised induction and the staff were falling over backwards to help you. Hopefully as we go into dealing with the legislation and the committees we can keep up that level of support.”

Nicola Sturgeon swore her “loyalty” to “the people of Scotland” at the opening of parliament. What does that mean to you?

“It’s very important. It was decided that Nicola [Sturgeon] would make that statement on behalf of the whole group. Alex Salmond did that in the past. It’s SNP tradition that that statement is made.”

There were SNP members protesting outside the parliament against fracking. What’s your view?

“I wasn’t aware of that because I was in early this morning. I hadn’t seen that. But I think the fracking position is pretty clear. We have a moratorium which means there is no fracking. There won’t be any fracking.”

What are your plans in your first week as a MSP?

“I’ll get back as often as possible to Provan. That’s my mission, and I’ve got a list as longs your arm of people and organisations I want to see, and want to see me to start working on the issues that are important to people.”

The lowest turnouts in the election was in poorer constituencies, particularly in Glasgow.  Does that emphasise the challenge Scotland has to overcome problems of inequality and lack of participation?

“It’s a huge issue. In general turnout across the country was up five per cent. In Provan it was up from about 34 per cent to about 43 per cent. It did come up, but it was still the lowest in Glasgow, which is obviously not good. A big part of that challenge is to work with the other political elected representatives to engage with as many people as possible so that the public understand we can get things done. It’s an important measure of what we can achieve over the next five years.”