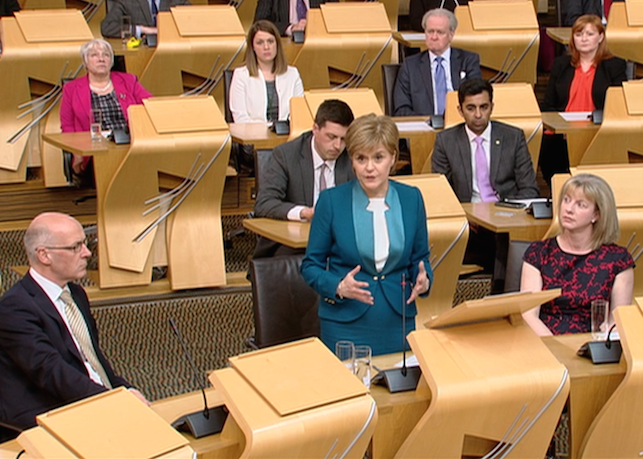 NICOLA STURGEON has officially been re-elected as first minister of Scotland.

The leading role in the Scottish Government is elected by members of the Scottish Parliament, where the SNP now hold 63 of a total 129 seats.

Sturgeon won 63 votes – far ahead of any other candidate for the post. Liberal Democrat leader Willie Rennie stood for the role, he said to highlight the minority status of the government, and received only 5 votes. 59 MSPs abstained.

Speaking to the chamber, Sturgeon promised to focus her leadership on education and the economy – reaching across party boundaries to improve policy.

“I promise to use all of the powers that this office places in my hands to make our country an even better place to live,” she said.

The vote follows the fifth elections to the Scottish Parliament, won by the SNP by a substantial margin. Due to the parliament’s proportional electoral system, the party will have to cooperate with others to pass legislation and budgets as it is two seats short of an overall majority.

Sturgeon said the result gave her an overwhelming “mandate” to become first minister and deliver the party’s manifesto.

Rennie, who admitted his 12 year old son was sceptical over his decision to stand, said he stood to emphasise that minority government means cooperation. “We are all minorities here,” he added.

Labour leader Kezia Dugdale urged the SNP to “be bold” and “challenge vested interests” in its next government.

Tory leader Ruth Davidson chose not to stand in the contest, given her campaign in the Scottish election was based upon forming the parliament’s main opposition.

Sturgeon’s next test is to select a full government of cabinet and junior ministers this week.