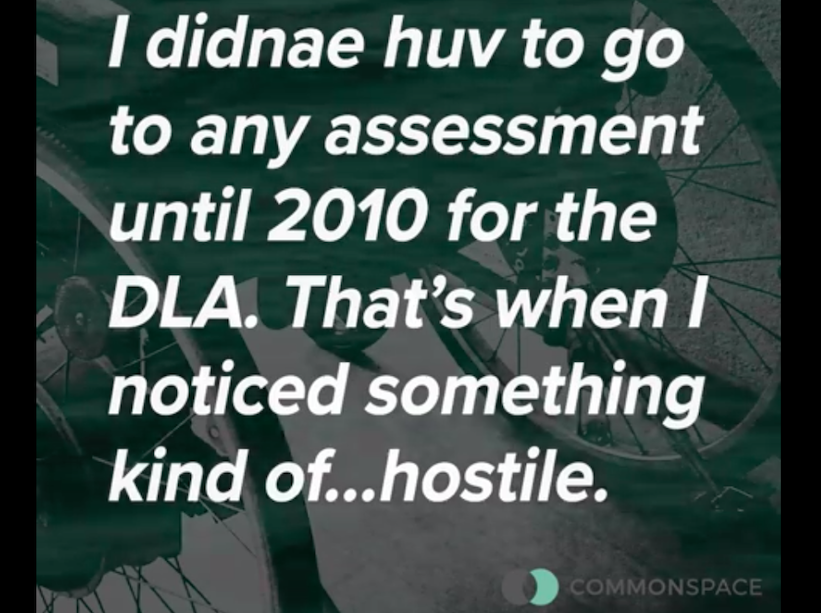 Three part series on one person’s journey through the benefits system.

IN PART 2, Anne has to deal with changes to the benefits system introduced by the Tory-Liberal Coalition Government in 2010.

Part 2 – The Change: ‘So why haven’t you killed yourself?’

When I first went on to DLA obviously I was in the spinal unit and it was a social worker that filled all the forms in for me. I didnae have to go to any assessment because it was takin’ that what the doctors and the social workers said was right. You know? I didnae huv to go to any assessment until 2010 for the DLA. That’s when I noticed something really kind of…hostile, is the word. It was just that thing about right away you felt “Wait a minute here. These people don’t believe me.” And it was, it was horrible. It was degrading. Yeah.

2012 is when I went for my Employment Support Allowance assessment at Cadogan Street and fae the minute I walked through the doors I found the environment hostile. Because my mental health had deteriorated so much by that point. It’s probably important to mention as well that I’m a recovering alcoholic and when I had my accident in 2004 that’s when I stopped drinking as well. So I was trying to negotiate a sober life and it felt like overnight I went fae bein’ a productive member of ma society tae a scrounger and skiver.

And I remember suddenly seeing stuff in the media. Like aboot aw these scroungers and skivers that were at it and it felt like a hostile environment and fae the minute I went through the doors at Cadogan Street because ma anxiety and my mental health was so poor I remember sitting in the waiting room like literally shaking from head to foot and tears I was so embarrassed, you know. Not one person came up tae me tae say “Are you alright? Can I get you a glass of water?” Even when I got into the interview room this so called health professional seemed completely blind to the fact that I was obviously seriously mentally distressed.

READ MORE: One person’s journey through the benefits system: Part 1 of 3

Now the thing is when I came oot of that assessment right, and for years after I could’nae tell anybody what I had been asked. I was so traumatised when I came oot of the interview because right away folk were sayin’ to me “What kind of questions were they asking you?” And I was like “I cannae remember. I cannae remember.” But what I dae remember was coming oot o’ that building’, and this is the honest truth, coming oot o’ that buildin’ and being determined to go hame and end ma life. I had never went through such a degrading experience. I felt like I was havin’ to justify myself and it was nae until a couple of years ago that a woman spoke out in the media about being asked this question: “So why haven’t ye killed yerself?” And I swear to god when I read it that day it was like a massive flashback and I clearly remembered, I could even remember the tone of his voice: “So why haven’t you killed yourself?” And that’s why I was so traumatised ‘cause efter that question aw I could think of was “I’m going to kill myself. I’m going to kill ma…I cannae do this. I cannae sit and justify to people how I’ve managed tae no kill maeself.”

Efter I’d been for the assessment I realised just how horrific the whole situation had become. And how hostile the environment had become towards disabled people. And that’s why I’ve been part of that fight back since because it’s … anybody can become sick or disabled there’s so many I huv to say especially working class wimmen who are entitled to benefits who urnae applying fur them. They’d rather live in poverty than go through that horrendous assessment process that they are probably going to get turned doon anyway and so they just say: “you know what I’m not”, and it’s no even just DLA it’s happening now it’s actually with Employment Support Allowance. There’s a whole sort of black economy, starting, where people are just committing crime or doing whatever they need to do to get by rather than going through that process.

READ MORE: Neil McLeod: Want proof austerity is about putting the poor in their place? Look at the benefits appeals system

Ma mental health since that interview in Cadogan Street – my psychiatrist and ma doctors have all agreed – been in decline. I would, yeah, 2012 I went back to university and got a post-graduate and went to do some voluntary work with the full intention of going back to work. Unfortunately my experience within that organisation that I was doing the voluntary work for again set ma mental health back to a really serious degree. And that’s when I discovered that volunteers have absolutely no rights what-so-ever. I feel now that disabled people that’s pretty much what we get offered: “You’re no good enough tae work for us, tae pay ye, but come and work fur us fur nothing and we might, we might gie ye a good reference in six months time.” Apart fae if the boss disnae like ye.

There is a narrative developing even in amongst disabled people. Who constantly refer to these “scroungers and skivers” and “it’s their fault that we are being penalised”. And it’s like…ideology is a very powerful thing and I genuinely believe that fae 2011 onwards and even to, because the, the work capability assessment was brought in in 2008 by the Labour government, it wisnae until 2011 that it was private companies that were daein’ it.

it’s right through society now. You know, the idea that we’re aw scroungers and skivers and we’re aw at it. That is just set in people’s minds noo. I, I firmly believe that people genuinely now believe this narrative that has been getting pushed through our media for so long. People just believe it now. And if they’re no blamin’ immigrants for losing their benefits they’re blamin’ other disabled people. I heard about a group that was set up a few years ago, I can’t remember what they were called, these were people with physical disabilities who were basically sayin’ “We’re like really disabled, see aw they mental health folk? They’re aw the scroungers”. I don’t know what happened to that group, thankfully they disappeared. But there you go. The starkness of the divide between the disabled community as well. It’s heart breaking.

If the issues discussed in this article have affected you, contact the Samaritans free on 116 123, email jo@samaritans.org or visit samaritans.org for more information.