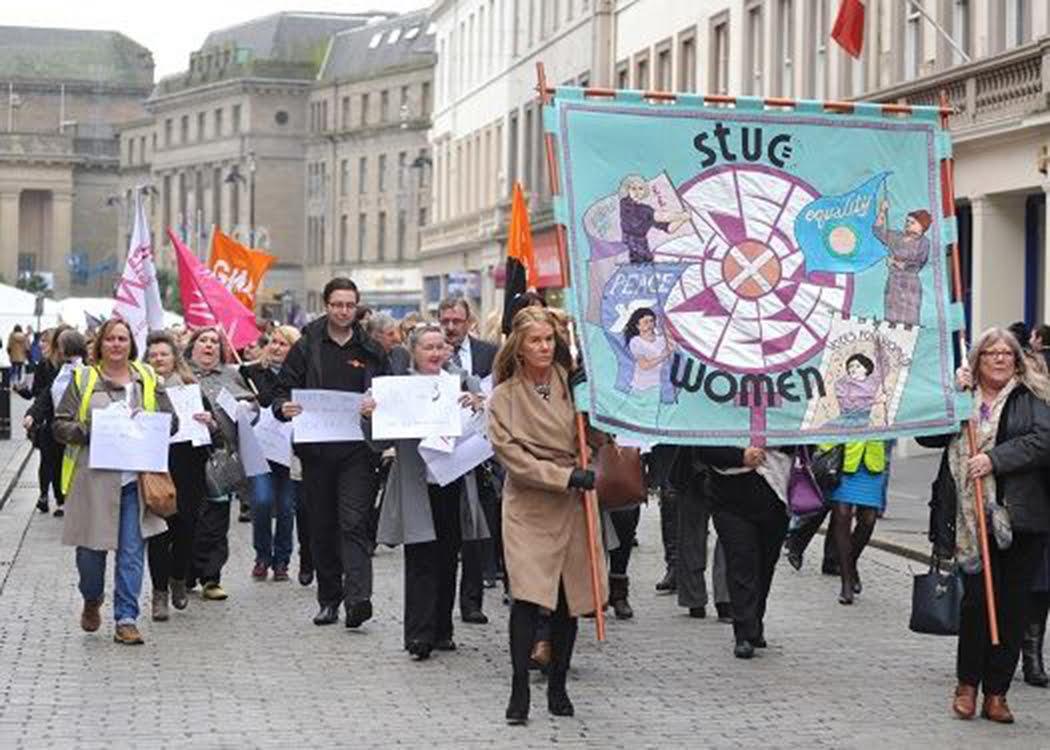 Trade unions are struggling to recruit young people in Scotland and, according to activists and academics, there are a number of barriers to youth engagement in the movement

YOUNG PEOPLE will, in coming months, march onto the picket line with their veteran trade unionist brothers and sisters and launch militant resistance against the Conservatives’ anti-trade union bill.

At least, that was the image evoked by Scottish Trades Union Congress deputy general secretary Dave Moxham in his article for the Sunday Herald (6 February) predicting a confrontation between unions and the UK Government.

In so doing, he was doubtless making an appeal to the continued relevance of the trade union movement in the 21st century. Yet it is no secret that trade unionism has difficulties attracting young people in Scotland.

By the STUC’s own most recent figures, only 11 per cent of Scottish workers aged 16-24 are trade union members.

Young workers’ views towards trade unions are contradictory. Eighty-six per cent say they know little or nothing about trade unions, yet 63 per cent of workers under 30 believe that trade unions are beneficial for pay and workplace conditions. And they are right: unionised workers earn on average eight per cent more than their non-unionised counterparts.

Yet for many young people, their enduring image of trade unions comes from a bygone era of industrial militancy – usually at least as old as the great miners strike of 1984-1985, over 30 years ago.

The unions have made some moves towards renovating the way they communicate, including making forays into social media and mainstream advertising.

But Sean McLaughlan, a 23-year-old-trade union activist, one of those young activists referred to by Moxham, says it is “undeniably” the case that trade unions still need to update their image.

McLaughlan also recognises this is true of many public bodies.

He says: “This isn’t exactly unique to trade unions. One only has to look at the antiquated and archaic rules that govern Westminster parliamentary process to realise why so many young people can potentially become disenfranchised from the entire political system.”

Indeed, trust in public institutions of all kinds has collapsed in recent decades. In 1987, 76 per cent of the UK public believed it was a ‘duty’ to vote. By 2009, just 58 per cent attached the same importance. Trust in the UK Government fell by a massive 26 per cent between 1997 and 2009.

Yet today in the UK, trade unions remain more trusted than most public and political institutions. Trade union officials are trusted by 34 per cent of the public; higher than business leaders, politicians and journalists.

“If the faces of trade unionism are male, stale and pale; how can this relate to the young workers they seek to represent.” Stella Rooney

For Stella Rooney, a 17-year-old school student just getting into trade union activism, but not yet a trade union member herself, the unrepresentative nature of trade unions still poses a problem: “If the faces of trade unionism are male, stale and pale; how can this relate to the young workers they seek to represent?” she says.

Indeed, despite the fact that 55 per cent of UK trade unionists are now women, the trade union movement can boast just a handful of female leaders for its 54 separate unions.

For professor of industrial relations at Bradford University Gregor Gall, while factors around the presentation of the trade union movement do matter, they are peripheral to the main problem – a lack of trade union militancy and effectiveness in recent decades.

He says: “The key is becoming a credible solution to workplace injustice and here the challenge is the same for other/old workers too. No amount of good social media can replace being credible.”

According to Gall’s argument, unions which do not take effective action are unlikely to attract young fighters.

The recruitment ramifications with with regards to young people should be particularly acute, since even relative spikes in trade union combativeness since 1991, such as in 1996, 2002, 2007, and 2011, were the result of set-piece public sector stand-offs (usually one-day strikes).

“No amount of good social media can replace being credible.” Professor Gregor Gall

“Young people probably work more in retail, leisure, hotels etc than elsewhere and density there overall is extremely low so their density will be even lower. On top of that there is high turnover in these jobs, employers are hostile,” Gall explains.

But the weaknesses of trade unions don’t mean that young people aren’t involved in protesting social injustice. The decline in strike activity has been matched by a rise in other forms of protest activity.

In the first five years of the 21st century, 1.2 million young people in the UK took part in legal protests. There were more protests recorded in the UK media in 2015 than in any year since before 1980.

In an attempt to adapt to this mood of protest activism, the trade union movement has turned to new models of ‘social unionism’ which take the movement out of a workplace setting and into diverse social movements.

Rooney is involved in one of the STUC’s ventures into social unionism – the Better than Zero campaign, which uses innovative and theatrical protest techniques to shame bad employers. The protest movement is an example of trade unionism catching up with modern marketing techniques; in this case in this case so-called ‘experiential’ marketing, with unsuspecting members of the public drawn into protests such as flashmobs and artistic performances.

The Unite Community membership scheme – which recruits card-carrying members of the union who are not attached to workplace branches – was launched in 2012.

It’s Scottish outfit was important in lobbying the Scottish Government to mitigate the bedroom tax. It has also won small victories campaigning against fuel poverty and zero-hours employment in Glasgow and Edinburgh.

Unite itself claims to have attracted up to 20,000 new young members UK-wide through these types of social union campaign methods.

Jack Ferguson, a former organiser for Unite Community members in Scotland, tells CommonSpace that the scheme is designed to tap into youth politics.

He says: “The Community Membership project came out of a recognition at the highest levels in the union that, in the face of Tory austerity, trade unionists needed a link with more dynamic, spontaneous or direct action based groups.

“I think that campaigns and tactics like this are essential if unions are to attract young people and survive.”

But he also senses a tension in trade unionism between new experimental approaches and keeping huge union machines like Unite ticking over.

“Direct action campaigns and tactics like this are essential if unions are to attract young people and survive.” Jack Ferguson

“In every region of the UK Unite has organising departments dedicated to recruiting new members and increasing density in workplaces where we have representation. Of necessity, they must prioritise their time on key targets in vital sectors of the economy,” Ferguson says.

“But this means that the type of job young people typically have access to – service industry, precarious, private sector and with little recourse to legal rights – are not important priorities for the union movement as a whole. While the need for this is understandable, it risks widening a generational disconnect,” he adds.

There is, probably, no single reason for the under representation of young people in Scottish trade unions.

It took generations, with many victories and setbacks along the way, to build the UK’s trade unions up to the point where they could win substantial benefits for their memberships in the middle decades of the 20th century.