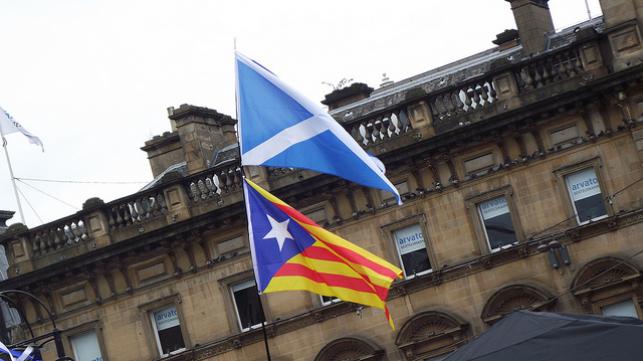 THE CATALAN DEFENCE COMMITTEE SCOTLAND (CDCS) have called for a rally outside the Scottish Parliament on 21 December to show solidarity with the people of Catalonia on the day of their historic election.

The move comes as Catalonia’s regional election campaign reaches its climax with polls on a knife-edge: according to polling conducted today by the National newspaper, the unionist, pro-Spain bloc may win up to 57-61 seats in the Catalan parliament, but even under a best case scenario, would be short of an absolute majority by at least 7 seats.

Meanwhile, the pro-independence parties remain collectively ahead, but could lose the absolute majority secured in 2015, and if the National’s polling proved accurate, could drop from 72 seats to 57-61. The predicted turnout for the election remains high, currently standing at 82.99 per cent, up from 73.95 per cent in 2015.

“The recent months of brutal repression and the continuing strangulation of the democratic process means that international solidarity is vital.” Jonathon Shafi

Spurred by the Catalan parliament’s declaration of a Catalan republic in defiance of the Spanish Government, which in turn followed the violent attempted suppression of Catalonia’s 1 October independence referendum by Spanish authorities, the election campaign has been mired by accusations of anti-democratic obstructionism by the Spanish Government, who have banned official international observers from overseeing the vote.

Catalan Vice-President Oriol Junqueras remains in prison on charges of sedition following his role in the declaration of the Catalan republic, and on Tuesday a Spanish state prosecutor urged the Spanish Supreme Court to reject a pending appeal by Junqueras to be freed ahead of the election, in which Junqueras’ party, the Republic Left of Catalonia, is expected to be among those winning the highest number of votes.

Speaking on behalf of the CDCS, Scottish writer and activist Jonathon Shafi told CommonSpace: “As the Catalan elections get under way, we will stage a rally outside the Scottish Parliament to show solidarity with he people of Catalonia in defence of democratic rights.

“We hope to be joined by many MSPs showing their support for the right to Catalonian self-determination.” Jonathon Shafi

“The recent months of brutal repression and the continuing strangulation of the democratic process means that international solidarity is vital – especially as Spain says it is to ban international observers.

“Our rally will hear from Catalans, political parties, trade unions and social movements – and we hope to be joined by many MSPs showing their support for the right to Catalonian self-determination.”

A list of speakers or guests at the rally was not available at the time of publication. The rally will be held outside the Scottish Parliament on 21 December at 11am.