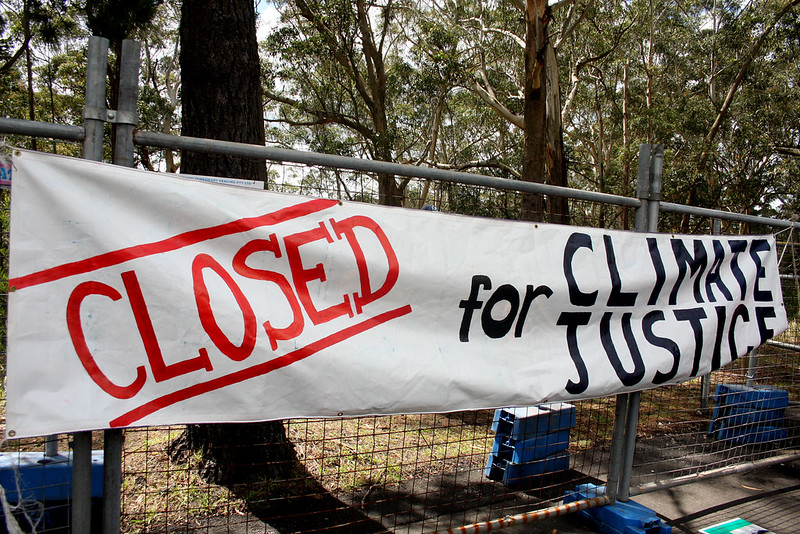 Sophie Unwin argues that the most effective way of combating climate change may be to recognise how the issue intersects with human rights, and build a remade economy which addresses both

AT THE climate justice world forum at Glasgow Caledonian University a few months ago Professor Kevin Bales from Nottingham University made an interesting claim: it might be easier to tackle climate change by talking about eradicating slavery than about climate impacts – not just because it’s easier to get consensus on the need to end slavery, but because the activities which involve slavery are those that extract the greatest amounts of resources. It’s not by accident that his 1999 book is titled “Disposal People: New Slavery in the Global Economy”.

Climate justice gets to the heart of the issue of how climate and human rights intersect by reminding us that it’s the people who consume the least resources who are disproportionately affected by the impacts of climate change. Environmental refugees are a symptom of the problem; displaced by drought, flood or sea level rises, those who live most lightly on the land are then doubly punished when they are vilified as ‘economic migrants’ for trying to build their lives elsewhere. The rag-pickers who make a precarious livelihood on waste dumps in Manila, Mumbai and Sao Paulo are seen as marginal outcasts, but they are the ones literally cleaning up the ecosystem at the risk of their own health.

But climate justice is not just something affecting other countries, we can see it in Scotland too. It’s always more deprived communities that need to fight pollution, landfill and incineration plant in their neighbourhoods. Like Coatbridge in North Lanarkshire – where a school was built on a former landfill site with toxic materials and incidents of serious illness were found as well as blue water coming out of taps, or Mossmorran in Fife, where the chemical plant regularly burns of excess gas in a process known as ‘flaring’ – just like plants in Nigeria. These are poorer communities that bear the brunt of a system where we pollute in order to profit and over consume and are crying out for new industry.

Building a new economy means both taking a new perspective and doing things differently. With a new lens, we erase the false dichotomy between ‘jobs’ and the ‘environment’ and relocate power with people. It’s local communities who know what they need in their own areas, who can map their own lives, and who can voice what facilities they need. As Kevin Bales said, it’s the indigenous voices we need to listen to, the ones who are saying they want their forests back – who’ve heard from their grandmothers about how the trees provide cloth and food and make the temperature cooler.

This cuts to the heart of Common Weal’s work advocating for a Green New Deal – thinking boldly and imaginatively about the new economy we need to see for everyone to flourish. It’s not just behaviour change we need to call for – it’s wider cultural change and system change rooted in social and environmental justice.

READ MORE: Robin McAlpine: I want to rig the economy – but differently

Remade Network is on a mission to help this happen with our work building a repair economy. We are working collaboratively to set up community reuse and repair hubs across Scotland, and further afield, and have provided training to over 20 communities since we set up a year ago. This work is born from experience co-founding the Remakery in Brixton in 2008, which led to setting up the Edinburgh Remakery in 2011 (borrowing its name from Brixton)- a seven year journey developing a viable social enterprise model.

“For too long, people have been blamed for not reusing or repairing enough when the facilities don’t exist for them to behave differently”, is the rallying cry of Ann Link, scientist and ex-Director at Women’s Environmental Network, who initiated the UK’s Waste Minimisation Bill in 1998. Ann, my former boss and mentor, is an inspiring figure and a pioneer in calling for local authorities to go beyond recycling. After all, we can recycle more and more without the overall volume of waste decreasing. So, we need to think differently and design waste out from the outset instead.

Teaching people to fix things helps build a new mentality – one about keeping household goods for longer, thinking about how they are made and disposed of, and building confidence, new skills and resilience in the communities that can access repair services. And crucially, repair creates 10 times as many jobs as recycling (Institute for Local Self-Reliance).

The privilege of working with different communities means understanding what is unique about each place: this is not a one size fits all approach, it’s about adapting a set of principles and learning to work collaboratively in response to each community’s needs. Diversity is key and one of our cherished values – it’s what helps build resilience and allows new projects to flourish. Each centre will work with and welcome a mix of people, have multiple income streams, and value and celebrate ecological diversity.

We need to remain clear-sighted about our ultimate objectives – tackling climate change and inequality. This means ensuring that new remakeries and other repair projects aren’t primarily commercial brands leading to gentrification of areas but are true collaborations that listen and support the people who need their services that give people agency and bring people together to make places more liveable. And doing so in a way that create projects that aren’t endlessly propped up with grant income – but can be financially resilient.

It seems like the moment is well-timed for this work. The 10 years of experience of setting up remakeries in Brixton and Edinburgh and working with communities across Scotland and further afield  has given the Remade Network a treasure chest of useful learning that we’re now sharing with others – warts and all. As a recent trip to Jura with Repair Cafe Glasgow to run a repair workshop taught us – repair culture is very different in different contexts. In Jura people brought in 30 items in 3 hours – from hair straighteners to wonky tables. And the afternoon was a day in bringing together and sharing stories about what those objects meant to people. In Belfast,a city with a proud industrial past, Christine McCartney and Lee Rob at Repair Cafe Belfast are not only providing repair education workshops across the city, they are promoting existing repair businesses – helping build the local community and the local economy hand in hand.

READ MORE: Sophie Unwin: Remade in Edinburgh, and the vision of creating a network of community reuse and repair centres

Responding to the climate emergency means more than a technological solution, it means empowering communities to take action and to harness the skills they already have. The way Remade Network works is to collaborate with these communities, sharing a ten-step process of how to set up centres where people can come and fix their household objects – and create jobs in the process. This work is closely embedded in place and combines advocacy work with the repair training. In effect we’re doing something very radical – challenging consumerism – through doing something very practical – creating new markets in repair education.

Just imagine if old mills and mines across Scotland were converted into factories where we fix the things that we throw away, telling the story of how our  furniture and computers  clothes  are made, the energy it takes to process  their components, and what happens when we export them ‘out of sight and out of mind’.

There is so much indigenous knowledge and skill that we need to recognise in this work. For me, the journey towards building repair projects came from a year living in rural Nepal and creating less than a dustbin of rubbish – because fixing was part of the culture. And returning to my native London, being frustrated that it was cheaper to buy new than to keep fixing my everyday goods – and that the people with fixing skills weren’t making an adequate living from them. Repair is not a new idea, we just want to bring it back into the mainstream.

In doing this we need to get away from the idea that the circular economy is just about efficiency gains – it must be about social and environmental justice too. After all, if a business is ‘more circular’ then it is an oblong – not a new design. We need to redesign the activities that we undertake and the businesses that we create from the outset. In doing this I come back again to the principles of collective action, collective decision-making, and collective resources that underpin our work.

As renowned economist Ann Pettifor puts it in her brilliant book ‘The Case for a Green New Deal’: “private sufficiency and public luxury”.