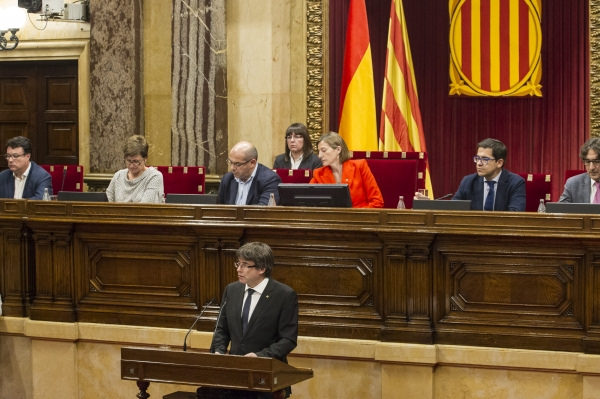 As Catalan Government fails to withdraw declaration of independence, Spanish Government announces it will suspend Catalonia’s right to govern itself

THE SPANISH GOVERNMENT will impose direct rule over Catalonia in its latest bid to suppress the consequences of the 1 October Catalan independence referendum.

The declaration – made in recognition of the pro-independence vote’s referendum victory – was, almost immediately suspended by Puigdemont to allow for negotiation with the Spanish Government.

However, calls for such dialogue have been ignored by the Rajoy’s administration, which is now preparing to follow up on its threat to activate article 155 of the Spanish constitution, which will suspend Catalonia’s regional autonomy and transfer its powers to Madrid. Article 155 has never been employed in the 40 years since the death of fascist dictator Francisco Franco.

The Spanish Government’s intransigent stance is consistent with its argument that the Catalan referendum was illegal under the Spanish constitution, an argument backed by Spain’s constitutional court.

Despite the referendum’s supposed illegality, more than 40 per cent of Catalonia’s 5.5m eligible voters took part in the plebiscite. More than 90 per cent of the votes cast were in favour of independence.

The Spanish Government said in a statement: “At an emergency meeting on Saturday, the cabinet will approve measures to be put before the senate to protect the general interest of Spaniards, including the citizens of Catalonia, and to restore constitutional order in the autonomous community.”

The Spanish Government argued that Catalan authorities were “deliberately and systematically seeking institutional confrontation, despite the severe damage it’s causing to coexistence and Catalonia’s economy”.

In response, Puigdemont has said that a full, unambiguous and practically binding declaration of independence could be made if Article 155 is put into effect, which he characterised as part of the same repression as the violent actions of Spanish authorities during the referendum, as well as the recent arrest of two high profile Catalan leaders on charges of sedition.

In a letter sent to Rajoy shortly before the deadline passed, Puigdemont wrote: “The people of Catalonia, on Oct 1st, decided on independence in a referendum with the approval of a high percentage of the electorate. A percentage that was higher than that which allowed the United Kingdom to begin the Brexit process and with the votes of more Catalans than voted for the Catalan Statute of Autonomy.

“On October 10th, the parliament celebrated a plenary session in order to evaluate the results of the referendum and effects therein; and where I proposed suspending the effects of that popular mandate.

“I did so to encourage the dialogue that has been repeatedly suggested to both you and me by social and political leaders and institutions from all over Europe and the rest of the world. To that end, in my letter on Monday, I proposed holding a meeting, but have yet to receive a response.

“If the Spanish Government continues to block dialogue and to continue repression, the parliament of Catalonia will proceed, if it deems opportune, to vote on a formal declaration of independence.” Catalan President Carles Puigdemont

“Similarly, my request that repression be reversed has also received no response. On the contrary, it has increased and has included the incarceration of the president of Omnium Cultural and of the Catalan National Assembly, organizations that have long been recognised for their civil, peaceful, and democratic actions.

“This suspension continues in effect. The decision to apply Article 155 is up to the Spanish state, with previous authorisation of the Senate. Despite these efforts and our will to open a dialogue, the fact that the only response is the suspension of autonomy indicates that you are not aware of the problem or that you do not wish to speak about it.

Puigdemont continued: “If the Spanish Government continues to block dialogue and to continue repression, the parliament of Catalonia will proceed, if it deems opportune, to vote on a formal declaration of independence that it did not vote on on October 10th

The text of Article 155 reads as follows: “If a self-governing community does not fulfill the obligations imposed upon it by the constitution or other laws, or acts in a way that is seriously prejudicial to the general interest of Spain, the government, after having lodged a complaint with the president of the self-governing community and failed to receive satisfaction therefore, may, following approval granted by the overall majority of the senate, take all measures necessary to compel the community to meet said obligations, or to protect the above mentioned general interest.

“With a view to implementing the measures provided for in the foregoing paragraph, the government may issue instructions to all the authorities of the self-governing communities.”