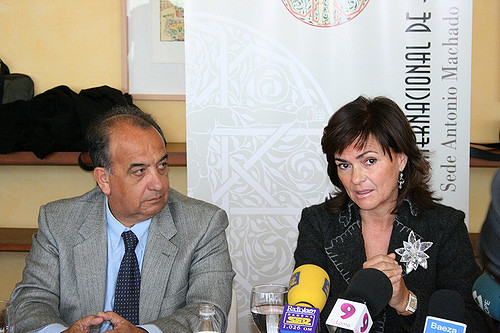 THE SPANISH deputy Prime Minister has erroneously claimed that the Scottish independence referendum in 2014 was not agreed between the Scottish and UK Governments.

The Agreement has regularly been cited by supporters of Catalan self-determination in Spain as an example of how to resolve the political crisis in Catalonia over whether the country should become independent.

But Carmen Calvo appeared to deny that the Edinburgh Agreement ever happened, saying in an interview with the Catalan Radio Station RAC1, “in Scotland there was no agreed referendum”. The interviewer replied by exclaiming “What!?” but Calvo did not respond directly, instead moving on to say: “For Cameron, who will probably not go down in history as one of the best European leaders, not only did this situation get out of hand, but so did a bigger one,” in reference to the EU referendum and the vote to Leave.

“There was no agreed referendum in Scotland,” said the Spanish vice president ➡️https://t.co/XDF2JPVggU. pic.twitter.com/NN0Cokt3dB

Calvo, who is part of Pedro Sanchez’ PSOE minority Spanish government which came to power in June, went on to reject the possiblity of a future referendum on Catalan independence, stating that: “There is no possibility to hold a referendum for a breakup of the territory”, adding that this is not possible in Spain or in other “comparable democracies”.

She added: “In democracy, even above any decision we can take, there is the legal security and the rules of the game, which citizens directly decided.”

By “directly decided” the deputy Prime Minister was referring to the post-Franco Spanish constitution agreed 40 years ago, which stated that the unity of Spain was “indissoluble”.

This was held up by Sanchez’ predecessor, Mariano Rajoy, when the pro-independence Catalan Government sought a legally binding referendum last year. In the end, a referendum was held without the go ahead of the Spanish Government, leading to brutal repression by the Spanish police force, Guardia Civil.

Rajoy implemented direct rule from Madrid and nine Ministers in the Catalan Government were imprisoned , and one year on remain so and are awaiting trial.

Calvo argued that the nine political prisoners should be allowed to return home ahead of their trial, saying “it makes no sense that the precautionary imprisonment stretches on.”

On Tuesday [9 October] the Catalan Parliament lost its pro-independence majority after former Catalan President Carles Puigdemont and three other jailed MPs JxCat, the centre-right pro-independence party, refused to name substitutes after the court suspended them from the parliament, putting them at odds with the centre-left ERC.