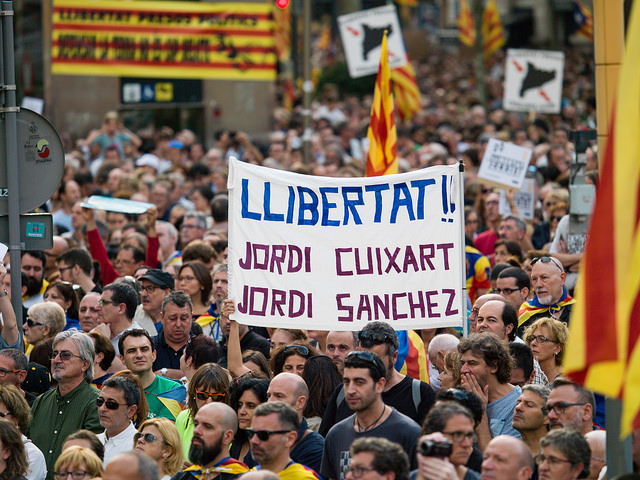 JORDI SANCHEZ, the imprisoned former leader of the Catalan National Assembly (ANC), has been denied permission by the Spanish Supreme Court to be temporarily freed in order to be sworn in as Catalan president.

Sànchez was named by former Catalan president Carles Puigdemont as his preferred successor after Puigdemont “provisionally” stepped down from the presidency while he remains in exile in Belgium.

Sànchez – who is currently imprisoned in pre-trial detention on charges of insurgency and embezzlement of state funds due to his involvement with Catalonia’s 2017 independence referendum – subsequently received the support of two key pro-independence parties in the Catalan parliament, including for Junts per Catalunya, for which he is an MP.

In February, Amnesty International called for Sànchez to be released, with Amnesty’s Europe director Gauri van Gulik stating: “The extension of Jordi Sànchez’s provisional custody constitutes an excessive and disproportionate restriction on his right to freedom of expression and peaceful assembly.”

On Wednesday 7 March, the Spanish Constitutional Court rejected a request from Sànchez’s defence team for the grassroots leader to be granted temporary liberty in order to attend the Catalan parliament for an ‘investiture debate’, the procedure by which his candidacy for the presidency will be considered by Catalan MPs.

Following the Constitutional Court’s decision, the matter was taken to the Supreme Court, who issued a similar judgement on Friday 9 March, with the judge citing “risk of repeated offence” in his reasoning.

Nevertheless, the Catalan parliament is still expected to meet on 12 March for Sànchez’s investiture debate.

Despite being supported by both Junts per Catalunya and Esquerra Republicana, the anti-capitalist Popular Unity Candidacy (CUP), which has been instrumental in previous Catalan governments, opposed Sànchez’s bid for the presidency last week, due to their preference that Catalonia, which self-declared as a republic last October, be implemented as an independent nation in the present parliamentary term.

The possibility now remains that the Catalan parliament will proceed with the investiture debate despite the opposition of the Spanish Government and Sànchez not being present. However, the session could be postponed, as it was on 30 January.