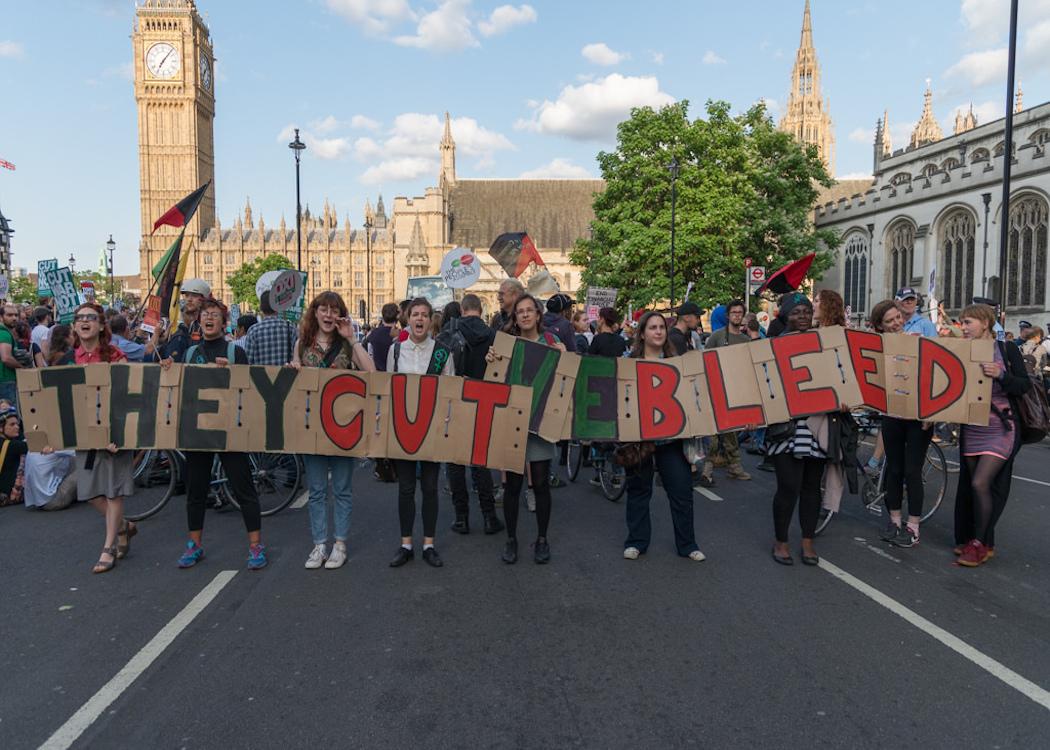 PS12bn in welfare cuts to bite later in parliament, while Scotland’s budget is reduced again

“A DECADE of austerity” will undermine public services and the economy across the UK, according to opposition parties reacting to the spending review announcement by Chancellor George Osborne MP.

Tory plans to reduce the state to 36.5 per cent of the economy – the lowest level since the 1940s – will continue despite protestations that the cuts will undermine the performance of the UK and permanently disfigure social cohesion through to the damage caused to key government departments.

The overall economic strategy presented by Osborne to the House of Commons today [Wednesday 25 November] remained largely in line with his previous plans to shrink services, especially for those on low earnings, housing support and in government economic development support.

However, Osborne was accused of carrying out key U-turns on tax credit cuts, police and military spending following pressure from opposition parties and Tory rebels.

SNP deputy leader Stewart Hosie criticised the five-year plan for including “PS40bn more than he needs to” in government cuts. He warned that “a decade of austerity” would intensify inequality, and undermine economic performance in productivity, national exports and tax collection.

He criticised cuts to the business department, UK trade and investment and the closure of HM Revenue and Customs (HMRC) offices.

Describing the review as a “shambles”, Hosie claimed the plans represented a bad deal for Scotland and asked whether money had been allocated for any military bombing then reconstruction action in Syria.

The details of the spending review confirmed that Scotland’s budget will be reduced by a further five per cent over the parliament, following a previous 10 per cent cut between 2010 and 2015.

Labour shadow chancellor John McDonnell criticised the Tory strategy for failing to meet its own deficit reduction plans: “Instead of taking five years to eliminate the deficit as he promised its going to take 10.”

McDonnell added that 85 per cent of tax and social security changes have hit women, disabled people have been hit 18 times harder by cuts and 4.1 million children now live in “absolute poverty”, according to research.

In a moment of pantomime, McDonnell quoted from chairman Mao’s ‘Little Red Book’ in homage to Osborne’s alliance with the people’s republic of China, which will gain a large investment stake in English nuclear power stations.

– Tax credit cuts have been revised. They will now happen later as part of the Universal Credit system from 2020. Cuts in access to tax credits will go ahead.

– Deeper cuts to Landlord Subsidy (Housing Benefit) will be introduced, including a cap on social housing support and a block on payments for anyone who leaves the UK for one month.

– Financial modelling adjustments mean Osborne claims to have billions in extra revenue (PS3.3bn from VAT changes and PS2.8bn from National Insurance over the parliament).

– The new direction on tax credit changes presses the restart button on how the Scottish Parliament could use future tax and welfare powers to alleviate austerity.

John Wilson, Independent MSP and Scottish Green Party spokesperson for fair work, said: “Today we see George Osborne continue down the road of attacking working people and vulnerable groups in society with punitive cuts to public spending. Austerity has already failed, by the chancellor’s own measures, and yet he continues to use it to attack those least able in society to deal with such cuts.”