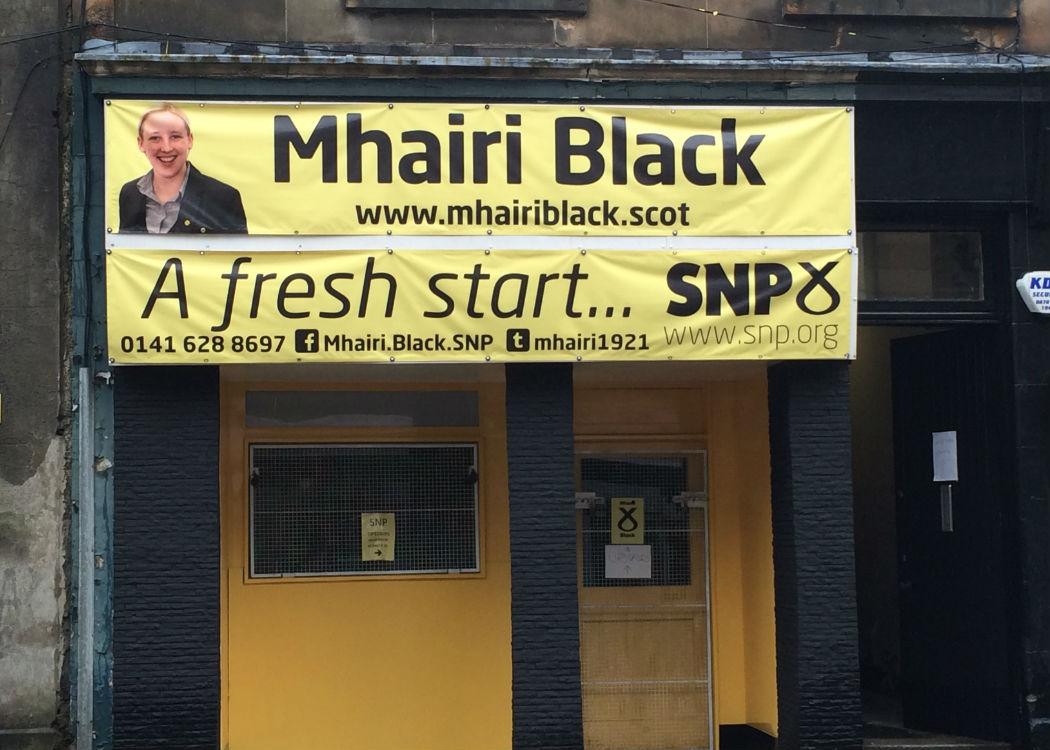 POLITICS can be a game of high stakes. Perhaps to no one is this fact more acute right now than Douglas Alexander. In just over a week’s time he could either be Britain’s foreign secretary, or he could be looking for another job.

If current polls are anything to go by, the latter is more likely.

Alexander won his Paisley and Renfrewshire South seat by a majority of 16,614 at the last election, but Lord Ashcroft’s polls now show that he is trailing the SNP’s Mhairi Black by 11 points.

The battle of Paisley highlights the transformation that is taking place across Scotland. Alexander, ever the experienced and professional politician, is in real danger of being unseated by 20-year-old Black, a university student who shot to prominence during the independence referendum.

“I’ve been involved in nothing at all before. I’m one of the lot that got fired up after the referendum and said no, we need to stand up and be counted here.” Margaret Johnstone

What Black may lack in experience, she makes up for in enthusiasm and passion and the evidence is that she is a capable communicator too. But can she really become the youngest MP since 1667?

The mood at her spacious campaign HQ is lively and upbeat. Volunteers fill every room; sorting letters, phoning constituents, and organising the day’s canvassing activities.

Margaret Johnstone is one of the volunteers. She is a 68-year-old former Labour voter and this is her first political campaign.

“I’m very new to this,” she tells me. “This is only my first week. I’ve been involved in nothing at all before. I’m one of the lot that got fired up after the referendum and said no, we need to stand up and be counted here. That’s what I’m doing.”

In a different room at Black’s campaign office, another volunteer has an almost identical story.

“I’ve never been involved, never been a member of the SNP and never even voted SNP before. I always voted Labour,” says Maria Reynolds.

“But what went on at the referendum made me so angry and I’m still angry. You want change, you have to get up and make it happen.”

In Scotland just now, a similar sentiment can be found up and down the country. Membership of the SNP has quadrupled post-referendum and now stands at well over 100,000. A recent poll predicted that the party could win every seat in Scotland on the 7 May election.

Across the other side of Paisley, Alexander’s campaign hopes to halt the SNP tide. The buzz that can be felt at Black’s HQ is absent here but they remain determined.

“Douglas is an incredibly popular MP, incredibly well known, that is worth thousands of votes.” Evan Williams

The man running Alexander’s campaign in Paisley is Evan Williams. He shares a name with a former Celtic goalkeeper, but may well have his work cut out if he is to stop the SNP scoring a famous victory here.

“The reality is that in every election the national mood is the thing that makes the biggest difference to what the result is,” he acknowledges. “But locally there is still something you can do and we’re doing everything we can to make sure we don’t get caught up in it.

“Douglas is an incredibly popular MP, incredibly well known, that is worth thousands of votes.”

The tension between the two camps seems to be heating up. SNP activists have accused the Labour team of bussing campaigners up from England to help Alexander’s effort.

This is nonsense, says Williams, but he does admit, “if their was a bus load of volunteers to be had, we’d happily take them”.

Williams adds that he spends every morning removing “Red Tories Out” stickers from the office windows.

Meanwhile a stack of suggestion notes have arrived back from voters. Around half of them, presumably none-too-kind to Labour, are ripped up and thrown in the bin.

Labour politicians and activists, in Paisley and elsewhere in Scotland, are desperately trying to keep their heads above water. Many party activists feel the mood is unfair to them and that the debate has become vitriolic and irrational in quarters.

They may think that and they may say that, but the evidence suggests Scotland just isn’t listening to them at the moment.

On the bus back to Glasgow, I meet Muhid Shahid, a 20 year old, who will be taking part in his first General Election.

“I don’t think the SNP is only about independence, I think it’s about making Scotland a stronger nation. The SNP makes sure Scotland gets what it deserves and will make Scotland’s voice heard.” Muhid Shahid

He voted No in last September’s referendum but he will be ticking the box next to the SNP next Thursday because he feels Westminster parties broke their promise of more powers for Scotland.

“When Scotland voted No, there were promises made about powers but that was a definite lie and it never happened,” he says.

“Politicians at Westminster were lying to keep as much power to themselves as possible.

“I don’t think the SNP is only about independence, I think it’s about making Scotland a stronger nation. The SNP makes sure Scotland gets what it deserves and will make Scotland’s voice heard.”

The sense of hurt and anger from Paisley’s population is palpable.

If Douglas Alexander – the shadow foreign secretary, no less – escapes feeling the wrath of that anger on 7 May, you suspect he will do so by the skin of his teeth.