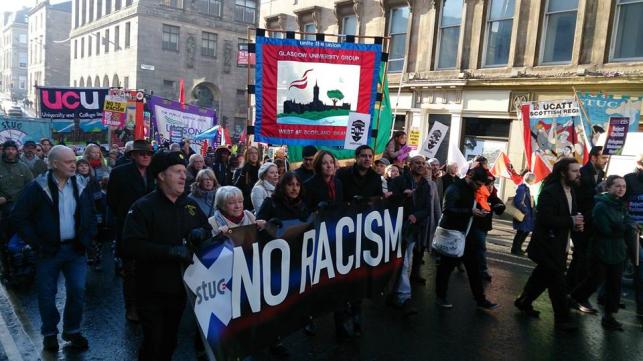 The event, assembling at Glasgow Green, will see trade unionists, community and religious groups, and activists march through Glasgow in an effort to “denounce racism and promote equality, fairness, and justice for all citizens”.

Suki Sangha said in advance of the march: “Every year we take to the streets to celebrate the positive contribution that people from across the world make to Scotland.

“The act of marching in solidarity, on our streets, is symbolic of the confidence that we want to give anyone who is experiencing racism. Our message is simple – you’re not alone.”

Sangha explained that the march was particularly pertinent in light of “the growth of the type of politics that seeks to divide us”.

“Everyday racism is on the increase in our workplaces and in our communities,” she said. “The Grenfell fire this year cruelly signifies how racism manifests institutionally in Britain and how it denies opportunity and basic human rights to people of colour”.

STUC general secretary Grahame Smith said the event was an attempt to highlight some of the issues which trade unionists and anti-racist campaigners have a duty to confront in the workplace, the welfare system, and across Scotland.

“It has never been more important for us to defend rights, protect communities and expose racism.” STUC general secretary Grahame Smith

Smith said: “Donald Trump, the Brexit vote and rising inequality have soured the political mood in the last year. Economic hardship continues to be blamed on migration, as those who channel hatred along lines of race and ethnicity continue to target the workers we represent through the STUC Black Workers’ Committee.

“Many migrant workers face appalling conditions of work, often without any oversight or regulation. This is particularly acute for migrant women.

“Trade unions must develop the structures to support and strengthen people working in exploitative conditions. And much more must be done to make Scotland a home for refugees and migrant workers who are still denied safety and security.

“It has never been more important for us to defend rights, protect communities and expose racism. We urge you to join us on Saturday to show that racism, discrimination and prejudice has no place in Scotland.”

The march will leave at 11am on Saturday and the rally at Adelaide’s will begin at 12 noon.