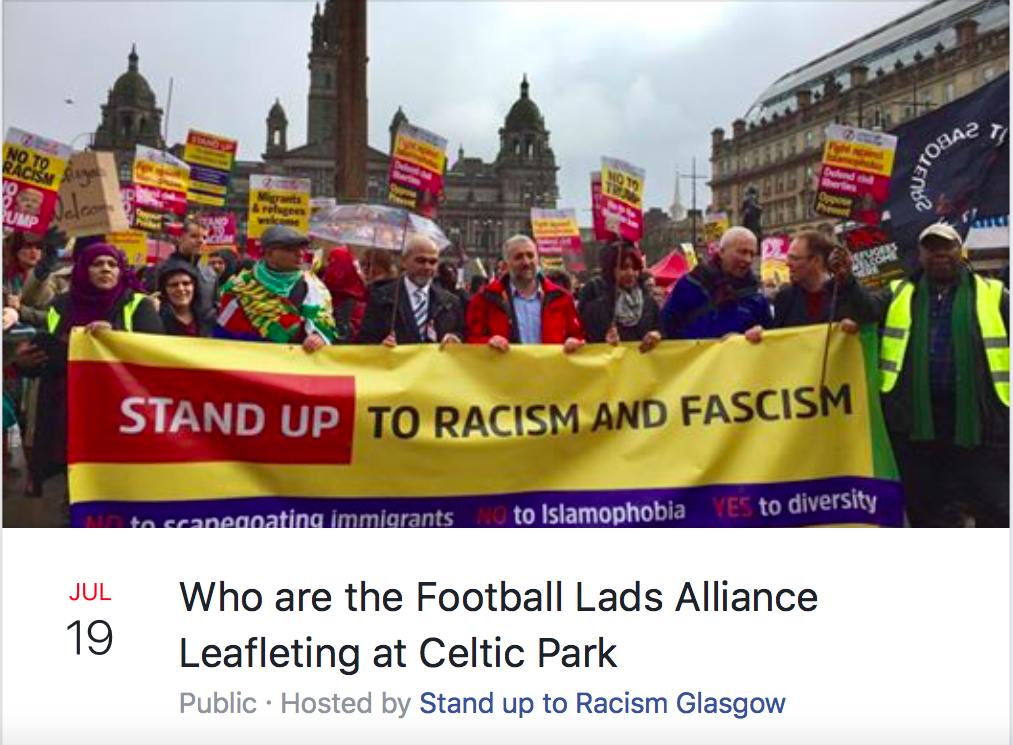 Anti-Racism campaigners will be at the Gallowgate, close to Celtic Park

STAND UP TO RACISM (SUTR) will be handing out leaflets at Celtic Park tonight to highlight what it calls a “worrying development” in the rise of an organisation called Football Lads Alliance (FLA).

Fronted by London property developer John Meighan, FLA has been gathering momentum in England where it recently held large-scale demonstrations against what it views as Islamic extremism.

The group has links to former English Defence League leader Tommy Robinson, real name Stephen Yaxley-Lennon, who led and promoted a demo called UK Against Hate in Manchester on 11 June.

Furthermore, founder of Mothers Against Radical Islam and Sharia (MARIAS) Toni Bugle was in attendance at the FLA demonstration on 24 June where she gave a speech to a large, predominantly white male crowd.

During her speech, she said: “Not one more man, woman or child will be sacrificed at the altar of political correctness,” after declaring the pride she has in her country and how she feels let down by the government.

Claiming to be a group of disgruntled football fans from clubs across England, FLA is said to appeal to their demonstrators not to bring flags of any type and refrain from consuming alcohol to present a clean image and distance itself from hard-line groups like the EDL and Britain First.

Both demos in England are said to have passed peacefully and attracted large numbers who support the FLA.

But groups oposed to the FLA believe there are similarities in how groups like the English Defence League and Britain First were initially formed, claiming comparable intentions, but quickly decending into a front for far-right extremists. Furtermore, groups like the BNP and the National Front are known to have targeted groups of football fans with a view to push a more hard-line view on slightly more sympathetic members.

The leaflet will say: “Following the racist abuse Scott Sinclair recently suffered, Stand up to Racism is highlighting the worrying development of the Football Lads Alliance (FLA) who on 24 June organised a ‘United Against Extremism’ march. Thousands of supporters from many clubs converged on London Bridge, scene of one of a series of horrendous terror attacks in Manchester and London over recent months. The FLA have announced that they will march again on 7 October.”

CommonSpace contacted all individuals and groups connected with this article but had not received a response by time of publication, other than from MARIAS, which confirmed it spoke at the event held in London.

Celtic will play Linfield tonight in the second leg of their second qualifying round.