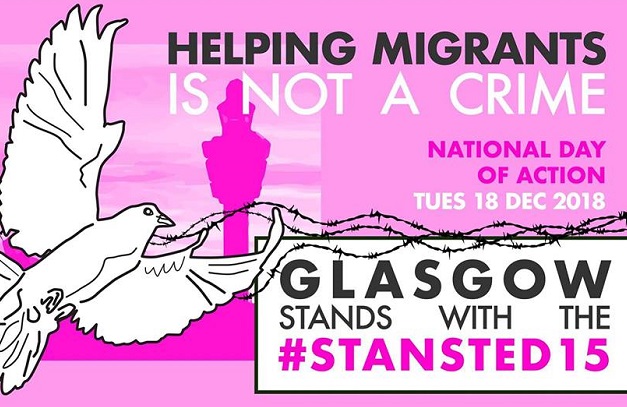 REFUGEE rights activists will protest in Glasgow on Tuesday evening [18 December] in solidarity with the Stansted 15, as part of a UK-wide mobilisation to mark International Migrants Day.

On 28 March 2017, 15 refugee rights protestors chained themselves together in front of a deportation flight at London Stansted airport, causing the flight – which contained 60 vulnerable migrants from Ghana, Nigeria and Sierra Leone – to be cancelled.

On Monday last week [10 December] the judge at Chelmsford Crown Court found the 15 guilty of ‘terrorism offences’. They face sentencing in February 2019 for endangering the safety of an airport, an offence which could see them serve life imprisonment.

The protest has been co-organised by Unity Centre, Universities Resist Border Controls and Ubuntu Women Shelter, and will take place at Buchanan Street steps from 6pm.

A joint statement on the Facebook event for the demonstration reads: “We believe that this draconian ruling was designed to thwart direct action against the UK Government’s brutal and violent treatment of migrants.

“This country’s racist and xenophobic immigration policy is rooted in its colonial history. This history continues with the mistreatment and exploitation of migrants in detention, a regime of sexual and physical violence that has resulted in over 43 migrant deaths inside ten immigration removal centres since 2000.

“Even when not detained, borders cross the everyday lives of all migrants, especially asylum seekers who live in enforced poverty, forbidden to work and housed in appalling privately-run accommodation.

“State hostility is further embedded in schools, universities, the NHS, charities and housing authorities, with employees conscripted to become border guards, making precarious the lives of so many non-EU and EU migrants and those who were born in the UK but were unable to regularise their status because of opaque immigration rules and high visa fees.

READ MORE: ‘The human cost of this is impossible to describe’: Kweku Adoboli speaks out after deportation

“The violent coloniality of the hostile environment was exposed this year by the horrible treatment of the Windrush generation, many of whom were brought to the UK to help rebuild the national economy after World War II, raising children that were born in the UK. After living in the UK for their entire lifetimes, members of these communities have found themselves cruelly detained and deported, without the ability to contest their cases.

“On Tuesday 18 December, we will use our collective voices to stand in solidarity with the Stansted 15 and with all migrants, such as the women detainees in Yarl’s Wood who continue to #HungerForFreedom.

“To support the Stansted 15 and End Deportations, we urge people to wear and/or make signs in pink in solidarity.”

The judge, Christopher Morgan, had told the jury to disregard all evidence from the defendants that stated they were trying to stop human rights abuses, and instead focus only on whether the safety of the airport was put in danger. The 15 are seeking to overturn the decision on appeal.

Amnesty International said the verdict was “a crushing blow for human rights in the UK”.

Responding to the verdict in a statement, the Stansted 15 said: “We are guilty of nothing more than intervening to prevent harm. The real crime is the government’s cowardly, inhumane and barely legal deportation flights and the unprecedented use of terror law to crack down on peaceful protest.

“We must challenge this shocking use of draconian legislation, and continue to demand an immediate end to these secretive deportation charter flights and a full independent public inquiry into the government’s ‘hostile environment’.

“Justice will not be done until we are exonerated and the Home Office is held to account for the danger it puts people in every single day.

“It endangers people in dawn raids on their homes, at detention centres and on these brutal flights. The system is out of control. It is unfair, unjust and unlawful and it must be stopped.”

Hundreds of people demonstrated outside the Home Office in London last week against the decision.

Also marking International Migrants Day, the migrant-led organisation Migrant Voice is celebrating the friendships made due to migration and encouraging people to post their own. You can get involved by posting a 30 second video with the hashtag #migrantfriend.