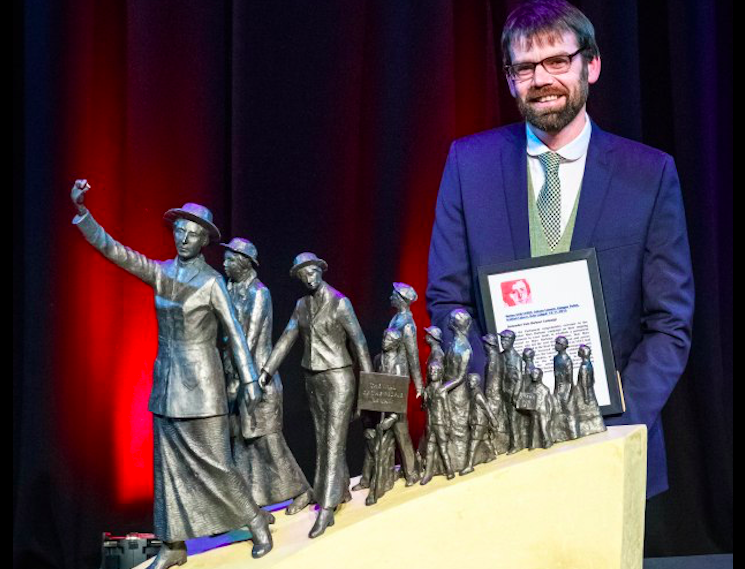 A STATUE honouring legendary figure Mary Barbour will be built in Govan where she campaigned for tenants’ rights.

The statue will be unveiled in Govan on 17 November.

Barbour was a leading campaigner during rent strikes in 1915 that led to a change in government legislation, prohibiting unscrupulous landlords from raising rents and evicting residents who couldn’t afford to pay.

“The day in November 1915, when she led a 20-thousand-strong protest through the streets of Glasgow to the Sheriff Court and won the victory.” RMBA

The Remember Mary Barbour Association (RMBA) has reached its fundraising target of £110,000 meaning the statue will be erected in the area where Barbour fought for better living conditions for Glasgow tenants.

Chair of the RMBA, Maria Fyfe, said: “This sculptor’s intention was to present Mary Barbour, for now and for generations to come, in a way that captures the achievement for which she is best known.

“The day in November 1915, when she led a 20-thousand-strong protest through the streets of Glasgow to the Sheriff Court and won the victory.”

Sculptor Andrew Brown has completed the effigy that replicates Barbour leading a march through the streets in November 1915.

Barbour decided to take that stance after thousands of people fled to Glasgow seeking work when World War I started in 1914.

“The Glasgow Women’s Housing Association took up this issue, and in the working-class districts, committees were formed, to resist these increases in rents.” Helen Crawfurd

This led to landlords believing they could raise rents for women left behind while their husbands were at war or being held in German prisoner of war camps, thinking they would be a soft touch.

But Barbour led a backlash against the landlords, as thousands of people were already angry about lack of maintenance and poor living conditions in tenements in Glasgow.

Barbour’s fellow campaigner Helen Crawfurd once said: “The Glasgow Women’s Housing Association took up this issue, and in the working-class districts, committees were formed, to resist these increases in rents.

“Cards, oblong in shape, were printed with the words ‘RENT STRIKE WE ARE NOT REMOVING.’ and placed in the windows of the houses where rent increases were demanded.”

Local children will take part in the ceremony alongside council officials.