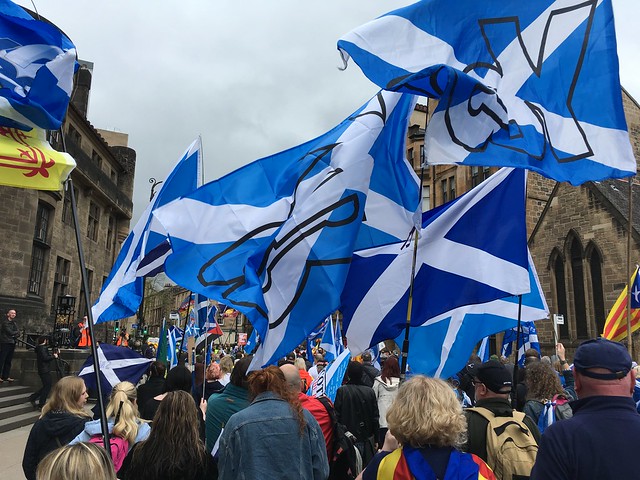 A COALITION of pro-independence groups from Tayport to Kincardine will assemble in the hopes of honing the political education of the independence movement later this month.

Fife Plus for Independence, a collaborative gathering of Yes groups across Fife formed in spring 2019 in the hopes of sharing best practice on pro-independence campaigning, will host a series of workshops on 21 September. Their aim is to empower participants to “have better conversations that move people from No to Yes.”

Indyref at 5: Contribute to our special week of coverage 16-20 September

Active campaigning efforts amongst the pro-independence movement have increased, following First Minister Nicola Sturgeon’s confirmation last week of her intent to secure the necessary transfer of powers for a second independence referendum to be held prior to the 2021 Holyrood elections.

This past weekend, thousands descended upon Perth for the latest All Under One Banner march, including Deputy First Minister John Swinney.

The Fife event will include ‘A vision for a new Scotland’ from Professor Kirstein Rummery, co-director of the Centre on Gender and Feminist Studies at the University of Stirling; ‘Big enough, rich enough, smart enough’, from the comedian Hardeep Singh Kohli; ‘How to set up an independent country’, from Common Weal director of research and policy Dr Craig Dalzell, and ‘Our Time is Now: Independence, Climate Change and the Next Generation’, from Cailyn McMahon, deputy convenor of the equalities & human rights committee of the Scottish Youth Parliament.

“We need to step out of that bubble to engage people who are less sure and might be persuaded.” Jean Ferguson, Fife Plus for Independence

Speaking to CommonSpace, Fife Plus for Independence representative Jean Ferguson explained the importance of political education to the movement.

“Those converted to independence are strong as illustrated by the amazing marches,” Ferguson commented. “We need to step out of that bubble to engage people who are less sure and might be persuaded. That means listening, building relationships and having confidence in our information. The intent of this day is to increase those skills.”

Addressing what the independence movement’s next steps should be, Ferguson said: “Build relationships and listen to colleagues, friends and family to help move them to be supporters. Think creatively – for example, one of our workshops is on how to use arts and culture. Project quiet confidence. Share our visions for a better Scotland.”

Details of the event, which is open to people from beyond Fife as well, can be found at EventBrite.