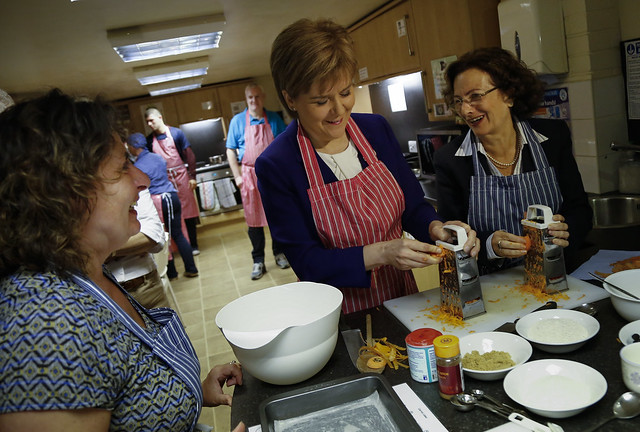 IN-WORK poverty is a hidden scourge on our society. Half of the low paid workers surveyed have reported skipping meals to pay essential bills, with a third missing meals on a regular basis.

Figures released by USDAW, a trade union representing food manufacturing workers and major retailers, also indicate nearly one in ten low paid workers use food banks to feed themselves and their families.

That means people stacking shelves may well be the recipients of the tin of beans just dropped in donation bins a few feet from them.

The stark reality facing hundreds of thousands of Scots was further exposed in a report recently published by Independent Food Aid Network and A Menu for Change. Their findings revealed an alarming picture of foodbank use in Scotland. An estimated total of half a million emergency food parcels were distributed across Scotland between April 2017 – September 2018, nearly double the number previously thought.

A nation where all food is good food, and food production is fair to people, animals and the planet. A nation where everyone is more informed and empowered to have a voice in our food system. A nation where food is at the heart of healthy lives and there is universal access to high quality, nutritious and sustainable food.

These are the ambitious, but achievable , aspirations of the Scottish Food Coalition, a civil society coalition with over thirty members from across the food system. Although the members have different areas of focus, the Coalition recognises that food insecurity, climate change, public health, biodiversity, workers’ rights, animal welfare, access to land and waste are all interrelated and urgent. The Coalition is working for a fundamental transformation of Scotland’s food system, by recognising the links between these issues, solutions that deliver system-wide progress can be found.

The Coalition believes that legislation has a crucial role to play in setting up a fair, healthy and sustainable food system. This legislation, the Good Food Nation Bill, can catalyse a transformation in how our food system works by establishing the core purpose of the food system in law, and establishing governance that ensures accountability and progress.

Opposition parties showed their support for new, transformative legislation on the food system this past September. They passed a motion that called on the Scottish Government to bring forward the bill. Following this debate, the long-awaited consultation on a Good Food Nation Bill was published just before Christmas. While the consultation is complex, confusing and constraining, it does have significant proposals.

READ MORE: Mike Downham: We should learn from the #ClimateStrike in our approach to food activism

The consultation holds a commitment to the right to food: “The Good Food Nation framework will focus on embedding processes for ensuring that the substance of the right to food has effect as a matter of everyday practice.”

While the right to food does not end food banks overnight – it sets Scotland on a rights-based policy approach to make sure that everyone has reliable access to healthy, sustainable food for themselves and their family. Government support for this is very welcome – but does not go far enough. The right to food needs to be enshrined in Scots law so that unequivocal obligations are placed on decision-makers to protect and progress Scotland’s food system for the benefit of all the people who live here.

Proposals also stipulate that the Government and public authorities will take a joined-up approach to addressing diverse policy areas related to food. Scottish Ministers and public authorities will be required to “set out a statement of policy on food” every five years. In other words, they will have to publish their cross-cutting plan for how they will deliver progress. The plan will cover “food production and consumption issues”, “access to affordable, local, nutritious and culturally appropriate food, and food in the public sector”. The Coalition welcomes these ideas, but how will the Government be held to account if its plans and progress reports are unsatisfactory?

The Government further asserts that they “do not see value in establishing an independent statutory body for the purpose of overseeing the Good Food Nation policy. Scottish Ministers have a presumption against the establishment of new statutory bodies in all but exceptional cases.”

Half a million emergency food parcels delivered in 18 months and one in ten low paid workers forced to visit food banks – it is a damning inditement of the current state of affairs if this is not considered exceptional.

The Coalition strongly believe that, given the complicated nature of the food system and the huge challenges facing it, there needs to be an independent body with statutory power to ensure meaningful progress towards achieving the Good Food Nation vision. This body would provide expertise on realising the right to food, scrutinise relevant policies, report on the state of the food system and ensure coherence across Government. It will drive forward meaningful change, and ensure the momentum for a fairer, healthier and more sustainable food system does not dwindle.

Without ambitious policy-making the appalling level of in-work poverty and food insecurity will become the norm.  This is not a future we want to see for Scotland, it’s up to Government and Parliament to make sure it isn’t.

Learn more about how you can participate in the Good Food Nation consultation, visit by 18 April.