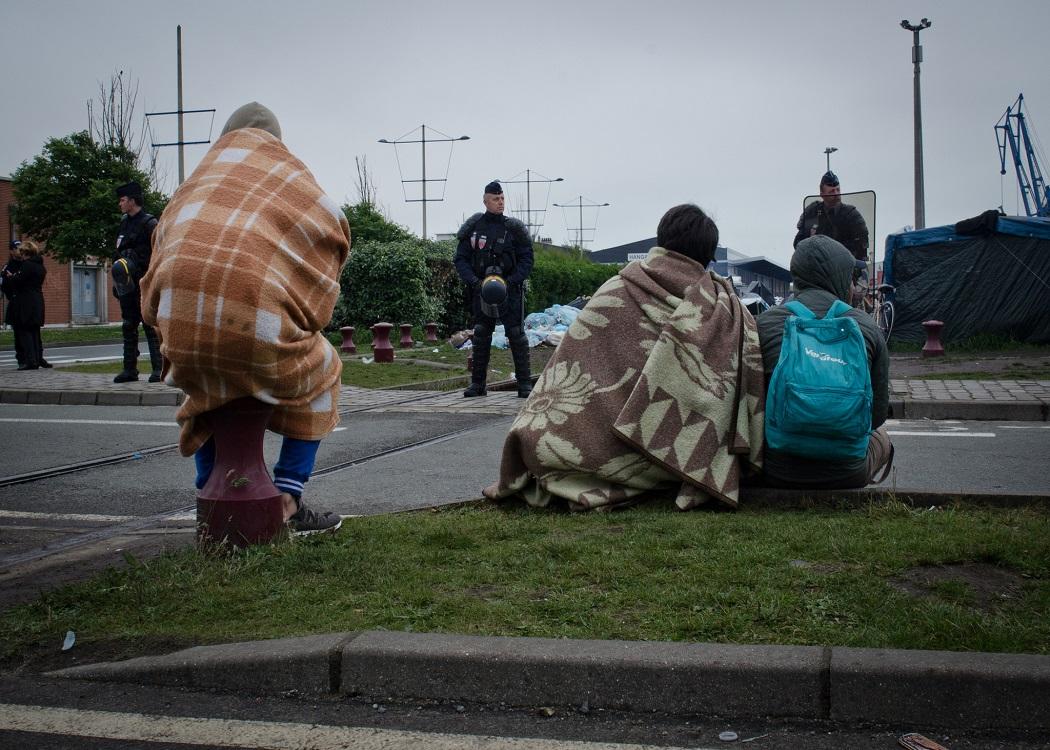 LET’S start by making one thing clear: the ‘Calais migrant crisis’ in its full, hyperbolic technicolor is nothing more than a lesson in counter subversion from the establishment.

If you are of the opinion that the army needs to be deployed to protect our borders from a handful of emaciated, desperate humans (the number of which wouldn’t fill a local theatre), then feel free to hold your nose while reading this – unless I missed the footage of them dressed in camo-gear, carrying automatic weapons.

On Thursday, ‘Prime Minister’ (I use this job description in the loosest sense of the phrase) David Cameron made this statement, from Vietnam: “This is very testing, I accept that, because you have got a swarm of people coming across the Mediterranean seeking a better life, wanting to come to Britain because Britain has got jobs, it’s got a growing economy, it’s an incredible place to live.

“But we need to protect our borders by working hand in glove with our neighbours, the French, and that is exactly what we are doing.”

Aside from the blatant exaggeration about a “growing economy” – Cameron assumed we all missed the ONS data release on GDP, which showed a meagre 0.7 per cent growth, the majority of which came from the personal debt-fuelled service sector, the financial services industry and mining – the dross about jobs and the debatable assertion the UK is “incredible” to reside in, and the terminology “swarm”, was met with a ferocious backlash from many shades of the ‘left’.

The Refugee Council described it as “awful, dehumanising language from a world leader”, while Andy Burnham tweeted that the PM’s use of the word swarm was “nothing short of disgraceful. Confirms there’s no dog-whistle these Bullingdon Boys won’t blow”.

But sadly this counter-attack didn’t seem to resonate with everyone – you only have to browse the Twitter thread for #Calais to realise this, however much Jeremy Corbyn’s campaign team shrill that he’s captured the hearts and minds of the country.

Phrases like “shoot them all”, “blow up the tunnel” and “send ’em home” are littered like incontinent rabbit droppings across the internet, and the very fact that Cameron feels comfortable likening possible refugees to “a large or dense group of flying insects” is telling of where public opinion is.

On the same day, The Economist published survey data showing immigration is still the biggest concern among the public.

Those in the left are, sadly, missing numerous tricks with the argument for immigration – all of which are right under their noses, if they could take the time to stop gazing at their navels and just bleating “NHS Workers!” and “migrants do contribute, you know!”.

9.5 per cent of the UK is classed as ‘urban’, i.e. it has a population of more than 10,000 people, and this land also includes parks, gardens, playing fields, allotments etc.

Around 40 per cent is then farmland, and the rest is made up of different categorisations of ecosystems (woodland, moorland etc). We won’t talk about house building hitting its lowest level since 1923 or the 870,000 empty homes in the UK, either.

“But we don’t want to build on OUR countryside!”

The UK covers 60 million acres, and a third of this is owned by a group of 36,000 people – or 0.6 per cent of the population. Moreover, 50 per cent of rural land is privately owned by the same people – most notably the Duke of Buccleuch and Queensbury, whose four estates cover 240,000 acres, making him the largest private landowner in Europe.

A pertinent example is “our” national parks – even after the ‘right to roam’ act came into force in 2005, we, the public, still legally only have access to 55 per cent of them. So if you think this green and pleasant land is “ours” – you are sorely mistaken.

No, “we” can’t – but the people creaming off us certainly can.

The national balance sheet is quietly published every year by the government, and shows the breakdown of how much the UK is actually worth.

2013 figures revealed that the net worth of the country increased to PS7.6 trillion; this was mostly because the banks, hedge funds, pension companies etc. – or the ‘financial services industry’ – had increased its wealth by 373 per cent in a year.

Contrast that with the wealth of non-financial institutions (translated – every other company), which was minus PS1.1bn, and the government (you and I), which was minus a whopping PS158bn, and you wonder who, exactly, suffered a financial breakdown in 2008 – we’re up to our eyeballs in debt, to the people WE lent money to.

“But they come here scrounging benefits!”

Work-shy, immigrants are not.

The latest migration statistics show that 75 per cent of people arriving in this country are here for work or study. What’s more, while around 15 per cent of UK-born nationals claim some form of employment benefits, this figure is only six per cent for non-UK born people.

“But they’re taking our jobs!”

In March, the government quietly published (see a theme with how they release awkward information here?) a report which stated that by 2022, the size of the UK population aged 16-50 would be down 700,000 on 2014 figures.

The thrust of the report was talking about how the government can get us all working longer, as we (as a country) will need to make up the shortfall in younger workers.

Couple this with the state pension age rising to 66 by 2020 along with talk from the government’s former pension adviser-in-chief of it being 70 by 2040 , and the term ‘work ’til you drop’ takes on a whole new meaning.

Oh, and if you think it’s us, the workers, who benefit from a higher age of retirement – think again.

It’s the companies. On average, it costs PS30,000 to hire a new employee – while the average funeral of a spent worker is a mere PS3,600.

“But they don’t integrate with British culture and society!”

The basis for the argument against immigration that is being peddled by the establishment is a very simple one – greed.

It is in the interests of the rich and powerful in this country to limit the in-flow of people, as ultimately it makes them wealthier. While the original zeal for immigration was an intentional mechanism to drive down wages and temper the power of trade unions, this is now the end game.

Less people, producing the same output in a country is a win-win for those in power. They get to sit on more of their land indefinitely; they get to reduce the amount of public spending on services; they get to increase their profits, and they, ultimately, keep on getting richer.

Of course, the reality of the terrible situation in Calais, and the ensuing exploitation of it by the establishment is that there are other people, suffering.

But years of ‘race-to-the-bottom’, faux-aspirational conditioning of the population means many of us seem more concerned with the fate of a lion, than that of fellow human beings.

The left needs to take stock, and re-assess how it plans on countering the nefarious hyperbole that surrounds the immigration debate, because the unfolding humanitarian crisis in Calais and the public’s reaction to it, shows that what we’ve done in the past simply isn’t working.