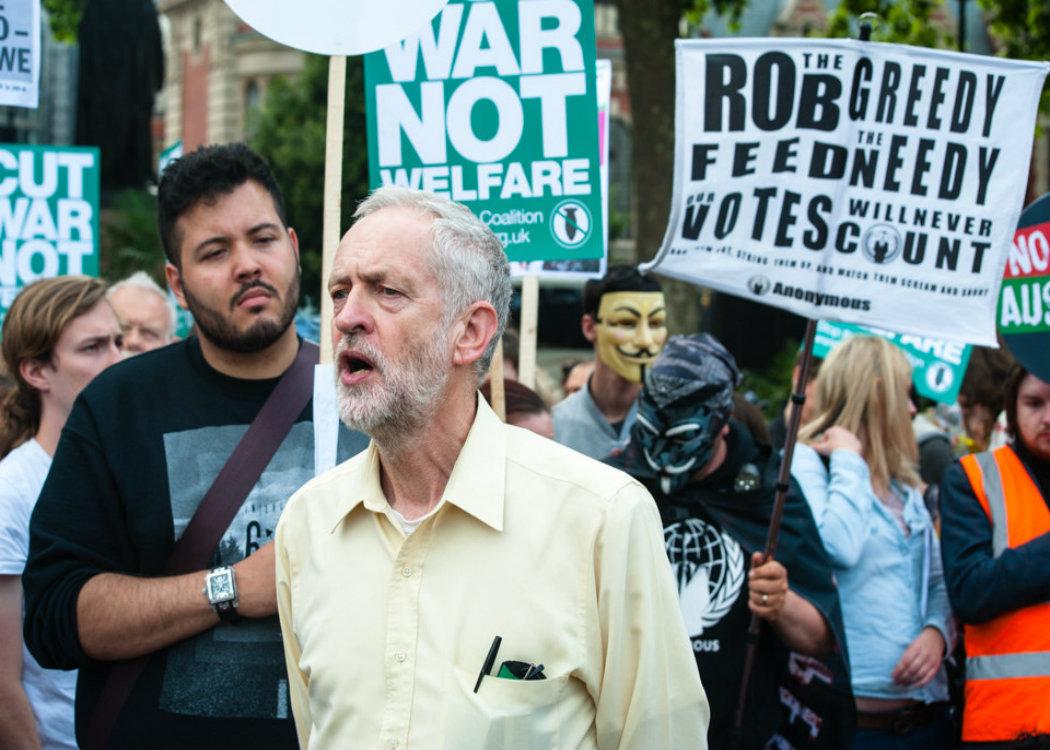 Steve Topple writes about the chaos following Jeremy Corbyn’s victory, and whether the views of the mainstream media reflect society

Did you hear it?

Barely recognisable above the nasal squawking of Murnaghan and the nervous squeals of Marr, but it was definitely there.

The sound of cold steel hitting the sodden earth, as a plethora of middle-Englanders resurrected their 60’s fallout shelters in preparation for the Armageddon that will ensue after the Corbyn “Serious Risk to National Security” victory (or so say the Conservatives Campaign HQ ).

To compliment this stark warning, the rabidly swivel-eyed commentariat’s dross-peddling, from the four corners of the media circus tent began – all frantically juggling the Conservative’s balls to the sound of Orff’s “O Fortuna” while the doors rapidly fell off the old banger they came pouring out of.

“Meanwhile, the part-time clowns at The Observer also jumped on the comedy fire engine to hose firebrand Corbyn down”

First to throw political custard pie was perpetual source of hilarity Dan Hodges. Writing in the Telegraph , Hodges yelped it was “the day the Labour Party died”, calling it a “catastrophe for the country”, and saying even Corbyn’s supporters deem him “unelectable”.

Hodges, in his usual convenient way, ignored a mountain of polling before the General Election which indicated the majority of the public support the fundamentals of Corbyn’s politics – robust public services, a preserved NHS and a fair society. His own admission that Labour needs to admit its perceived economic failings of the past is now flying in the face of even the House of Commons Library’s evidence , and Corbyn’s steadfast proclamation that the “Bankers Did It” is one that has resounded across Europe.

He also fails to grasp the possibility that the public may not want another corporate drone, wearing a suit that looks at home in a Corney and Barrow wine bar and pontificating about “predistribution”, “aspiration” and “hard-workers” – we may actually like the idea of someone reminiscent of a geography teacher leading the country.

“But does the opinion of the clowns from the media circus really matter anymore? If Corbyn is to be believed, then no – the editorial rooms at mainstream media are “cut off” from what the public really think.”

Tim Stanley, Hugh Grant-esque fop and nemesis to fellow “historian-cum-hack” Owen Jones, went even further in the Telegraph , verging on the deranged lunacy of Stephen King’s “It”:

“Gone all Khmer Rouge”? If Jeremy Corbyn is Pol Pot, then TUSC’s Dave Nellist must surely be Abimael Guzman Reynoso.

Over in Auntie’s circus tent, BBC capitulator-in-chief Andrew Marr gave Michael Gove a grilling in only the way he could – seared on both sides with the juices still flowing.

Marr: “There is a much angrier, raw tone coming into the political debate, particularly around austerity. Do you agree with that sort of threat?”

Gove: “There is a danger. There are… some people behind him, who do have a traditional in politics which is very different from Corbyn’s… and I do worry, with organisations like UK Uncut, who want to bring protest onto the streets. If you have a strong alternative prime minister… people are less inclined to take their anger onto the streets… There is a danger to our democracy overall, that Labour has not chosen someone who will be their strongest prime minister”.

Marr: “Let me ask you about Syria”.

The stunning extent of the sycophancy by Marr is nothing unusual, but the semantics used by both him, and Gove, are hyperbolic in the extreme. Talk of “threats”, “dangers”, the notion UK Uncut are somehow militant – the essence of the message is that a democratic vote in a democratic party is now a threat to our democracy, and that we should (as always) just do as we are told, and be servilely grateful for whatever is thrown our way.

Meanwhile, the part-time clowns at The Observer also jumped on the comedy fire engine to hose firebrand Corbyn down – this time basically inventing whatever they deemed necessary to back up their argument that Corbyn is unelectable.

“Whether his… unfunded spending commitments such as scrapping student fees (not unfunded – here ); Corbynism’s defining principles are an unflinching belief in an expansionary role for the state (he believes in Co-operatives, not Statism – here , here and here ) and an isolationist international policy (Social Democratic, not isolationist – here and here ) that avoids consideration of what many consider Britain’s global responsibilities”.

They go on to whine “There is much evidence to suggest voters will resoundingly reject Corbynism in its current form if he makes it to the next election” (without providing any evidence), and that “New polling published by Lord Ashcroft last week reinforces… voters deserted Labour… because they had serious doubts about Ed Miliband and they feared a Labour government would spend and borrow too much”. I wasn’t aware Ed Miliband had won the Labour Leadership contest, or that Corbyn had pledged to increase borrowing.

“A ‘Boots on the Ground’ operation is the only way that the vitriolic capitulation to the Establishment by our media can be countered – and believing that the influence of this circus has been diminished is utterly foolish.”

Finally, Ringmaster Murdoch’s attack dog The Sun went into full knife-throwing routine , screeching that “Marxist throwback” (Marxist? Social Democrat) Corbyn was singing the “Red Flag”, while “Union Bruiser” Watson and “Union Baron” McCluskey looked on, and called him a “Serial Rebel”, comparing the new leader and his deputy to “Tom and Jerry” and quoting unnamed sources using various negative expletives about the future of Labour.

But does the opinion of the clowns from the media circus really matter anymore?

If Corbyn is to be believed, then no – the editorial rooms at mainstream media are “cut off” from what the public really think. Speaking to Huffington Post, he asserted :

“The majority of people don’t buy a newspaper, they read bits on line and self-inform online and so we have to reach out in a different way. And our campaign has been very much social media orientated. My personal Twitter account now has 104,000 followers, our Facebook is 124,000 likes. So those kinds of numbers are enormous and of course the re-tweeting and re-sending makes it massive.”

I’m going to don a red nose and paint my face, here – because this kind of whimsical platitude to the power of social media is dangerous, and a threat to the “Left” in general.

Analysis shows that the majority of the public still get their news from television, and while the use of the internet for this has grown most people still use just 2 sources to get information. Overall, people just use three sources to get their news across all platforms, and the BBC still has the predominant share (43%), with Sky coming in 2 nd (15%). Just 5% of people say they use social media as a source of news.

Sadly, editorial rooms are not “cut off” from what the public think – they decide what we think, as has always been the case. Yes, Corbyn’s campaign was a remarkable display of grassroots activism, social media mobilisation and people telling an Establishment organisation to “get stuffed”.

This is not yet some turning point in British politics (the SNP wipe-out of Labour in May was, arguably, more stunning); this is a tentative baby step in the right direction, and while the echo-chamber may have become slightly more vacuous, it appears we are still stuck in it.

A “Boots on the Ground” operation is the only way that the vitriolic capitulation to the Establishment by our media can be countered – and believing that the influence of this circus has been diminished is utterly foolish.

Because however much we kid ourselves that “Mainstream Media” doesn’t matter – it does.

“Send in the Clowns”? They truly are already here.

We now need to ensure it’s not us with egg-custard pie on our faces.