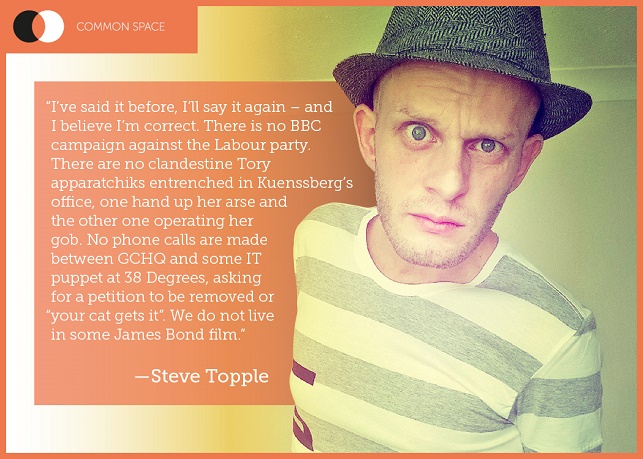 "MANY journalists now are no more than echoers of what George Orwell called the 'official truth'. They simply cipher and transmit lies. It really grieves me that so many of my fellow journalists can be so manipulated that they become what the French describe as 'functionaires' – functionaries, not journalists. Many become very defensive when you suggest to them that they are anything butimpartial and objective. The problem with those words 'impartiality' and 'objectivity' is that they have lost their dictionary meaning. They've been taken over… [they] now mean the establishment point of view."

John Pilger is probably one of my favourite journalists. He see’s things for what they really are, without the need for elaborate conspiracy theories or an inherent bias to underpin his thinking.

He is able to cut through all the fog that envelopes us in the modern world and get to a crisply glaring truth which hardly any other writer I know of can do. He also speaks in such a manner that doesn’t isolate people simply for not having swallowed the Oxford English Dictionary.

I like him a lot, and believe many of the emerging new breed of non-mainstream journalists could learn a lot from the man.

But currently these radical rookies (like myself) have a lot of other problems to contend with, not least the current media wars that are developing between those of the old, establishment guard and us who are, well – a bit 'out there'.

There are growing levels of anger among much of the left against the mainstream media and its portrayal of politics in the UK. The most profound example of this has been the fury directed at Laura Kuenssberg over her coverage of the local, Scottish and Welsh elections last week.

Accusations of being on a 'Corbyn-bashing hobby horse', of the coverage being a 'sustained attack on Jeremy Corbyn' and that Kuenssberg was a behaving like a 'Tory spin-doctor' were the more polite comments passed about the BBC's political editor.

This culminated in the now standard manner – a petition calling on Kuenssberg to be sacked, which garnered 35,000 signatures before it was unceremoniously dropped by the website 38 Degrees for alleged misogyny.

Cue yet more accusations of establishment interference, of bias by the moderators of the petition’s website, some sort of Machiavellian trinity between the BBC, the Tory government and 38 Degrees to ensure that this petition was killed off (while making Corbyn look bad in the process), and a second petition calling for the first one to be reinstated.

Can we buy Kool-Aid in the UK? Because if so, I think a few people have been gulping it down as opposed to sipping on it, of late.

I’ve said it before, I’ll say it again – and I believe I’m correct: there is no BBC campaign against the Labour party. There are no clandestine Tory apparatchiks entrenched in Kuenssberg’s office, one hand up her arse and the other one operating her gob. No phone calls are made between GCHQ and some IT puppet at 38 Degrees, asking for a petition to be removed or "your cat gets it". We do not live in some James Bond film.

Our established, corporate media is in terminal decline, however much they profess otherwise. In an age of Instagram and Twitter, where news breaks via these mediums before an office in Fleet Street has even blinked, they are constantly playing a game of catch up.

Granted, they may still have the edge when it comes to the length and breadth of their reach, but there is serious competition now from other outlets which can essentially do what they do at a fraction of the cost.

In the case of the BBC, accusations of bias to the left or the right are essentially unfounded. The organisation has one bias and that is to protecting its public funding, regardless of what government is in charge at the time of its royal charter renewal – you only have to juxtapose its coverage of the second Iraq and Afghan wars under a Labour government with the current Syria campaign under the present incumbents to realise this.

Furthermore, it is in no way in cahoots with the Tory government. Granted, many of its top broadcasters are renowned Conservatives, but its coverage of Labour in a less than favourable light is more to do with its servility to the current incumbents of Downing Street in the hope that it gets treated favourably in the new charter – which, by the looks of Thursday’s white paper, has succeeded.

If you were an executive on £100,000 plus a year with an excellent pension and expenses system and a swanky office in the heart of London, wouldn’t you lick a few chocolate starfishes to maintain the lifestyle to which you have become accustomed?

The problem runs deeper than this, though – to the very heart of journalists as human beings. As Pilger also said: "Journalists don't sit down and think, 'I'm now going to speak for the establishment'. Of course not. But they internalise a whole set of assumptions, and one of the most potent assumptions is that the world should be seen in terms of its usefulness to the West, not humanity."

Essentially what he is saying is that corporate media employees eventually start believing their own guff. I doubt that anyone at the BBC set out in their careers thinking, "Right! I want to work as a mainstream journalist so I can feed the population a diet of manufactured consent and counter-subversion!"

But that is what they end up doing. Through a mixture of initial cognitive dissonance beaten out of them via indoctrination which leads to a herd mentality characterised by unchallenged groupthink, they end up existing in a vacuum where I expect they fail to even see exactly what they are doing.

A prime example is an interview with Noam Chomsky by BBC journalist Andrew Marr. In it, Marr questions Chomsky as to how he can possibly know that the BBC standard-bearer is self-censoring.

"I’m sure you believe everything you say. But what I’m saying is, that if you believed something different you wouldn’t be sitting where you are sitting," Chomsky replied. If Marr had been holding a mic, it would have dropped.

Or, they could all be middle-class, Russell Group elitists who care not a jot for the lives of everyone else in the UK. I may be wrong.

But do the established, corporate media feel threatened by the growing band of new platforms? A case in point may well be the reaction to the criticism of the BBC’s election coverage from website The Canary. The media outlet, which has been established just over 10 months, came in for a barrage of insults over its coverage of the furore surrounding Kuenssberg and the local elections – and not from anyone at the BBC.

Private Eye ran an 'expose' of the media outlet, claiming it was "clunky" and "pisspoor (sic) Corbynist clickbait". The likes of Ian Dunt, editor of politics.co.uk, chipped in, calling The Canary a "leftwing Private Eye for idiots".
I’m unsure of how the people behind The Canary’s 3.5 million monthly hits would feel about being all labelled idiots, but there we are.

Whether you agree or disagree with The Canary's style and output – and I'll add the disclaimer here that I write for The Canary as well as CommonSpace – it cannot detract from the fact that it is a remarkable success story in terms of new media and how tapping into the underlying feeling of a certain demographic can yield results.

But more broadly with the new media, we have to be careful during our time of rapid growth. We should note there is always the danger of turning into the very thing we object to – operating in a propagandist-led vacuum.

It’s all too easy when you have to fight for every reader to merely tap into people’s confirmation bias. You see it all the time on Twitter, with people screaming "The BBC hates Corbyn!", "Corrupt MSM!" and the like – and it getting hundreds of retweets accompanied by rapturous applause, but with no challenge to the underlying notion of the argument in the first place.

It is also easy to ride the wave, say, of Corbyn or the SNP’s success. They are going against the established grain, there is a movement behind them and people have a desire to read commentary which appeases and solidifies their own support for these group’s crusades.

Articles based merely around people’s reactions on social media to a story, or those which piggyback off something reported by the mainstream media may get you views and followers. But what are they really telling your readers?

This is a dangerous path to wander down, as in time, when the current corporate media does die a death, all we’ll be left with is the same as what we have now except it won’t be Oxbridge educated.

Furthermore, we simply have to critique our "new kind of politics", however much its supporters may not like what we have to hear. It would be irresponsible of us, as journalists, not to – because otherwise we will merely end up doing what the BBC do: throwing out insipid analysis and watered-down government press releases which threaten an already weak notion of democracy – just to keep our viewing figures up and our own jobs secure. That’s not what journalism is about.

The old, established media and its new, fresh-faced rivals are both facing immense challenges at present; both are frantically scrabbling for the attention of the public, and in doing so both are showing their respective ages.

Both need to consider what they are doing, why they started doing it in the first place and where they want to end up – otherwise the current media wars will leave the public back where they started: uninformed, unrepresented and wholly unconcerned either way – and it is, ultimately, the public we are all here for.