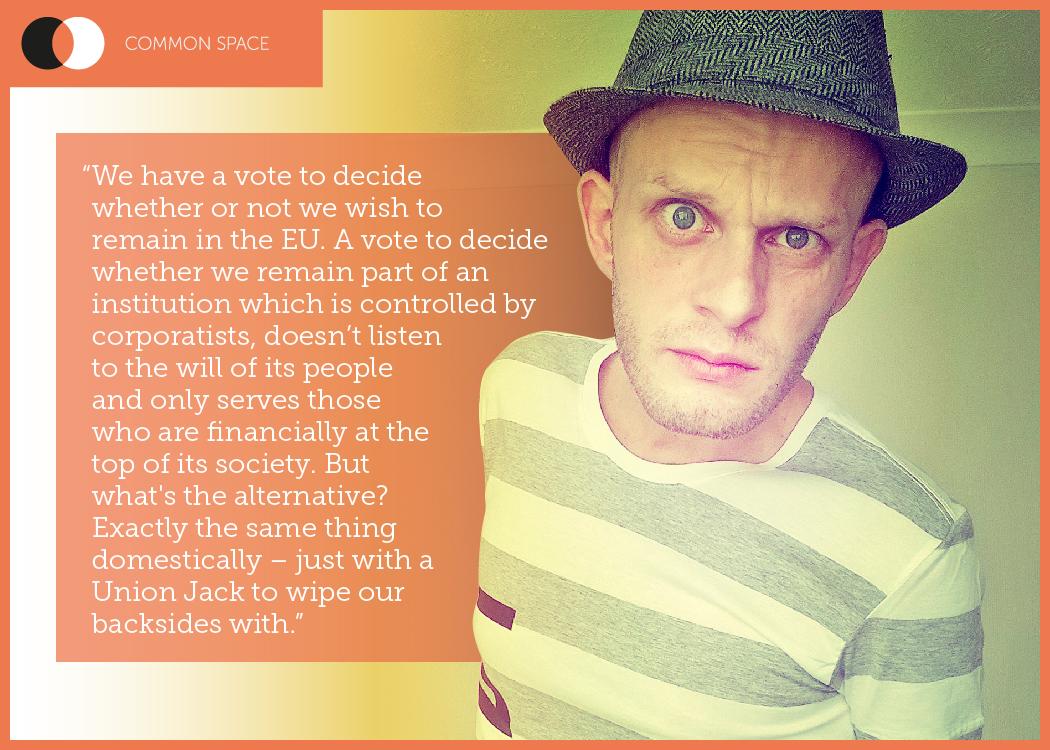 IT’S rare that a subject in politics moves me to complete disinterest (I even find the Liberal Democrats mildly entertaining); however, it’s official. The EU referendum has succeeded.

With 14 weeks still to go before the country goes to the polls (after a 35 per cent turnout in the 2014 EU elections, how much of the country will actually vote is debatable) and the arguments from both the In and Out camps as insipid as ever, just exactly who can we trust to tell us ‘the truth’ about the EU? And will a vote either way really make any difference to our lives? I am wholly unconvinced.

Take the somewhat varying economic figures being espoused by each camp. Vote Leave, one of the major Brexit campaigns, claims that the UK sends PS350m to the EU each week, whereas Stronger In says that EU investment is worth PS461m to the UK each week – so theoretically we are PS5.7bn better off a year in the EU, or in terms of each ‘household’ (a methodology both camps like to use) PS213 per household.

With 14 weeks still to go before the country goes to the polls and the arguments from both the In and Out camps as insipid as ever, just exactly who can we trust to tell us ‘the truth’ about the EU?

But put this in terms of our national GDP, and that is a mere 0.3 per cent of this financial year’s forecast. Hardly earth-shattering stuff.

But then if you compare the overall costs/benefits that both camps say the EU offers households, Vote Leave says it is a cost of PS1,222 per year, whereas Stronger In claims a PS3,000 benefit.

Stronger In does claim that there are additional benefits calculated by the CBI, that mean each UK household is PS3,000 better off each year by being in the EU – but these are subjective, as they include prices of goods and trade – which are subject to leverage from external forces aside from the EU.

Plus, the basic statistics from Vote Leave and Stronger In don’t match. The former claims each household sends PS674 to the EU every year, while the latter says it’s PS340. Is your head spinning, yet? Because I believe that’s possibly the idea.

We then, of course, have the ‘Change from Within’ argument regarding the democratic deficit in the EU. Those from the left, right and centre all claim that to make a difference we need to stick with the project, and try to alter how it operates from the inside – as trying from the outside would be impossible.

Take legislation in the EU Parliament. Unlike the House of Commons, laws are derived from, and designed by, the unelected EU Commission, then sent to parliament for approval.

Is your head spinning, yet? Because I believe that’s possibly the idea.

If legislation is approved on the first reading, it goes straight through. If parliament considers amendments are needed, it goes to the European Council (unelected in an EU capacity), then is sent back to parliament for a second reading, where it is either approved or binned.

This process usurps any input from institutions or organisations outside of the trio of the Commission, the Parliament and the Council – because a law can be passed on its first reading without any feedback, from anyone.

But then – what do we have in the UK? Laws can be proposed by MPs ( who sometimes are voted in by just 15.7 per cent of the electorate ), which can be filibustered by the party of government to ensure they receive as little debate time as possible; if they pass the first, second and third readings they then get sent to the House of Lords.

If the Lords think amendments are required, they get sent back to the Commons – and if the party of Government disagrees with these amendments, they just override the Lords anyway – see the Welfare Reform Bill .

Furthermore, one only has to look at the connections of these law-makers on both sides of the Channel to realise they are invariably not working in our interests.

In the EU we have Jean-Claude Juncker, president of the (unelected) European Commission. A former president of one of the world’s leading conduit tax havens, Luxembourg , he sat for many years on the World Bank and participates in American-style lobbying events with the CEOs of multinational companies – a system which is openly flaunted within the EU.

Then there’s Mario Draghi, president of the ECB – the man directly responsible for last year’s EUR1.36 trillion worth of quantitative easing by the bank. In 2002, he was appointed managing director of Goldman Sachs, one of the world’s largest (and most unveracious) investment banks.

Goldman Sachs naturally has reserves in many of the companies that the ECB has been or will be buying corporate debt from to spur the effect of the QE program, profiting from the increased share price the former appears to see whenever more QE is announced.

But is the UK really any better? You have one Mark Carney , governor of the Bank of England; former Goldman Sachs manager (widely credited with being one of the central players in Russia’s financial chaos of the late 1990s), who is also currently a director of the Bank for International Settlements (BIS) – the bank for the central banks, which is one of the most secretive organisations on the planet, but constructs global economic policy for all of us – behind closed doors.

Don’t forget our wholly unelected House of Lords, as well – 15 per cent with vested interests in Trident, 18 per cent linked to tax havens – and that is most likely just the tip of the iceberg.

Furthermore, the unelected civil servants representing our government in Brussels are of dubious backgrounds. Sir Ivan Rogers , the UK’s permanent representative at the EU, is a former Manager at both Barclays and Citigroup – specifically dealing with ‘public sector business’; that is, responsible for selling private finance to local authorities and corporations who wish to invest in them – or to you and me, privatisation.

Rogers also lobbied the EU to halt legislation on fracking, saying : “We will need a longer term strategy to manage the risks (from legislation) including … an influencing strategy for the new European Parliament and Commission.”

Don’t forget our wholly unelected House of Lords, as well – 15 per cent with vested interests in Trident, 18 per cent linked to tax havens – and that is most likely just the tip of the iceberg.

Let’s also look at the debate surrounding distinctly undemocratic Turkey joining the EU, which could be viewed as an extremely worrying example of what a future European Union may look like. For example, the EU has provisionally agreed a ‘one in, one out’ policy with the despotic administration of Erdogan, along with a possible EUR6bn pay-off for the privileged, automatic rights under the Schengen agreement and a nod to fast-track ascension to the EU. All for possibly violating international law.

There is no acknowledgement, of course, that it may be partly EU member states’ action in Syria which are causing these people to flee their country, but hey? What’s a few dead children on beaches between European friends?

But then the UK’s relationship with Turkey is no-less unpleasant. The UK Government issued over PS200m worth of arms export licences for Turkey in 2015, peaking at PS160m in April alone, and happily courts the country at international arms fairs while it continues to persecute the Kurds.

After the government took control of the opposition newspaper the Zaman almost a fortnight ago, David Cameron was mutedly silent – but the EU was hardly forthcoming with its admonishment, stating Turkey “needs to respect and promote high democratic standards and practices, including freedom of the media”.

The debate surrounding Turkey and the EU also highlights another problem – the fact that the UK will be losing its veto rights on the European Council in 2017 – not that politicians will let you know this.

George Osborne, when questioned by Andrew Marr on Sunday , said that regarding Turkey joining the EU we have our veto which enables this to override any decision like this. We currently do, yes, but quietly being kept from broad public knowledge is the fact that in March that year, every member state is losing its veto rights over 43 areas of legislation, which previously under the Nice Treaty we can block as a country if we wish.

Before new voting rules under the Lisbon Treaty came into force in November 2014, decisions surrounding these areas of law (which include social security, immigration, freedom of movement and energy) were subject to a unanimous vote in the European Council (i.e. if a single member state objected, the law would not pass).

We have essentially lost some of our right to self-determination over many of the most crucial areas of everyday life. But – is the say we have over UK law any better?

But from March 2017, all of these areas will now be legislated upon using the ‘qualified majority voting’ system – in layman’s terms, if 55 per cent of member states (representing 65 per cent of the EU population) agree with a law, it will pass.

We have essentially lost some of our right to self-determination over many of the most crucial areas of everyday life. But – is the say we have over UK law any better?

We have the government’s parliamentary e-petition system – which gets conveniently ignored if they don’t like the topic in-hand; we have a Conservative Government trying to completely crush the Trade Unions, so as to render them effectively impotent; we have the ‘Snoopers Charter’ which will allow those in charge of us to look at our private correspondence – with no judicial oversight; but most of all we have a Conservative Government which appears to think it can pretty much do whatever it likes, without recourse – you only have to look at the cuts to ESA, the junior doctors contract and the Google tax fiasco to realise they care not whether we approve of their actions.

So, here’s the thing: we have a vote on 23 June to decide whether or not we wish to remain in the EU. A vote to decide whether we remain part of an institution which is controlled by corporatists, doesn’t listen to the will of its people and only serves those who are financially at the top of its society. It has echoes of the Scottish independence referendum, no?

But what’s the alternative? Exactly the same thing domestically – just with a Union Jack to wipe our backsides with.

We are completely trapped between a rock and hard-place, so ultimately yours and my vote will come down to what we feel in our hearts is the right thing to do.

We are completely trapped between a rock and hard-place, so ultimately yours and my vote will come down to what we feel in our hearts is the right thing to do – whether it will be easier to force change in the EU, or force it domestically.

Personally? I don’t think a vote either way will make one damned bit of difference as both the EU and UK Governments, as institutions, are controlled by forces greater than themselves – the multinational corporations.

So excuse me if I nod off occasionally over the next three-and-a-bit months, and if I do please wake me up on 24 June, when probably very little will have changed.