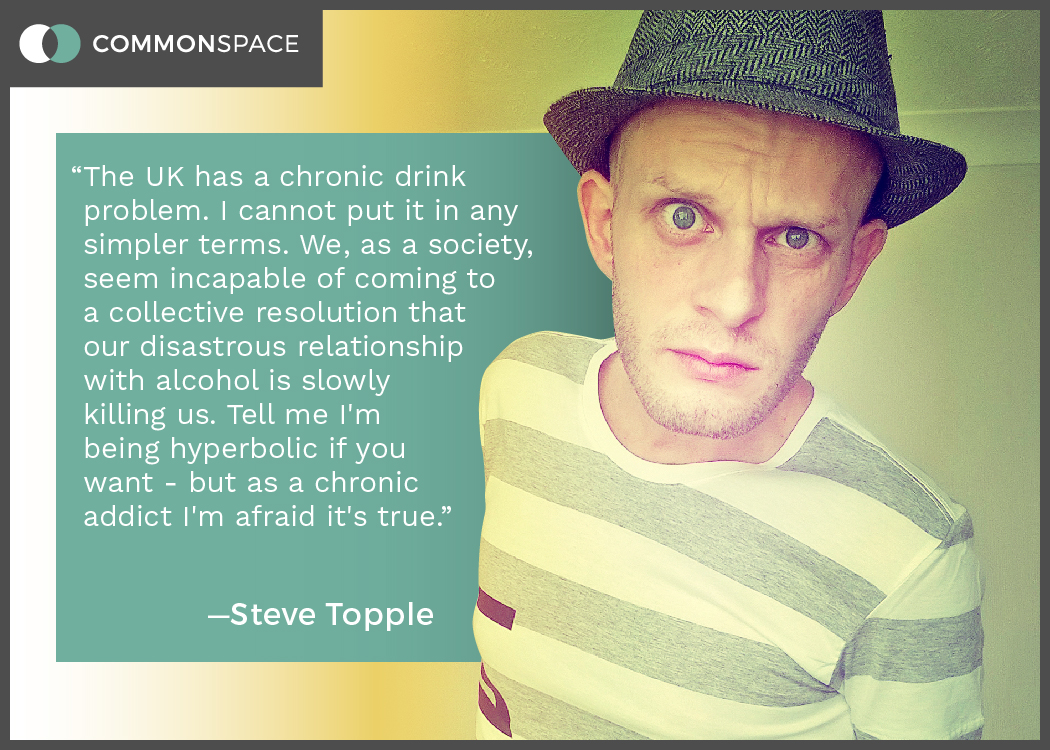 I LOVED Amy Winehouse – and anyone who knows me, knows I 'don’t do' the whole culture of celebrity.

But Amy was something special. As someone who was brought up surrounded by music (my late father was a professional jazz musician), she was up there with the best. Billie Holiday, Sarah Vaughan, Ella Fitzgerald. And Amy.

What made her so unique, and her talent so raw, was her obviously tortured soul that came pouring out every time she opened her mouth to sing or put pen to paper to write. It was her demons that made her who she was, sadly – and they were demons which were, in my opinion, sorely misunderstood.

Alcohol didn’t kill Amy Winehouse. Its effects may have done, physically (the coroner recorded a verdict of 'death by misadventure' – her blood alcohol levels were five times that of the legal drink-drive limit). For someone who lived with bulimia, and the devastating impact it has on the body, that last bottle of vodka was too much for her to take.

What killed Amy was her addiction.

Watching the heart-breaking documentary 'Amy' and the final few hours leading up to her death, the signs were all there. Phone calls to friends, saying how sorry she was. "I’m so sorry. I’m so sorry. Can I see you?" Her friend described the conversation as "My Amy. Completely normal". Wanting to see them. An almost desperately forced happiness. But it wasn’t normal.

Amy had given up, which is the most dangerous trap an addict can fall into – and I write this as an alcoholic of over a decade, who has just had a (rather public) relapse. And as someone who has nearly given up.

There is a myth I’d like to bust, from the outset: that groups like Alcoholics Anonymous are some miraculous solution – when in reality they actually aren’t. For all the evidence that is proffered regarding the wonders it works, it never takes into account personal circumstances.

Amy had given up, which is the most dangerous trap an addict can fall into – and I write this as an alcoholic of over a decade, who has just had a (rather public) relapse.

I’ve been to AA. I’ve worked the programme, attempted the 12 steps, and I found it utterly lonesome, disconnecting and, quite frankly, self-centred.

It doesn’t take into account the underlying reasons why people are addicts – it merely deals with the symptoms, never addresses the cure. This is, in my opinion, what was missed with Amy – and what we miss as a society, more broadly.

The UK has a chronic drink problem. I cannot put it in any simpler terms. We, as a society, seem incapable of coming to a collective resolution that our disastrous relationship with alcohol is slowly killing us. Tell me I'm being hyperbolic if you want – but as a chronic addict I'm afraid it's true.

Overall alcohol consumption in the UK is now above the OECD average, and the NHS cost to every taxpayer is £120 per year.

AA doesn’t take into account the underlying reasons why people are addicts – it merely deals with the symptoms, never addresses the cure. This is, in my opinion, what was missed with Amy – and what we miss as a society.

Delve a little deeper into the statistics, however, and the trends become even more concerning. Rates of A&E admissions due to alcohol poisoning were three and a half times higher among those living in the 20 per cent most deprived areas of England than those in the least (and the gap is widening).

Across the seven defined socioeconomic statuses (SES), 24 per cent (the highest figure) of all alcohol-related deaths were in the bottom category ('routine occupations'), and these individuals are nearly three times more likely to develop alcohol-related liver disease than those in the top.

We seem incapable of dealing with the fact that addiction is a class-related problem, and also one that is a mental health issue. Amy’s life is a case in point for the latter – of someone who was on anti-depressants from the age of 14.

Her relationship with Blake Fielder-Civil was probably one of the most toxic aspects of her life; one of living with a co-dependant – and as an alcohol counsellor said: "I would personally find it almost unethical to take the couple into rehab at the same time."

She was also surrounded by leeches, in my opinion. From her father, to Fielder-Civil, all bleeding her dry, for every drop they could take.

Figures released in late December by the Nuffield Trust showed a 63 per cent rise in the number of alcohol-related hospital in-patient admissions since 2005.

But it was more than that. She knew she was self-destructive. "Yeah. I’m fucked up. I’m fucked up in the head," she said in a voicemail left for her bodyguard Andrew Morris. The night Amy won a Grammy was a prime example: her reaction to her best friend was "This is so boring without drugs".

I re-watched the 'Amy' documentary because I, in writing this, didn’t want to do her a disservice. But watching footage of her performing in Belgrade, where she was completely incoherent, it is obvious she had given up. And this is the crux of the matter – and one which is so deeply misunderstood.

There are only so many times you can scrape yourself up from the floor. Only so often you manage to drag your sad carcass back up again, before your mind is no longer willing to fight any more. This is what happened to Amy. It wasn’t so much the physical aspects that killed her, but the implications on her mental health, and that she had literally given up.

And this is the aspect of addiction which is so sorely misunderstood; the trick we are missing, if you like.

I’ve been through every rehab programme going. I’ve been to clinics where they’ve asked me, "So, how much would you like to be able to drink a day?"; "What is a safe level for you?". My response has generally been: "You really do not have a fucking clue, do you?"

What is missing in the treatment of addicts is what is known as 'dual diagnosis'. I’m sticking my neck out, here, because it is a highly controversial topic, but one that I firmly believe in.

What is missing in the treatment of addicts is what is known as 'dual diagnosis'. I’m sticking my neck out, here, because it is a highly controversial topic, but one that I firmly believe in.

Dual diagnosis is hotly debated. It is often seen as a "barrier to recovery"; that is, you cannot deal with the fundamental issues surrounding your addictive, compulsive tendencies and treat at the same time any other problems a person has with their mental health because the former gets in the way of dealing with the latter.

This, in my opinion, is fundamentally flawed on two levels. One, it makes the mistake that there is such a thing as "recovery". There isn’t. You do not recover from an addiction – you merely learn to manage it on a daily basis. Two, it makes the grave error that mental health problems are a result of substance abuse – when in fact, they are generally the cause.

You don’t just become an addict overnight. I sit here writing this as someone who is still not sober – it’s currently 7.30am in the morning, and I’ve been drinking since 3am. But the reason you continue to drink is not to alleviate the physical complications – like the well-known 'DTs', or the cold sweats – the reason you continue to drink is to block out the underlying disgust you feel with yourself, as a person.

I hate myself. Simple as. I have an inherent self-loathing that I just cannot shift – but this is where dual diagnosis would help me, and would’ve helped Amy.

Addiction doesn’t care if you’re rich or poor. I’ve sat in rooms with alcoholics who have been managing directors of multinational companies; teachers; housewives; unemployed people.

Her underlying mental health problems did, in my opinion, stem back to the breakdown of her parent’s relationship – and this was an issue which was never addressed. You could see it in her eyes. There was an almost vacant look about her, one which ran deeper than just the problems of an addict – one which was of a tormented soul, who had lost her way in life and could never find the path back.

Dual diagnosis is essential. We, as a society, have to stop viewing addicts as "that problem" – you know, the one which the poor bring upon themselves ('cause they spend all their dole money on Special Brew). If they stopped drinking for a few weeks, got off their backsides and got a job, then they wouldn’t need to drink; and as for the rich – well, it’s 'cause they have all this money, and who wouldn’t get drunk all day, every day if they could?

Addiction doesn’t care if you’re rich or poor – Amy Winehouse is proof of this. I’ve sat in rooms with alcoholics who have been managing directors of multinational companies; teachers; housewives; unemployed people, all before they all became the same as each other – drunks.

But while addiction has no class prejudice, it is more prevalent among those of a lower socioeconomic grade – and this is something our health service has to begin addressing.

We have to acknowledge the link between addiction and mental health, because Amy was a case in point. There were so many missed opportunities and interventions that could have happened – not least with her bulimia, but with her underlying emotional problems, her self-loathing and her obvious feelings of wretchedness.

We have to address our attitudes towards addiction as a society, because our relationship with those who do suffer from that illness is as toxic as the illness itself.

I don’t cry easily. It takes a lot. But whenever I watch 'Amy' I shed many tears, because I see someone who was so desperately reaching out for help, who was crying out to be saved – but in the end, wasn’t.

She could’ve been saved, if only the right help was given to her. And we have to address our attitudes towards addiction as a society, because our relationship with those who do suffer from that illness is as toxic as the illness itself.

Oh, and if you’re wondering why I wrote this?

Ms Winehouse sums it up.

"I wouldn’t write anything unless it was directly personal to me."

If you’ve been affected by Steve’s story and would like to seek help, visit supportline.org.uk’s list of organisations which may be able to assist or call Drinkline’s free and confidential helpline on 0300 123 1110 (weekdays 9am–8pm, weekends 11am–4pm).