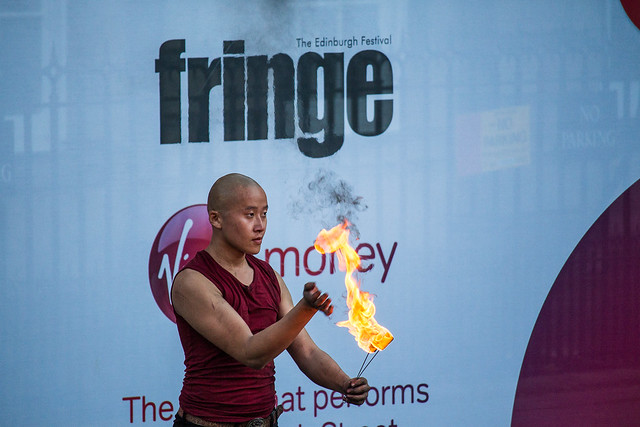 THE FAIR FRINGE CAMPAIGN today [29 July] published its new ‘Advertising Exploitation’ report, documenting the practices used by companies at the Edinburgh Fringe to recruit staff and reigniting controversy over the working environment of the world’s largest arts festival.

In 2018, the Fair Fringe campaign – which aims to raise awareness of exploitation at the Fringe and bring pressure to bear upon unethical employers – published the first of these reports, identifying a number of practices which “appeared to be unlawful”, according to Fair Fringe activists. Now, the campaign’s latest findings have shown that problems of “blatant” exploitation and “terrible” employment rights have not only persisted, but have become more resistant to transparency.

The report states: “We noticed that this year companies have been far more secretive about their pay and conditions – they now know we are watching and their exploitation will not go unchallenged.”

While the report acknowledges that “massive strides forward” have been made, many of the issues raised by the campaign since its founding two years ago have endured. CommonSpace takes you through some of the report’s key findings, and the biggest problems facing workers during the capital’s festival season.

The new report notes that some festival employers openly advertise practices which “could be seen as discriminatory on the basis of age”, with many Fringe job adverts excluding applications under the age of 18 for “no obvious justifiable reason”, such as handling alcohol.

In light of the fact that Scottish Government’s industrial relations agency ACAS decrees that workers under 18 are entitled to extra rest breaks, at least two consecutive days off per week, and cannot opt out of the Working Time regulations, the report speculates that employers may have decided they are unwilling to give under-18 workers the additional rights they are entitled to, and therefore exclude them from applying.

Other employers have advertised pay rates which discriminate on the basis of age. While this is not unlawful, the Fair Fringe campaign argues this is “clearly unfair”, and that paying workers the bare minimum wage is “not nearly enough to live on.”

According to the report, Fringe venue The SpaceUK asks that its box office assistants and press officers of all ages do the same job, but does not pay them equal wages depending on their age. Their recruitment pack states: “Those under21 will receive £6.15 per hour, those aged 21 to 24 will receive £7.70 per hour and those over 25will receive £8.21 per hour.”

Further concern over pay discrimination at the Fringe was raised this week by the publication of new research by the activist theatre company Power Play, compiled in collaboration with the Edinburgh Festival Fringe Society and the Fringe venue the Pleasance which found that men are earning an average of 60 per cent more than women at the Fringe – around seven times the national average.

The Fair Fringe report also raises the practice of mandatory photo applications for Fringe jobs. The report states: “We consider this an extremely poor recruitment practice, because it allows employers to easily discriminate on the basis of age, gender, race, disability, or simply their looks.”

The Fair Fringe campaign argues that their position is supported by the Equality and Human Rights Commission, citing Point 16.42 of their Statutory Code of Practice on Employment: “Applicants should not be asked to provide photographs, unless it is essential for selection purposes, for example for an acting job; or for security purposes, such as to confirm that a person who attends for an assessment or interview is the applicant.”

The Fair Fringe campaign has been strongly against Fringe venues staffing positions with ‘volunteers’ since it was founded, but their latest report indicates that the practices remains widespread. As the report argues, “You can’t pay bills or buy food with experience, and volunteers don’t have the same employment rights as workers and employees.”

The debate over the acceptability of volunteer labour during the festival season has proven to be a central bone of contention between the Fair Fringe campaign and Fringe Society director Shona McCarthy, who earlier this year publicly disagreed with the Fair Fringe demand that every festival worker be paid the then-Living Wage of £8.75.

In an interview with the Sunday National newspaper in June this year, McCarthy attempted to clarify her objection, saying: “My point was, ‘what about the Quaker Meeting House, which is completely dependent on volunteers?’” McCarthy defended the use of non-employees as Fringe staff, saying a great proportion of the work done during the festival season is a “very positive volunteer effort”, and emphasising her belief that a one-size-fits-all approach cannot apply across all venues.

The Advertising Exploitation report is unmoved by such justifications of current practices: “Some festival employers insist that if they paid their staff a proper wage their business would collapse. But the reality is that any business which can’t afford to pay its staff properly cannot afford to operate. It is simply unacceptable, and wholly outwith the spirit of minimum wage legislation, to use volunteer labour to lower operating costs.”

Even amongst paid employees, the Fair Fringe report has found that in many cases, salaries are not commensurate either with the Real Living Wage or the cost of living in the notoriously expensive city of Edinburgh – “particularly during the festival when rents and other prices skyrocket.”

While the Fringe Society has boasted that the festival is worth £200 million every year, the Fair Fringe campaign argues that “the festival workers who make it all happen don’t always get their fair share”, and that some employers “make a profit at the expense of their workers, who aren’t paid enough to live on.”

Not only do some employers fail to pay the Real Living Wage – such as the major Fringe venue Underbelly, which advertised roles for bar, box office and front of house staff at £8.21 per hour, the legal minimum wage – but many advertise posts which do not even pay that. According to the Fringe Society’s 2017 syrvey of festival workers, more than 50 per cent of respondents who received an hourly wage said that it was less than the then-minimum wage of £7.50. This year, Fair Fringe research found “many” employers advertising posts paying £8 per hour.

Over the course of the Fair Fringe campaign’s activism, certain high-profile venues have come in for repeated criticism, perhaps most notably C Venues, which gained the campaign’s attention after what the report describes as “an astonishing number of bad reports.”

This led to them being named in last year’s Advertising Exploitation report, winning two out of the three of the Fair Fringe campaign’s ‘Bad Boss Awards’, and facing demands that it be barred from the Fringe. Accusations against C Venues included underpayment of employees, the flouting of fair work practices, and overcrowded and substandard accommodation for their workers. Several of these accusations were verified by CommonSpace in 2018, after speaking an anonymous C Venues employee. All this led to the publication of a Fair Fringe report earlier this year, exclusively focusing on C Venues’ practices.

However, the new Advertising Exploitation report says, “having reviewed C Venues adverts and offer forthis year it is clear that little has changed.” While the venue has made some changes in how they advertise their volunteers, they have removed any references to pay on their website, instead referring to a commitment to a “small contribution to your subsistence expenses.”

Regarding shift lengths, C Venues told the Fair Fringe campaign: “Volunteer shifts are typically around 8 to 10 hours. During some daysin the fit-up and get-out periods, shifts for some roles can be up to 12 hours a day, and on the few occasions we have overnight technical rehearsals, some shifts for technicians and managers canbe up to 13 hours.”

In 2018, staff at C Venues told the Fair Fringe campaign that they had failed to recruit enough volunteers, meaning that shifts were “consistently at the upper end of these estimates, and sometimes much higher.” However, even the lowest estimate of 8 hours per shift, averaging the four days off throughout the festival, gives an average weekly workload of 51.2 hours, which is above the legal maximum of 48 hours. The report cites claims from staff that last year, some were routinely working 65 hours per week, and were made to feel guilty if they worked less.

Another point of controversy has been the accommodation provided to C Venues volunteers, following reports of overcrowding. In their volunteer information pack, C Venues writes: “A typical room might be for two or three people, in a large bedroom with one double bed and one or two mattresses… Expect to queue for the bathroom at times,though we try and rotate shifts so that not everyone in the flat is starting at the same time. Due to the nature of the short-term rental market, flats don’t generally have wifi.”

The report argues: “Living in these conditions might be acceptable for a few days, but 46 days living away from home with strangers in overcrowded spaces, with no privacy, no security, and no internet is surely unacceptable.”

Although the Fair Fringe campaign has had great success in raising both awareness and solidarity amongst Fringe workers, and even affecting some tentative changes in venues themselves – the famous comedy venue The Stand, for example, has signed up entirely to the Fair Fringe Charter – Fair Fringe activists remain painfully aware of how much needs to be done.

Speaking to CommonSpace, a Fair Fringe spokesperson said: “It is shocking that, once again, we are still seeing people excluded from Fringe jobs because they ‘don’t look the right way’, being offered poverty pay – far below the minimum wage, working ludicrous hours and being denied time off.

“We’ve seen lots of great improvements after the spotlight our campaign has shone on their dodgy practices, but that just underlines how unacceptable it is that so many companies refuse to. This report shows that there is still a long way to go to root out exploitation from the Fringe.”