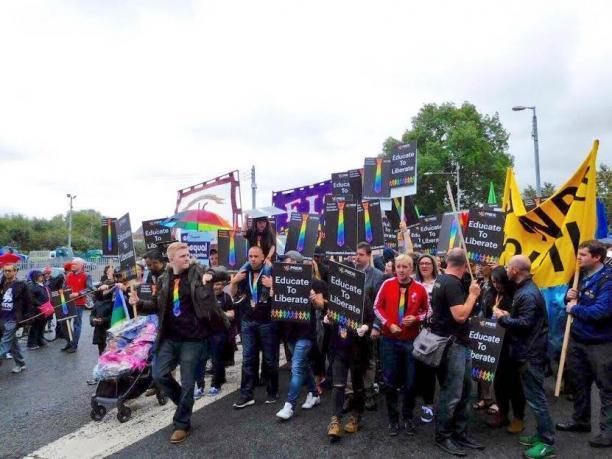 ALMOST HALF of LGBT pupils in Scotland facing bullying in school, while many fail to receive sufficient education or support from teachers, according to new research from LGBT charity Stonewall Scotland.

Stonewall Scotland’s newly published School Report Scotland, commissioned via the Centre for Family Research at the University of Cambridge, examined the experiences of 402 Scottish LGBT young people between the ages of 11-19, as part of a wider study including 3,713 LGBT young people across the UK.

The report, which focuses on Scotland, is the second published by Stonewall since 2012 and the first to include the specific experiences of trans youth in Scotland since Stonewall’s 2015 decision to extend its remit to include trans equality.

The report found that 48 per cent of LGBT young people in Scotland, including 71 per cent of trans young people, have experienced bullying for being LGBT in Scottish schools.

Seventeen years after the repeal of Clause 2a by the Scottish Parliament, 41 per cent of LGBT young people say they are never taught anything about LGBT issues.

The report also suggests that schools are failing badly to provide adequate support and education to LGBT pupils.

Only 32 per cent of bullied LGBT young people said that teachers intervened when they were present during the bullying, while 72 per cent reported that teachers or school staff ‘sometimes’ or ‘never’ challenge homophobic, biphobic and transphobic abuse when they hear it. Forty-five per cent said that there is no adult at school they can talk to about issues relating to being LGBT.

More than half of trans young people (53 per cent) say that their school’s staff are not even familiar with the term ‘trans’ or its meaning, while 65 per cent feel they cannot feel comfortable while using school toilets and 36 per cent are not able to be known by their preferred name at school.

Seventeen years after the Scottish Parliament’s repeal of Clause 2a – a piece of Thatcherite anti-LGBT legislation, known as Section 28 elsewhere in the UK, which mandated that local authorities should not “promote the teaching in any maintained school of the acceptability of homosexuality as a pretended family relationship” – 41 per cent of LGBT young people say they are never taught anything about LGBT issues in school or college.

“Unfortunately, the high rates of bullying and the experiences of LGBTI youth highlighted in this report are unsurprising.” TIE campaign spokesperson

Responding to the report, a spokesperson for the Time for Inclusive Education (Tie) campaign, which aims to combat homophobia, biphobia and transphobia through LGBT-inclusive education, told CommonSpace: “The findings in Stonewall Scotland’s new school report further emphasise the need for robust action on tackling homophobic, biphobic and transphobic bullying and prejudice based attitudes in our schools.

“Unfortunately, the high rates of bullying and the experiences of LGBTI youth highlighted in this report are unsurprising and consistent with our experience of working with schools across the country.

“In order to tackle prejudice, we must educate. We are confident that the stubborn prevalence of homophobic, biphobic and transphobic attitudes will be indefinitely challenged once the proposals outlined in our campaign pledge are implemented.

“Our goal, as a society, should be to transform the way in which LGBTI young people live, learn and love. That can be achieved by ensuring the provision of LGBTI-inclusive education in all schools and that is what we, along with educational stakeholders, will deliver.”

In response to its findings, Stonewall Scotland has recommended that the Scottish Government develop a national approach to supporting LGBT youth, ensure training on LGBT issues is accessible to all school and college staff in Scotland, fast-track their Anti-Bullying Strategy and develop clear guidance for local authorities on the recording and monitoring of anti-LGBT bullying.

It further recommend that Education Scotland should make the prevention of homophobic, biphobic and transphobic bullying a part of the framework for future school inspections, ensure teachers have guidance on hate crimes and sexual offenses in schools, as well as working with NHS Scotland to ensure that sex and relationship education is LGBT-inclusive.

These recommendations broadly back up the policy demands made by the Tie campaign, which seeks new legislation within the current parliamentary term, requiring that schools proactively tackle homophobia, biphobia and transphobia via monitoring, teacher training and curricular inclusion. Calls for LGBTI-inclusive education have also been backed by EIS, Scotland’s largest education union.

Picture courtesy of the Tie campaign