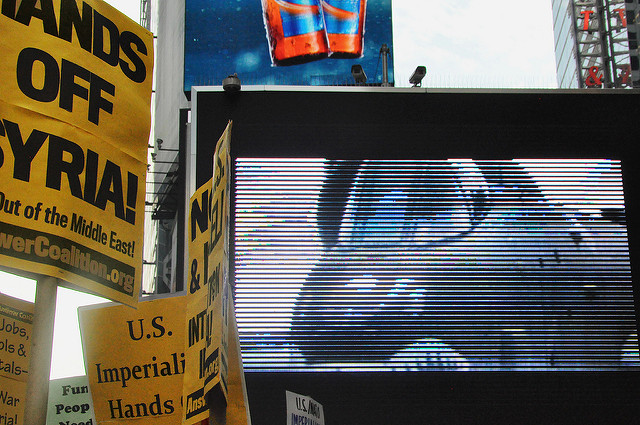 ANTI-WAR CAMPAIGNERS have warned against “the escalation of war” in Syria, as Prime Minister Theresa May comes under pressure to commit the UK to new military strikes against the Assad government.

Following the bombing of the rebel-held Syrian town of Douma that reportedly involved the use of chemical gas, which Syrian opposition militants and rescue workers have alleged were employed by Syrian government forces, Theresa May has indicated that she had not ruled out the possibility of UK military retaliation against the government of Syrian president Bashar al-Assad.

The Syrian Government has denied being behind the chemical weapons attack, and along with Russia have stated that they want to facilitate a visit of the the Organisation for the Prohibition of Chemical Weapons (OPCW) to the site of the alleged attack.

The Stop the War coalition has stated that “the attack must not be used to justify military intervention”, while SNP defence spokesperson Stewart Macdonald has called for a vote in the House of Commons on any new military action.

After the Prime Minister spoke to US President Donald Trump and French President Emmanuel Macron about the Douma attack, May declined to answer directly on whether the UK would join the United States in military action against Syria, but told press: “We believe that those responsible should be held to account.”

READ MORE: Syria: How did the war start and how will it end?

The Times newspaper has reported that May is under pressure from both ministers and allies to align with a US-led military strike against the Assad government, with unnamed “senior figures” arguing that the UK risks losing influence with Washington if it does not do so.

UK Labour leader Jeremy Corbyn has called for all parties to urgently cooperate with a United Nations investigation to establish culpability for the alleged chemical attack.

“The Prime Minister must not escalate the UK’s role in Syria without asking parliament.” SNP defence spokesperson Stewart McDonald

Speaking on Monday at Labour’s local London elections launch, Corbyn said: “The United Nations has called for an urgent and rapid inquiry into it and indeed a reopening of inquiries into previous uses of chemical weapons. The tragedy and the terror of people’s lives in Syria can only end by a political solution.”

Elsewhere, prominent Conservative MPs have argued that May should join with potential US-led strikes without a parliamentary vote on the matter.

Speaking to the Evening Standard newspaper, former attorney general Dominic Grieve said: “In view of the enormity of what has been done, if there is a way of preventing its recurrence by the limited use of force that is one thing and I would be supportive.” However, Grieve noted that any wider campaign against Syrian government forces would require parliamentary consent.

Earlier this year, UK Foreign Secretary Boris Johnson said that the UK should consider a punitive response to the Syrian government in the case of a proven chemical attack by their forces.

Additionally, former prime minister Tony Blair has urged May to be “supportive” of potential US strikes against Syria, arguing that the Prime Minister did not require a parliamentary vote to authorise military action.

This position was backed by Tory MP Johnny Mercer, who wrote in the Daily Telegraph newspaper that May should respond militarily without a parliamentary vote, describing Westminster as a “uniquely useless” means of conducting foreign policy.

However, the SNP’s Stewart McDonald, MP for Glasgow South, said on Twitter this morning: “The Prime Minister must not escalate the UK’s role in Syria without asking parliament. The 2015 motion that the government carried was for very specific action. Anything more must come before MPs.”

According to the Huffington Post UK, McDonald has won the support of some Labour, Liberal Democrat and Green MPs in his demand for parliament to have a say on any potential military strikes against Syria by British military forces.

The Scottish Government, the SNP, Scottish Labour and the Scottish Greens did not respond to inquiries from CommonSpace seeking confirmation on whether they would support or oppose UK military action against Syria at the present time.

“We condemn all outside military intervention including that of Russia and Iran. But equally we condemn that of our own government and its allies.” The Stop the War Coalition statement

Meanwhile, Scottish, UK and international anti-war and anti-imperialist activists have quickly rallied in opposition of any further Western military intervention in Syria.

In a statement released on Monday, the Stop the War Coalition condemned the bombing of the people of Douma, but argued that the attack “must not be used to justify more military intervention.”

The Stop the War Coalition said: “Yet again, the main victims of this war are the ordinary people of Syria, who have now suffered seven years of war which has left many dead, and many more refugees.

“The attack must not be used to justify more military intervention. We condemn all outside military intervention including that of Russia and Iran. But equally we condemn that of our own government and its allies. Already Donald Trump has promised retaliation and there has been a missile attack on a Syrian airfield, most likely by Israel. France and Britain are likely to support further such action.

“The Middle East has become the site of endless war following the invasion of Iraq in 2003 – an invasion we opposed and about which we were proved right. In recent months there has been Western bombing in Iraq and Syria, not to mention the Western backed Saudi war in Yemen.

“It is surely the height of hypocrisy for those supporting such wars to now claim their military can help those under threat in the Syrian war.

“The idea that Israel – whose troops shot 28 unarmed civilians in the past two weeks, and killed thousands in its bombings of Gaza – should now be attacking Syria over its attacks on civilians is grotesque.

“This escalation of war is highly dangerous. The only solution in Syria is a ceasefire on all sides and a political settlement – military intervention has already been proved to have failed.”

“The only solution to the conflict in Syria is a negotiated settlement, and the exit of all foreign forces and actors from the conflict.” New Foreign Policy board member David Jamieson

In Scotland, David Jamieson, board member of the Scotland-based New Foreign Policy think tank, spoke to CommonSpace on why he believes further military intervention in Syria must be opposed, saying: “The appalling attacks in Douma show that military intervention by the West in Syria has resolutely failed to stop any violence.

“In a grimly familiar ritual, the media is full of pro-war commentators demanding that the west ‘do something’ about Syria, something invariably meaning bombing or even the commitment of ground forces.

“These calls ignore that fact that there is already a massive US and UK bombing campaign in operation in Syria with some 15,000 strikes launched and thousands of casualties according to monitors. Thousands of US troops are already on the ground in the country.

“Foreign intervention, by the US and UK, by Turkey and Saudi Arabia, Russia and Iran is only fuelling and worsening the now seven year old conflict.

“Further military intervention by the US and UK can only add to the vortex of violence and chaos. The only solution to the conflict in Syria is a negotiated settlement, and the exit of all foreign forces and actors from the conflict.”

“The US has never cared about human rights and has already lied before about ‘weapons of mass destruction’ to justify unilateral wars that have destroyed entire nations.” ANSWER coalition statement

Jamieson went on to call for anti-war activism, both in Scotland and internationally, to increase its campaigning in anticipation of possible military action: “People across Scotland, the UK and the world overwhelmingly oppose further military intervention. All Scottish and UK political parties must obey the public consensus and actively oppose further military intervention by the UK.”

In the United States, the Act Now to Stop War and End Racism (ANSWER) coalition, a long-standing national anti-war and anti-imperialist campaign group, coordinated emergency protests in Los Angeles against attacks by the US against Syria, arguing: “The US has never cared about human rights and has already lied before about ‘weapons of mass destruction’ to justify unilateral wars that have destroyed entire nations.”

The Stop the War Coalition is urging the public to lobby their local MPs to oppose military action in Syria.