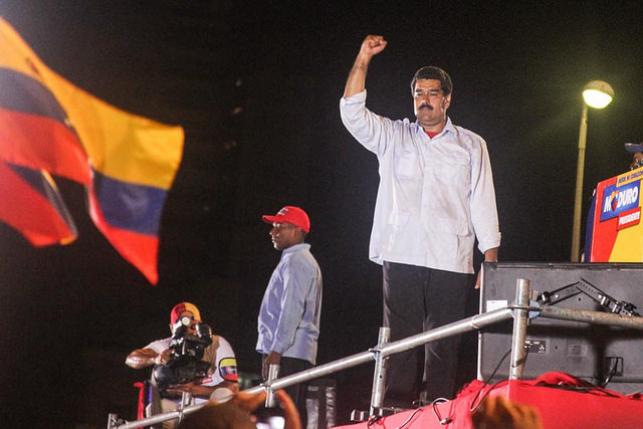 ANTI-WAR CAMPAIGNERS have condemned US policy on Venezuela, following revelations that the Trump administration held secret meetings over the past year with rebel elements of the Venezuelan military to discuss plans to overthrow the government of Venezuelan president Nicolás Maduro.

On 8 September, the New York Times newspaper revealed that representatives of the US Government had established clandestine communications with several Venezuelan military officers to discuss the possibility of a coup against the ruling socialist government. According to the Times report, one of the Venezuelan military figures involved is listed on the United States’ own sanctions list, due to accusations of torture and drug-trafficking.

Although the talks in question reportedly stalled, the news has sparked fresh controversy about US policy in the region and the possibility of US-backed regime change in Venezuela, which saw an attempted coup against the government of former president Hugo Chavez in 2002 backed by both the administration of George W. Bush and the Spanish Government.

Speaking to CommonSpace, the Stop the War Coalition vice chair Chris Nineham said: “There is a long history of US interventionism in Latin America, which has particularly included Venezuela in the recent past. This is further proof of Donald Trump’s increasingly belligerent foreign policy, which is destabilising the world on multiple fronts. US-led sanctions against Venezuela have played a key role in creating a crisis there in the first place.”

Labour MSP Neil Findlay, who put forward a Scottish Parliament motion in the aftermath of former Venezuelan president Hugo Chavez’s death in 2013 recognising his government’s “social reforms aimed at addressing the legacy of inequality” in Venezuela, also told CommonSpace: “I think it is clear that there are forces at play across Latin America trying to undermine democracy.

“In relation to Venezuela economic sanctions, a fall in oil production and social and economic unrest are all being exploited by the Trump administration to promote their overall policy objective of regime change. There are huge social, economic and humanitarian issues that need addressed in the country but these will not be addressed through a foreign power revisiting the failed interventionist policies of the 70s and 80s.”

“I think it is clear that there forces at play across Latin America trying to undermine democracy.” Labour MSP Neil Findlay

CommonSpace sought reaction from both the UK and Scottish Governments on the heightened possibility of US foreign intervention in Venezuela, but both declined to comment.

Garrett Marquis, a spokesperson for the US National Security Council, did not deny the details of the New York Times’ report, but said in a statement that the “US policy preference for a peaceful, orderly return to democracy in Venezuela remains unchanged.”

Nevertheless, President Donald Trump last year stated the United States was considering all possibilities regarding action against Venezuela, including the “military option.”

Following the New York Times report’s publication, Venezuelan foreign minister Jorge Arreaza tweeted in Spanish that the revelations “brought to light new and crude evidence” of a coup plot. Speaking on behalf of the Venezuelan Government, Arreaza continued: “We denounce before the world the United States’ intervention plans and help to military conspirators against Venezuela.”

Bolivian President Evo Morales, a key regional ally of the Maduro government, also stated on Twitter: “We condemn Trump’s coup conspiracy by holding secret meetings with Venezuelan military traitors to overthrow our brother Nicolás Maduro. The free countries of Latin America will withstand and defeat any further attacks of the Empire against the peace and democracy in the region.”

We condemn Trump’s coup conspiracy by holding secret meetings with Venezuelan military traitors to overthrow our brother Nicolás Maduro. The free countries of Latin America will withstand and defeat any further attacks of the Empire against the peace and democracy in the region

However, the Trump administration’s actions were defended by some within the American foreign policy establishment, including Council on Foreign Relations president Richard N. Haass, who tweeted: “For those here and [in] the region who will be quick to criticise the administration for this, I ask what is your policy other than watching Venezuela become a failed state that is starving and crushing its people and creating hundreds of thousands of refugees?”

During the failed 2002 coup attempt, Hugo Chavez was removed from office for 47 hours and replaced with an unelected government led by Venezuelan business leader Pedro Carmona, who dissolved the nation’s constitution and was quickly driven from power following mass protests; Chavez was returned to office shortly afterwards with the aid of popular support and military loyalists.

Since 2002, the Venezuelan Government has repeatedly accused the United States of aiding opposition groups in an attempt to foment regime change. Despite widespread economic crisis following the collapse in oil prices in 2014 – which the Maduro government has attributed to the effects of “economic war” by the United States – the ruling United Socialist Party of Venezuela has been repeatedly re-elected since its first triumph in 1999, and has remained in power ever since.

The Trump administration has escalated tensions between the US and Venezuela by imposing further economic sanctions against the oil-rich nation, prompting president Maduro to comment last year: “I don’t listen to orders from the empire, not now or ever … Bring on more sanctions, Donald Trump.”

Despite Maduro’s defiance, Venezuela continues to face hyperinflation, widespread shortages of basic goods, mass emigration and political unrest. Opposition parties and foreign critics have attributed the ongoing financial crisis to the policies, mismanagement and alleged corruption of the Venezuelan Government, which have attempted to use Venezuela’s once-envied oil wealth to combat poverty and inequality. The Maduro administration has instead blamed US economic sanctions for its enormous inflation rate, and shortages on illegal hoarding and other means of sabotage by opposition-aligned businesses.

Following the re-election of Maduro in May this year, then-UK Foreign Secretary Boris Johnson called for fresh sanctions against Venezuela, even while acknowledging the harm they could do to the Venezuelan people, saying: “In the end, as one politician in this area said, things have got to get worse before they get better – and we may have to tighten the economic screw on Venezuela.”

To those laughing off the notion: another major revelation on extent of Trump role in regime change in Venezuela. The coup would just be the beginning—imagine the fascist violence & repression necessary to impose this new rule on the mass Chavismo movement https://t.co/XfDr6A7V0T

The wide-ranging effects of US sanctions was seen in August this year, when it was revealed that American employees of the Venezuelan-funded media organisation Telesur English, including the journalists Abby Martin and Mike Prysner, have not been paid for some months due to restrictions imposed by the US Government, forcing them to temporarily shut down their show the Empire Files.

Commenting on a potential US-backed coup in the aftermath of the New York Times report, Prysner tweeted: “The coup would be just the beginning – imagine the fascist violence & repression necessary to impose this new rule on the mass Chavismo movement”.

In reaction to news of the secret meetings, the Venezuelan Government has announced it will hold a protest march against foreign intervention by the United States on Tuesday, 11 September.