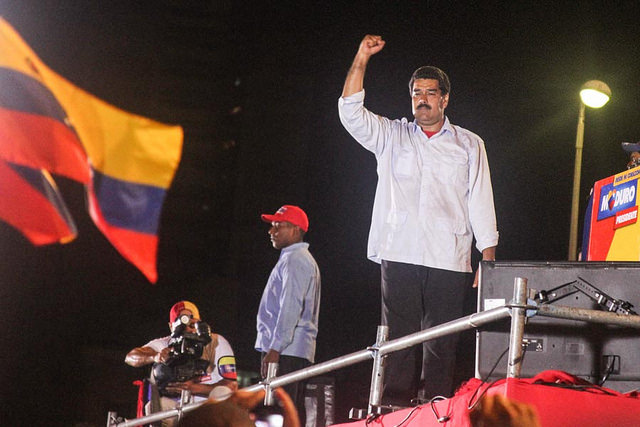 The deputy leader of the Scottish Tories described MSPs’ support for the Venezuelan government as “an embarrassment to Holyrood”.

THE STOP THE WAR COALITION has condemned recent Tory statements on the political situation in Venezuela while the British government continues to support Saudi Arabia’s involvement in the war in Yemen.

This follows remarks made by Scottish Conservative deputy leader Jackson Carlaw, calling on MSPs who had previously expressed sympathy or support for the governments of Hugo Chavez and Nicolas Maduro to “realise that, in the real world, this socialist experiment has been nothing short of devastating.”

Carlaw also stated: “This lefty love-in for the Venezuelan government has to stop. It’s an embarrassment for Holyrood. It’s all very well for left-wing politicians to offer misty-eyed praise for a regime they’d love to see in place across Scotland and the UK. But the fact is it’s a brutal dictatorship which has brought Venezuela to its knees.”

“This lefty love-in for the Venezuelan government has to stop.” Jackson Carlaw, deputy leader of the Scottish Conservatives

Responding to Carlaw’s comments, Green MSP Ross Greer said: “Regardless of what’s happening now in Venezuela, the socialist reforms led by Hugo Chavez were backed time and time again by the people and lifted millions out of poverty.”

SNP MSP Sandra White, in a motion made in March 2013 following the death of Hugo Chavez from cancer, noted that “the Parliament… believes that President Chávez made a positive transformation to the lives of ordinary Venezuelans by lifting them from poverty and social exclusion”, and “commends what it sees as his role in transforming Latin America into a progressive area and in affirming the sovereignty of its nation states”.

In a separate motion also made in the aftermath of President Chavez’s death, Labour MSP Neil Findlay expressed admiration for his government’s “social reforms aimed at addressing the legacy of inequality” and “governing in the interests of the Venezuelan people.”

“The British government actively supports regimes with infinitely worse records on human rights and democracy than that of the Maduro government, notably the Saudi autocracy which is currently conducting a murderous war in Yemen partly using British weapons.” Statement from Chris Nineham, on behalf of the Stop the War Coalition

In a statement made to CommonSpace, Stop the War Coalition founder member and National Officer Chris Nineham argued: “The Tories’ statements on Venezuela cannot be taken at face value.

“The British government actively supports regimes with infinitely worse records on human rights and democracy than that of the Maduro government, notably the Saudi autocracy which is currently conducting a murderous war in Yemen partly using British weapons.

“The suspicion must be that the furore around Venezuela has as much to do with the fact that Maduro and his predecessor Chavez have not bowed sufficiently to the dictates of Washington as any real concern for democracy.”

Since the war in Yemen began in March 2015, the UK government has approved export licences for arms and related materials worth over £3.3 billion to Saudi Arabia – leader of the US-supported military coalition currently intervening in Yemen, which has since been accused of war crimes – compared to the £371.5 million issued in combined US-UK aid to Yemen over the past two years.

According to a recent report from Save the Children, over a million malnourished children in Yemen are now at risk of cholera because of the conflict.

“Regardless of what’s happening now in Venezuela, the socialist reforms led by Hugo Chavez were backed time and time again by the people and lifted millions out of poverty.” Ross Greer, Green Party MSP

This latest controversy foreshadowed the recent launch of the New Foreign Policy group, which aims to examine geopolitical tumult from a Scottish perspective, and follows other recent right-wing attacks on British politicians alleged to be sympathetic with the Maduro government.

On 2 August, Work and Pensions Secretary David Gauke said: “It is high time Mr Corbyn publicly recognises this and apologises for giving succour to this appalling regime.”

Yesterday, Jeremy Corbyn condemned “the violence that’s been done by any side, by all sides, in all this.”

On 30 July Venezuelans voted in a constituent assembly, which will consist of elected delegates from all of Venezuela’s communities with the power to draft constitutional amendments. These amendments will then be voted on by the people of Venezuela.

President Maduro called the assembly as a peaceful resolution to the instability and unrest that has confronted his government since its inception, but has faced increasingly violent protests, including the assassination of several pro-Chavismo candidates prior to the election.

“I don’t listen to orders from the empire, not now or ever … Bring on more sanctions, Donald Trump.” Nicolas Maduro, President of Venezuela

Much of the Venezuelan opposition, which views the constituent assembly as an attempt by the Maduro government to cement its power, boycotted the vote in an effort to delegitimise the result.

Over 8 million – or roughly 41% of the electorate – reportedly turned out to vote. The opposition has greeted the result with accusations of voter fraud, while US President Donald Trump placed Venezuela under limited economic sanctions.

Maduro responded: “I don’t listen to orders from the empire, not now or ever… Bring on more sanctions, Donald Trump.”

On 5 August, a military base in the city of Valencia was attacked by what appeared to be a rogue faction of the Venezuelan armed forces, who were quickly suppressed by the Venezuelan authorities.

In a video released to social media, the armed group apparently involved denied that this was the beginning of a military coup, but instead a “civic and military action to re-establish constitutional order”. Their spokesman, identifying himself as Captain Juan Caguaripano, demanded the formation of a transitional government, and threatened that they would consider any unit that failed to join them a military target.

The Venezuelan government has since condemned these actions as a “terrorist attack.”