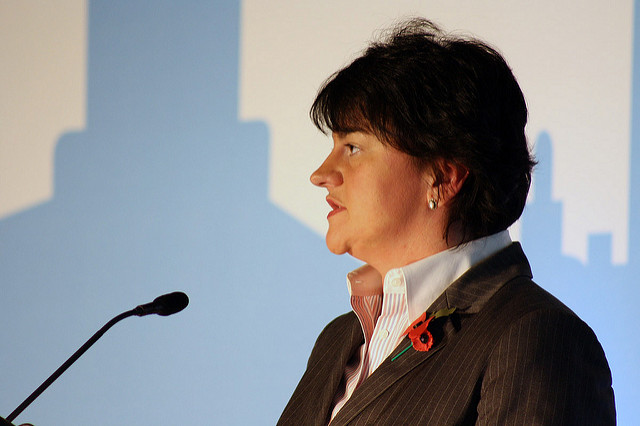 THE ASSEMBLY of Northern Ireland came to a standstill today (19 December) as members walked out on Northern Ireland (NI) First Minister Arlene Foster as she gave a statement on the controversial renewable heat incentive (RHI) scandal dubbed “cash for ash”.

Foster was due to face a vote of no confidence by the assembly due to claims that she had mismanaged the creation of an energy scheme which has allowed an extra £400m of tax funds to be paid out after “inadequate cost controls.”

MLA’s (elected assembly members) in the chamber walked out in protest, saying that any statement given by the first minister would be invalid as no independent investigation had, as yet, been carried out into the RHI allegations.

Foster, who leads the DUP in her statement said: “The recent reports in the media have been based on political spin. But I will give the facts.

“A crucial mistake that the tariff was higher than fuel. The tariff was set out in legislation and scrutinised by the department of energy, trade and industry (DETI) committee. But it was not picked up by officials, politicians and in early stages.”

Foster added: “A lack of cap for RHI is the biggest regret of my political career. But undoubtedly the aims of the scheme had the best intentions.”

However, the first minister in her speech went on to blame her former minister at the DETI Jonathon Bell, who she said failed to take any decisions that could stop the waste of public funds.

“The recent reports in the media have been based on political spin. But I will give the facts.” Arlene Foster

Many blame Foster for the scandal, who oversaw the RHI implementation as a minister in 2012, for not placing controls on fees paid out to incentivise businesses. The NI model contrasts with the rest the UK which has controls. As a consequence some service users were able to raise money by using more fuel than they needed.

The RHI came off the back of European Union (EU) legislation in the form of the Renewable Energy Directive, which set targets for the EU as a whole to provide 20 per cent of energy consumption from renewables by 2020.

All member states have to apply this to transport, electricity and heat generation in general, with the UK target being 15 per cent. If a member state fails to meet the target, it can be fined from the EU and so governments have used the RHI scheme to incentivise businesses to use more renewable heat.

The RHI has become a point of contention and controversy, as to many it represents the political corruption that exists in the connections between political parties, business and family ties in NI. It deals a massive blow to the prospects of renewable energy being encouraged by partnership between the government and businesses.

The loss of funds through the scheme and the surrounding controversy is made worse by the financial situation in NI, where expenditure £5,000 per head more than the taxation received.

An extra £400m of tax funds has been paid out after “inadequate cost controls”.

In response to the statement of by Foster, Sinn Féin’s Stormont leader Martin McGuinness said: “There is no credibility in an Investigation established solely by the DUP or in the selective release of some documents by DUP departments.

“An independent investigation is the only way to establish the truth of what has occurred and to begin to restore public faith in the institutions. That investigation needs to take place urgently. We need to establish all the facts and we need to know who benefited from this failed scheme.”

Bell, who was suspended from the DUP on Sunday (18 December) has been accused of involvement in widespread incidents of misuse of the scheme, including a farmer who was allegedly poised to pocket £1m over 20 years for heating an empty shed.

The former economy minister was also suspended for accusing his leader, Foster, and party advisers of gross misconduct over RHI. On a recent TV interview, he broke down asking God for forgiveness and receiving prayers live on TV.

“Removing the first minister from office pending a full public inquiry is the only mechanism which can restore public faith in these institutions.” SDLP

An Social Democratic and Labour Party (SDLP) Spokesperson told CommonSpace: “The actions of the speaker this morning run contrary to the principles of power sharing. These actions will be dealt with in due course. The arrogance displayed by Arlene Foster, ignoring the joint nature of the executive office, makes it more critical that she be removed from Office.

“All parties must urgently and publicly say that they will back the SDLP ministerial exclusion motion which will be heard this afternoon.

“Taxpayers are in line for a £400m bill over 20 years as a result of this mess. Removing the first minister from office pending a full public inquiry is the only mechanism which can restore public faith in these institutions.”