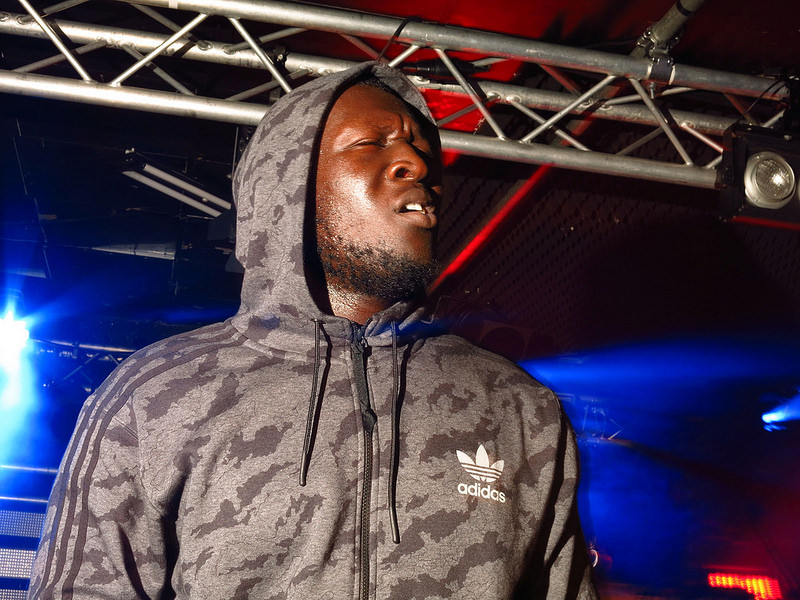 Closing the Brit awards, the grime artist delivered a furious freestyle attack on Theresa May

FRESH from scooping two of the nights biggest awards, grime artist Stormzy closed the Brit awards with a politically charged freestyle rap on Wednesday evening, attacking the Daily Mail and asking the prime minister, “where’s the money for Grenfell?”.

Closing the star-studded awards show, Stormzy freestyled: “Yo Theresa May, where’s the money for Grenfell?

“What, you thought we just forgot about Grenfell? You criminals and you’ve got the cheek to call us savages, you should do some jail time, you should pay some damages, you should burn your house down and see if you can manage this.”

Stormzy calling out the Tories and the Daily Mail at the Brits. He doesn't miss. pic.twitter.com/b75ikJTbMl

Stormzy, real name Michael Omari, who won two of the biggest awards at the prestigious 38th annual Brit awards, has been a vocal supporter of the Labour party under Jeremy Corbyn and was one of a number of artists who released a charity single in aid of the 71 victims of the Grenfell fire.

The fire broke out in June 2017 and tore through the Grenfell Tower block killing 71, injuring 70 and leaving hundreds with emotional and psychological trauma.

The UK Government has been consistently criticised for its handling of the aftermath of the Grenfell tragedy after it failed to find alternative, permanent accommodation for those made homeless and provide psychological support to survivors.

Later in his performance, Stormzy furiously attacked the Daily Mail, which he has previously called “anti-black” after the paper claimed grime artists were fuelling the use of “skunk” by treating cannabis as “product placement”, saying the newspaper could “suck his …” with no doubt over the missing word.

Stormzy’s rap was widely praised online, with one user saying he was “this country’s biggest asset, musically and politically”.

Elsewhere politics dominated the show with singer Dua Lipa joining others who carried a white rose in support of the #TimesUp movement set up to tackle sexual harassment.

Accepting her award for British female solo artist, Dua Lipa raised the issues of women’s rights and thanked “every single female that has been on this stage before me, that has given girls like me – not just girls in the music industry – but girls in society, a place to be inspired by, to look up and have allowed us to dream this big.”

She added: “Here’s to more women on these stages, more women winning awards and more women taking over the world.”

Emma Dent Coad, the Labour MP for Kensington, the constituency where the Grenfell tragedy occurred, tweeted shortly after Stormzy’s performance, saying: “Thank you for speaking truth to power, Stormzy.

“In Kensington we will never forget. We will never stop fighting for justice. No justice, no peace.”

Stormzy just sang “Theresa May, where’s the money for Grenfell? You think we forgot about Grenfell?” live on stage at the #BRITs.

He is this country’s biggest asset, musically and politically.

CommonSpace could not confirm if the prime minister had seen the performance.