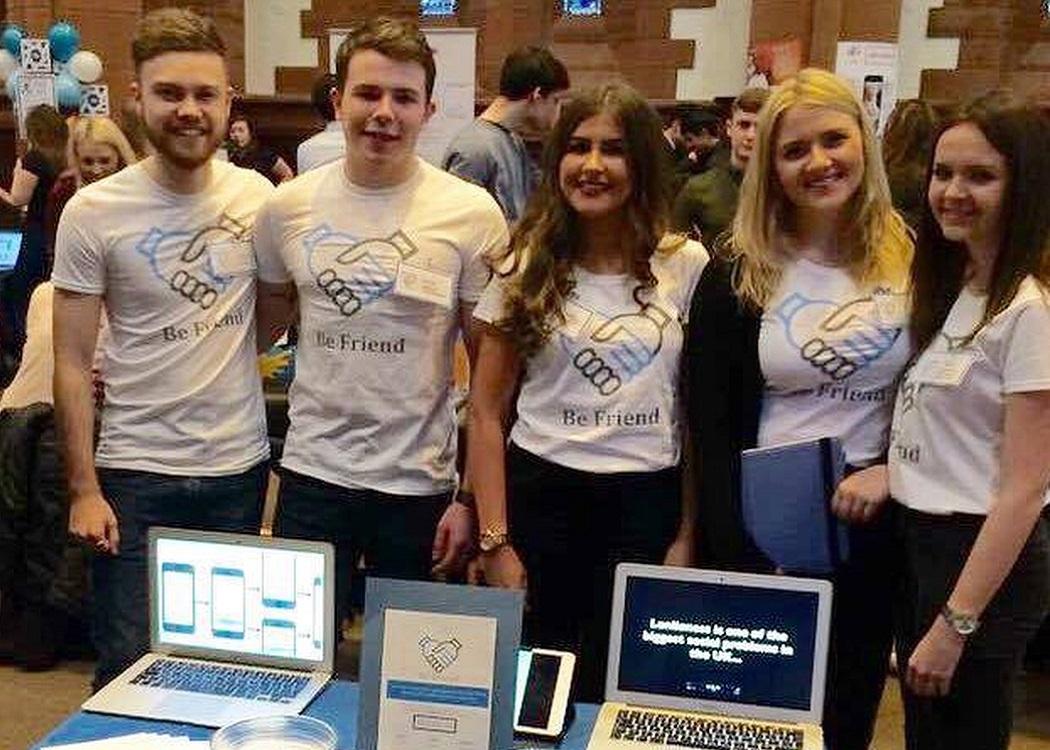 A team of Strathclyde University students will soon head to Texas to take part in a competition after bagging a university prize with the creation of an app aiming to combat loneliness in older people.

The second year entrepreneurship undergraduates were challenged to develop an app that could help to solve a prevalent social issue. They then pitched their idea – an app named ‘BeFriend’ – to academics from the Hunter Centre for Entrepreneurship at Strathclyde.

The internal competition within the university’s entrepreneurship department was set up to select one group from the university to go on to compete in Values and Ventures in the US, a competition held in Texas Christian University which challenges students to create a socially responsible venture that is also profitable.

Student Lisa Higgins, who focused on marketing for the app, told CommonSpace: “Even though we had confidence in our idea, we weren’t expecting to even get close to winning as there were so many other great apps.

“However we were then put on a shortlist of nine teams which made it feel more achievable, and then we were chosen.”

The five-strong team includes Caitlin Connolly and Jack Simpson, who storyboarded and created the look of the app; Ross Ford, who focused on growth potential and finances; and Amy Hyslop, who researched the data used in helping target potential users.

“They were the eventual winners because they identified a significant growing market and a real underserved problem.” Dominic Chalmers, lecturer, Hunter Centre for Entrepreneurship

BeFriend’s loneliness-fighting goal was a response to the social problem which affects over 51 per cent of over 75s , and it will use location services and profiling to show the user social activities and events created by organisations and other users in their area. It also offers the ability to send and receive messages and keep track of what is popular and also what friends are interested in.

The students realised that technology like this had never been attempted in response to the issue of loneliness and set about finding how prevalent technology use is within the older age group.

Higgins said: “We found that there’s actually a really substantial market for the app – many older people now own smartphones and tablets, so we spoke to groups of people within our target market and many of them were comfortable using these devices and were enthusiastic about our idea.

“And because the app is targeted towards older users, we would also be including features to make the app more accessible, for example, larger writing and buttons as well as technical help links on every page for those who are unsure. It’s a simple idea but it solves a very urgent problem.”

The app is still currently in development and the group is working in conjunction with Strathclyde University’s computer science students who will help bring a working prototype to life which can then be tested by users in the target market.

“We’re all very passionate about the idea and we think it could really make a difference to people’s lives, so we’re determined to work hard and make it happen.” Lisa Higgins, BeFriend team member

Dominic Chalmers, one of the Hunter Centre’s lecturers, said: “The BeFriend team came first out of 47 teams, so that should give an indication of just how hard they worked and they were the eventual winners because they identified a significant growing market and a real underserved problem.”

The team will now travel to Texas in April for a week-long all-expenses-paid trip funded by the Venture and Values competition where they could win from $250 up to $15,000 – and they are aiming for the grand prize.

Higgins said: “When in Texas we’ll be going on to another round against 25 other business schools from around the world, with the opportunity to win $25,000 of funding for our business proposal.

“Obviously we hope to win in Texas so we can continue working on the app and bring it to market, but if we don’t manage to win we will try to find funding from elsewhere to bring it to life.”

She added: “We’re all very passionate about the idea and we think it could really make a difference to people’s lives, so we’re determined to work hard and make it happen.”

A recent Ofcom report found that smartphone use among the older generation had more than doubled in only three years, contrary to perceptions of technology as a young person’s domain.