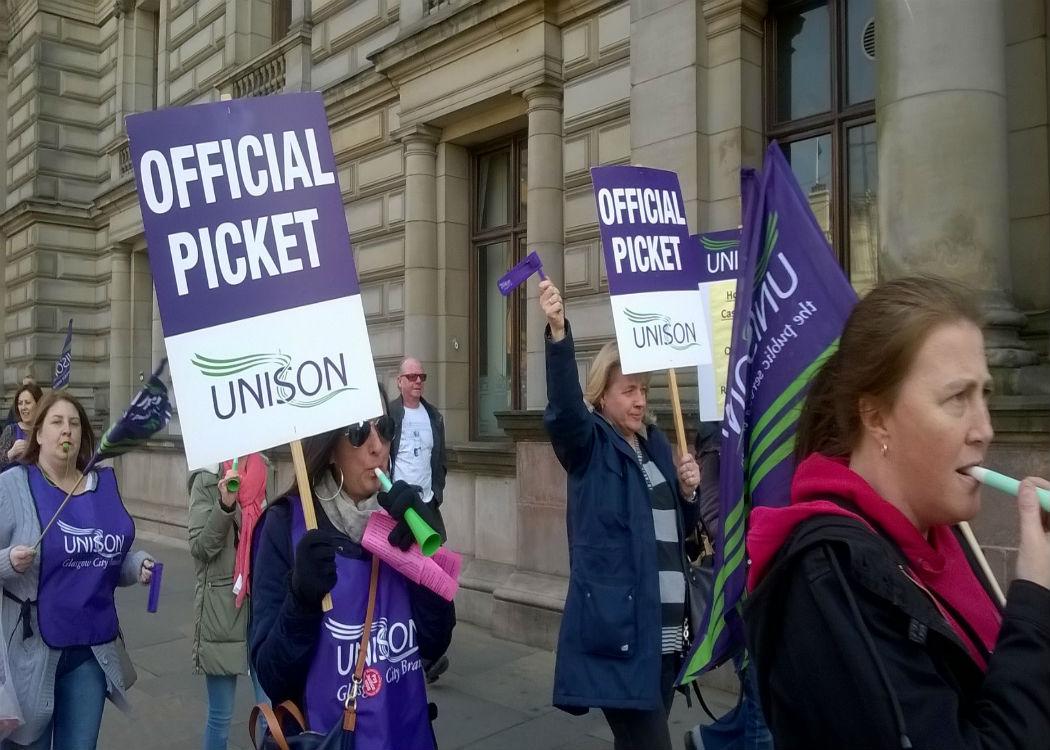 Seventy homelessness caseworkers who began all out strike for better pay on 31 March 2015 have won a substantial pay rise.

The caseworkers voted to accept an offer from their employer Glasgow City Council (GCC) at the recommendation of their union Unison. The offer included the central demand of the striking workers for the regrading of their jobs from grade five to grade six with the corresponding pay increase. A striking worker had claimed GCC representatives were initially “refusing to negotiate with us in the slightest” .

The agreement brings homelessness caseworkers into parity with other frontline social care staff. It means an increase of pay by PS1,000 per year, rising to PS5,000 per year by 2018. The upgrading will be partially paid for by voluntary redundancies in management.

Some concessions were made in the deal between Unison and GCC. An assessment will be necessary for all regraded staff and no back-pay has been awarded to the caseworkers for their time on Grade 5.

Brian Smith, Glasgow Unison branch secretary told CommonSpace: “The success of the strike, the longest in recent years, is down to the solidarity shown by the 70 workers who were taking action.

“This strike has caught a mood in the city and beyond, and hopefully it will give confidence to workers in Glasgow and throughout the country to stand up for their rights.”

One of the striking case workers, Stuart Graham, told CommonSpace that taking all-out strike was “daunting” but that they had felt supported by “the whole trade union community”.

He also claimed wider political implications for the victory of industrial action: “Although this is the end of our strike, people need to realise that this is just the beginning of the fightback. And we will be involved in taking the wider fight into the TU movement. Take confidence from us, from the porters in Dundee and the rising wave of organised resistance against the politics of austerity.”

A GCC spokesman told CommonSpace: “We are pleased our offer and the crucial service reform package that goes with it have been accepted – and that some staff will be returning to work in a new, enhanced community casework service that will support some of our most vulnerable citizens into settled accommodation.”