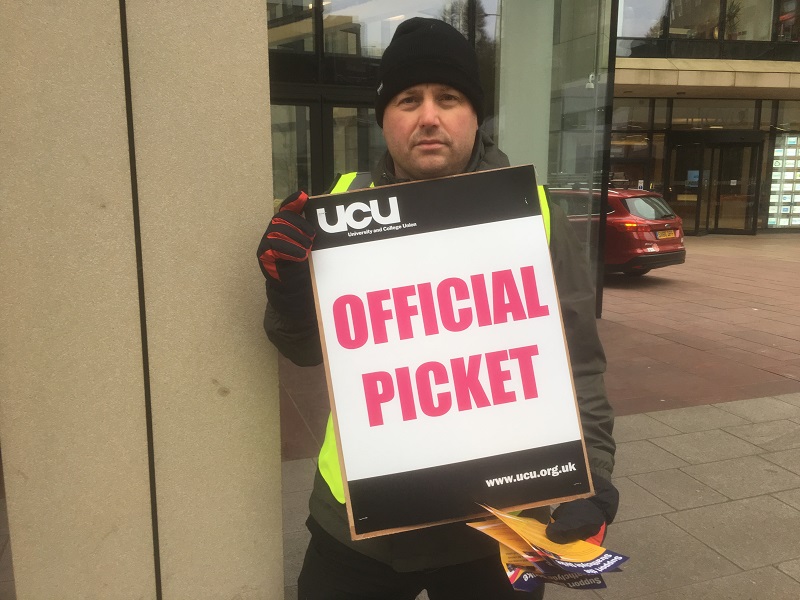 UNIVERSITY LECTURERS at 61 institutions across the UK began a series of strike actions yesterday over proposed changes to their pension which they say could leave them £10,000 worse off per month. Speaking to CommonSpace, one Strathclyde lecturer said this was part of the wider austerity agenda.

Staff are striking after a bitter dispute with the universities employer’s representative, Universities UK (UUK), which wants to change the way the current scheme operates from a defined benefit element, based on what a lecturer contributes, to one which is valued by the market. Unions say this will leave individual lecturing staff upto £10,000 worse off every year they are retired.

UUK says it needs to make these changes to meet a deficit of around £6.1bn pounds, but the UCU, who UUK have so far refused to negiotiate with, said yesterday the system used to calculate that figure is “recklessly prudent” and doesn’t reflect the real figure.

Members of the University and College Union (UCU) at Aberdeen, Dundee, Glasgow, St Andrews, Heriot-Watt and Strathclyde walked out of lessons yesterday until Wednesday next week. Lecturers at Stirling and Edinburgh will join their colleagues later in the strike.

On the picket line outside of the stunning new building that is Strathclyde University’s new Technology and Innovation Centre (TIC), which cost some £89mn, CommonSpace spoke with a physics lecturer, Dave McKee, who said this was not about a lack of money: “Universities have a lot of money and many assets, this building we’re stood in front of cost millions of pounds.”

McKee told CommonSpace that he thinks the dispute is down to the wider drive for austerity, which he says forces universities to deliver more with less money with no thought regard for the consequences for those who work in the system or the quality of the education delivered.

“It gives us a little bit of security for our retirement, and the proposals massively undermine that.” Physics lecturer Dave McKee

“We [university lecturers] don’t get paid a lot in this profession, not as much as we would in the private sector, and the pension is part of the financial aspect of why people come into this profession.

“It gives us a little bit of security for our retirement, and the proposals massively undermine that security but also our profession.”

Also on the picket line was Iain Paterson, a PhD student, who as well as studying lectures undergraduates on a zero hours contract. He hopes to progress into full time lecturing.

Paterson told CommonSpace that the length of time it takes someone to enter the profession does vary, but studying for upto 10 years is not uncommon:”With the level of education I have, what I am doing now is just about the lowest paid form of work I could do.”

CommonSpace asked Paterson whether he thought the changes could stop the profession from attracting the very best talent in the future:

“The job is a vocation, you do it for a love of teaching and of research but even if you accept lower pay to do the job you love you still need some security and the current pension arrangements provide that.

“With the current pay level, it is already hard to attract the very best, but if these changes go ahead as proposed by UUK it will be impossible.”

“The job is a vocation, you do it for a love of teaching and of research.” PhD student Iain Paterson

A senior professor at the university also on the picket lines agreed with Paterson, telling CommonSpace that she was striking in part to protect the academics who will follow in her steps and ensure the health of the profession.

Critics of the strike action have said that as members of a “caring profession”, like nurses or school teachers, it is unfair for univiersity lecturers to “abandon” their students and possibly impact on their education.

However Simran Kaur, an undergraduate at Strathclyde studying Italian and French, said it wasn’t lecturers to blame: “It is really dissapointing to see UUK aren’t prioritising the future of staff.

“Students think it is really important we show our solidarity. The conditions of our academic staff are also our learning conditions, so it affects students more than you might orginally think.

“Our lecturers work so hard and give so much to us, students here want to make sure they get the conditions they deserve.”

Iain Paterson said critics who say lecturers don’t care about their students are attempting to “weaponise” student wellbeing: “Student wellbeing is severely threatended by those teaching them to earn a living.

“Anyone with any regard to a ‘caring profession’ would show some care to the staff delivering that care.

“Sudents here want to make sure they get the conditions they deserve.” Strathclyde undergraduate Simran Kaur

“The only reason this strike is going ahead is because UUK has refused to talk.”

A professor also on the picket line at Strathclyde university agreed: “None of us want to be on strike, but this is about not just the protection of us as individuals but also the future of our profession.”

A source told CommonSpace that senior university staff had told them they had been urging UUK to negotiate, but had confirmed reports in the Guardian that it was votes on the UUK board by Oxford and Cambridge university which were preventing a solution. CommonSpace was not able to confirm this independently.

A UUK spokesperson said on Thursday 22 February: “Union leaders need to listen to the concerns of the Pensions Regulator and USS.  Pensions risk is very real.  Their dismissal of the funding challenges is hugely concerning, the very reason employers and the scheme must act responsibly to protect pensions and students.

“We remain at the negotiating table to engage with UCU on the long-term sustainability of the scheme and we continue to seek further talks.  If a credible, affordable solution were to be put forward by the union, employers would want to consider it.

“If they want to talk to us without preconditions, then let’s do it today.” UCU general secretary Sally Hunt

“This industrial action is targeted at students. It will be young people and the next generation of students who will also suffer if their education deteriorates because employers are forced to make cuts to pay more into pensions. Employers are committed to continuing to pay in 18% to staff pensions for the next five years, double the private sector average.”

UCU general secretary Sally Hunt said UUK should “stop spinning” and talk with unions: “Universities UK need to stop sending out mixed messages on whether it wants to talk or not. We hope the sensible voices at this morning’s strike summit will give their negotiators a clear mandate to go back to the table and get this mess sorted out.

“If they want to talk to us without preconditions, as the universities minister has suggested, then let’s do it today. The sector is suffering from a serious image problem at the moment and staff and students deserve much better from their leaders than spin and subterfuge.”