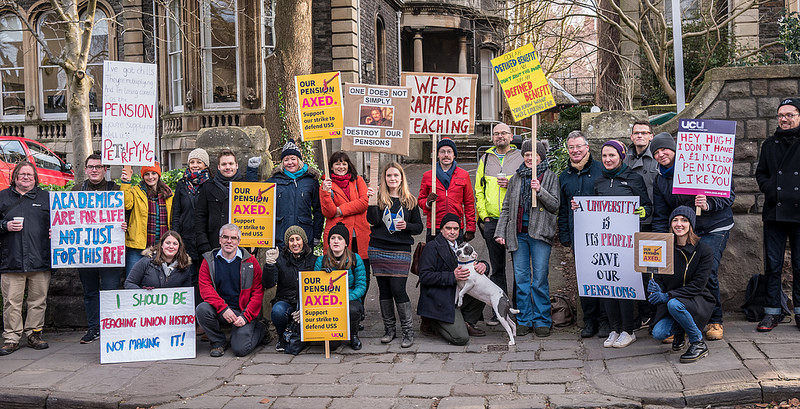 Strathclyde UCU chair: ‘No other profession in UK history has suffered a 50% cut in living standards in less than a decade’

TRADE UNIONISTS at Strathclyde University are leading national calls for members of the Universities and Colleges Union (UCU) to reject a “deliberately vague” pension offer from the university employers representative (UUK), after sustained strike action by the union.

The chair of the Strathclyde UCU branch, Brian Garvey, told CommonSpace of the “increased determination” amongst the university community not just to end the “brutal” pension cuts but reverse the “ongoing marketisation of education”.

Lecturing staff walked out of lessons throughout February and March after UUK said it would bring an end to the defined benefit pension scheme which lecturers at eight Scottish universities are members of, a move UCU said at the time could leave staff up to £10,000 a year worse off in retirement.

The latest deal from university bosses would protect the defined benefits element of the University Superannuation Scheme (USS), a key issue in the dispute, until April 2019.

It is also proposed that an independent panel is established to review the scheme’s viability.

A ballot of affected UCU members on the new deal opened 4 April. Explaining why his branch are calling for a rejection of the latest offer in the ballot, Garvey said:  “Our difficulty is the absence of more concrete assurance of what has been offered in place of the pensions cuts that have been rejected by our members. UUK has made a demand for us to end industrial action based on a very brief, deliberately vague offer that was sent out and that has not yet been negotiated by UCU.

“It is important to point out that strike action has succeeded in dramatically shifting the position of the employers, UUK. The UCU leadership is correct in pointing to the progress made in forcing UUK into negotiation in the first place and that this was a result of a level of activity of picket lines unseen in this sector.”

CommonSpace asked the Strathclyde University lecturer what compromises he thinks staff would accept in order to support a deal:  “At Strathclyde we have stated that there should be no changes to the pension, at the very least, until the results of the independent panel are known and agreed and until the employers have addressed the pension  reduction ‘holiday’ – whereby they reduced their payments into our pension scheme without our consultation.

“Staff have been making serious compromises in this sector annually.  Some media reports of over-entitled academics completely misrepresents the current situation in the higher education sector.  While University principals and USS pension scheme leaders may award themselves salaries of £300,000 to 600,000, ordinary staff have suffered a real-terms pay cut of 15–20 per cent since 2009 and have seen two huge reductions in our pensions while workloads have intensified.

“We are talking about a reduction in our living standards of at least a half, while new entrants to the sector face casualised, temporary and part-time work. As our colleague Lee Jones of Queen Mary University, London, has shown, this is unprecedented in the history of any profession in the UK.”

In their latest statement on 28 March after UCU announced it would consult with affected members, a spokesperson for UUK said the expert panel would allow time for trust to be rebuilt between staff and the employers representative.

UCU leader Sally Hunt said that it was right that members had their say on how negotiations should proceed: “These latest proposals were won by the solid action of UCU members,” she said.

“If members accept these proposals then the action for later this term will be suspended. If they reject them then there will be 14 more days of action before the summer and a fresh ballot to keep action running in the new academic year.”

Staff on strike grew more resolute as students at universities across the UK staged a series of actions in solidarity with their lecturers, with many organising a wave of occupations or ‘sit-ins’ demanding that university management negotiate, despite UUK and university leaders suggesting students had been “let down” by staff on strike.

Garvey said this support from students and the wider public strengthened their determination: “The current dispute has of course cost us our wages and it is not easy at all. There are bills not paid, rent in arrears. It brings immense pressure on ordinary workers.  But the actions have also energised us and got people talking about their dissatisfaction with the current path we are on.  We want a different one.

“The employers have been keen to stop our actions precisely at this moment when we are growing in numbers, the level of solidarity is rising, there is increased awareness of what is happening to our working lives, and when there is increased determination not just to end the pension cuts but reverse the ongoing marketisation of education.

“There is increased determination not just to end the pension cuts but reverse the ongoing marketisation of education.” Brian Garvey, Strathclyde University UCU branch chair

“University leaders should listen to the people who turn up every day, cut lunch breaks, work evenings and weekends to try to continue to provide quality education to students. The universities are very hierarchical places and quality of learning is being lost to meaningless students surveys, market-led evaluations that put unnecessary pressure on staff.

“People enter the profession because of a commitment to learning, student supports, science, education.  It is crushing to see people being demotivated, disillusioned, disempowered when they could be turning higher education round with their ideas, aspirations, humanity, and dedication.

“The pension dispute has been a spark that shines a light on much of this.”

CommonSpace understands that the result of the member-wide ballot on the new offer is expected around 12 April, which will determine whether 14 days of strike action planned to commence later in April will proceed.