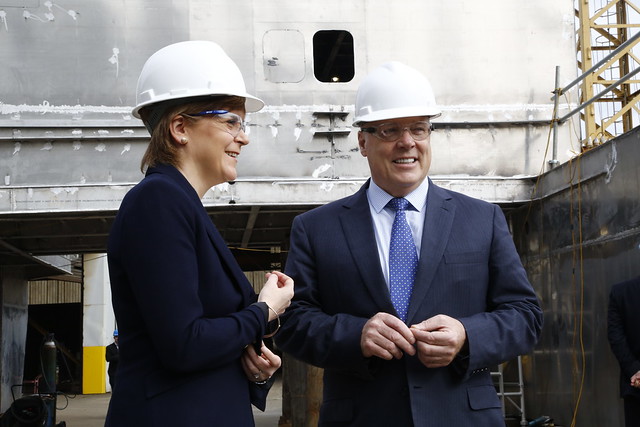 SCOTLAND’S leading trade union organisation and a left-of-centre Scottish think-tank have both endorsed Scottish Government plans to nationalise Ferguson Marine, but said that it would be a mistake if the government saw public ownership of the Clyde yard as simply a short-term fix.

Ferguson’s, currently owned by reputed billionaire Jim McColl, is set to enter administration on Friday with 350 jobs on the line, but Finance Minister Derek Mackay has written to McColl saying the Scottish Government is “ready and willing” to take the site into public ownership.

Ferguson Marine is contracted by public-owned ferry company Calmac to deliver two ferries being built at the Clyde yards, but those contracts were in danger of not being delivered unless “the government acts now”, Mackay said.

He wrote in the letter to McColl: “There remains a process to go through to secure the transfer of the yard to the Scottish Government, and we are hopeful that all parties recognise the importance of completing that transfer as quickly and as smoothly as possible.

“While we are open to engaging with any parties with a serious interest in investing in and securing a future for the shipyard, it is essential the government acts now to secure the completion of the ferries and continuity of employment at Ferguson’s.”

McColl has opposed nationalisation, writing in the Mail on Sunday yesterday [12 August] that it made “no economic sense” and would “damage the economy”. Ministers rejected the Clyde Blowers owner’s proposal to the Scottish Government for increased government support for Ferguson, which in return it would get an equity stake for. The proposal did not include a commitment to any new investment from Clyde Blowers.

Speaking to BBC Good Morning Scotland, Mackay said that a government cash injection into Ferguson’s would be “illegal” under EU state aid rules. The Scottish Government has first priority on taking over the yards because it is a creditor to the firm, providing two £45 million loans five years ago as part of an agreement which saw McColl take-over the company, which was in administration at the time.

Ferguson’s has said the Calmac contract’s costs are double those originally estimated, with the building of the ferries behind schedule.

Commenting, Dave Moxham, deputy general secretary of the Scottish Trades Union Congress (STUC), told CommonSpace: “First off, the STUC wants to see Ferguson’s brought into public ownership this week. That needs to be done to protect these vital jobs and contracts.

“Going forward, we want to see nationalisation go beyond delivering the one current contract, we want it linked up with an overall 10-15 year infrastructure strategy, which must include marine engineering.”

Referring to the St Rollox rail maintenance site in Glasgow known as ‘the Caley’, which shut its doors at the end of last month with unions criticising the Scottish Government for not taking the site into public ownership, Moxham added that across Scottish infrastructure a public ownership approach would be “hugely beneficial”.

“Whether it’s rail fabrication or ferry construction, public ownership can deliver in ways that, frankly, private ownership has shown itself unable to do, so it can be hugely beneficial to the Scottish economy. We know it can’t happen overnight, but ultimately we’d like to see an integrated strategy for public ownership of Scottish infrastructure.”

Robin McAlpine, director of the Common Weal think-tank, which in April published a report on an investment-led strategy for the Scottish economy, including a national infrastructure company, concurred with Moxham, stating that it would not be good enough for the Scottish Government to “bubble wrap Ferguson’s and put it back on the shelf” in a similar way to Prestwick Airport, which was bought by the Scottish Government for £1 in 2013 and was put up for sale again in June 2019.

McAlpine said: “In our detailed investment-led model there is a substantial place for collective ownership, but it only works if it’s part of a co-ordinated government economic strategy, not if it is simply emergency bail-outs.

“If the Scottish Government’s plan is simply to bubble-wrap Ferguson’s and put it back on the shelf for someone else to buy, then they probably would be better just giving Jim McColl the money. But there’s a much better nationalisation strategy available to them here.”

READ MORE: ‘This doesn’t need to be the case’: Calls for nationalisation as historic Glasgow rail depot closes

Also commenting, Craig Berry, engineer and author of Energy 2030, a Common Weal paper outlining a green energy strategy for the Scottish economy over the next decade, said that the nationalisation of Ferguson’s should also be looked at in the context of First Minister Nicola Sturgeon’s call for a “Scottish Green Deal” to tackle the climate emergency.

“To transition to a low carbon economy, the Scottish Government must have a plan to decarbonise our transport network,” Berry said. “Sturgeon’s call for a Scottish Green Deal must be met with the actions that can achieve this. The efficient use of our industry assets are paramount to success.

“With the Scottish National Investment Bank at its disposal, the Scottish Government can offer mission oriented investment which publicly finance the development of our industry assets, catalysing private investment and achieving our societal goals.

“By nationalising the Ferguson shipyard, we can help tilt economic development towards these goals. A significant number of our existing public fleet of ferries has the operational capacity to offer green alternatives using existing technology.”

Berry added that the combination of “nationalised industry assets”, such as Ferguson’s, the Caley and the Bifab manufacturing yards in Fife, which was partly saved by Scottish Government investment last year, could “drive a network of economic development orientated towards a renewable economy.”

Gary Smith of GMB Scotland, which represents workers at Ferguson’s, has also argued that the yard has “got a huge future” due to the engineering expertise of its employees.

“We know there are other commercial opportunities out there and we know that Ferguson’s is at the cutting edge of hydrogen technology and above all, the greatest asset at the yard that we’ve got is the workforce,” he said.

“It’s got a huge future, this company is not a basket case by any stretch of the imagination.”

Scottish Liberal Democrat Leader Willie Rennie said that there were questions for the Scottish Government to answer over its nationalisation plan.

“With government financially exposed with millions of pounds of public money involved in the maintenance of the Ferguson shipyard, it is only right that the government answers some difficult questions about their role,” he said.

Stuart McMillan, SNP MSP for Greenock and Inverclyde, including Port Glasgow where Ferguson’s is based, said he welcomed plans for nationalisation of the yard.

“I am pleased to hear that the Scottish Government has now indicated to all relevant parties that they are prepared to nationalise Ferguson’s to ensure the ferries are delivered, the jobs are saved, and that shipbuilding on the Clyde remains,” he said.