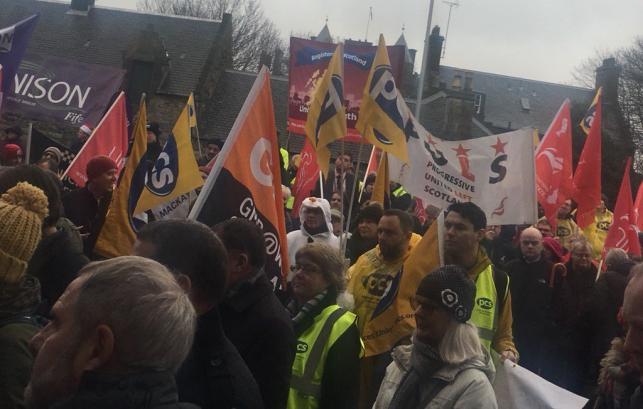 Parts of the Growth Commission report send “a worrying signal” to workers, the STUC general secretary has said

THE GROWTH COMMISSION REPORT published last week by the SNP has been criticised by the Scottish Trade Union Congress (STUC) for the lack of involvement by trade unions during its preparation.

While welcoming the report’s recognition of the need for government, businesses, civic society and trade unions to work together in pursuing inclusive growth, STUC general secretary Grahame Smith noted that this rhetoric “stands in stark contrast to the lack of trade union and civic society engagement with the growth commission itself in the preparation of this report”.

Of the 14 commissioners that made up the Growth Commission, which was chaired by corporate lobbyist and former SNP MSP Andrew Wilson, many were academics and figures from the business world, but there was no representation from Scotland’s trade unions or community organisations.

In an official statement on behalf of the STUC, Smith speculated that the absence of contributions from union perspectives could account for a number of issues in the report which “send a worrying signal to workers.”

Smith observed that the report contains little mention of diversifying economic ownership and no commitment to increasing collective bargaining coverage, and argued that, despite its stated desire to reduce poverty and inequality, such aims appear like “wishful thinking” without a discussion about the possibility of increased taxation, investment and redistribution.

“The commitment to match the UK’s corporation tax level is deeply worrying,” Smith continued, “particularly given the UK’s stated aim to slash tax and regulation in the wake of Brexit.”

However, Smith welcomed the report’s focus on population growth, as well as what he described as a “positive and sensible approach” to immigration policy, endorsing the Scottish Government’s promotion of the contribution of migrant workers. Nevertheless, the STUC believes the report could have gone further in considering how issues surrounding trade and investment can contribute to the achievement of fair work.

Commenting further, PCS national officer for Scotland and STUC President Lynn Henderson told CommonSpace: “The lack of trade union voice in the Growth Commission is disappointing for a few reasons. Firstly, trade unions are good for the economy, and can help economic growth. A recent report by ResPublica shows the positive impact high union density and real union policy engagement has on the economy.

“Secondly, the Scottish Government’s own workforce deliver the policies passed in Parliament. So, the government could include their own workers representatives at the planning stage too.

“And finally, this is about democracy. Working people in Scotland should have a say in their own future, and by engaging workers’ unions, the Scottish Government could do that.”

Radical Independence Campaign co-founder Jonathon Shafi also criticised the lack of trade union involvement, telling the Scotsman newspaper: “In 2014 the independence movement was galvanised around opposition to crushing Westminster austerity. That too was the theme of the successful SNP general election campaign. The Growth Commission, despite claims to the opposite, would open the door to various forms of austerity politics.”

Responding to Shafi’s comments, an SNP spokesperson told the Scotsman: “The Growth Commission report is explicitly anti-austerity, and offers an alternative the Tory hard Brexit – which would leave Scotland facing real downward pressure on public spending as the economy slows.

“We look forward to hearing views on the report’s recommendations – from community groups, businesses and trade unions, to the wider Yes movement and across civic Scotland.”

CommonSpace approached the STUC to ask if there had been any further engagement with the SNP since the release of the Growth Commission report, but had not received a response at the time of publication.

Picture courtesy of the STUC