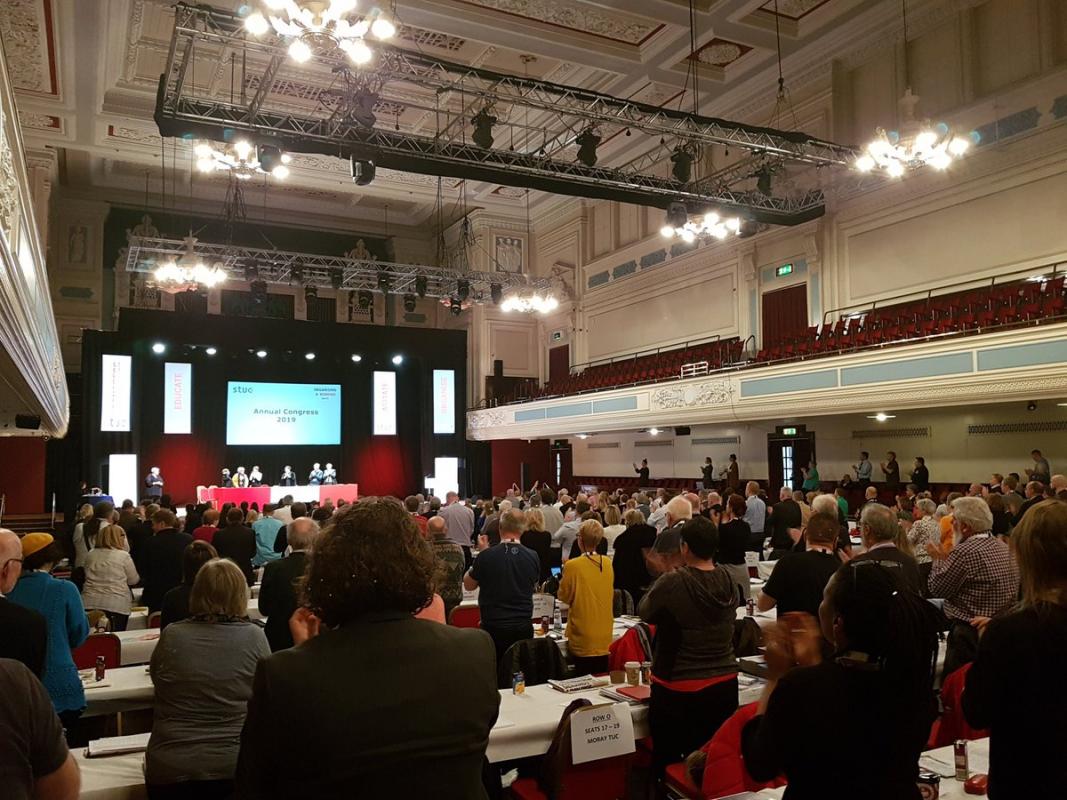 THE Scottish Trade Union Congress (STUC) has demanded “urgent action” from local authorities to tackle the shortage in accessible housing.

The call at the annual conference in Dundee comes after new figures showed Scotland lags behind other parts of the UK, both in terms of the construction of new accessible housing, and the provision of funds for the changing of existing housing stock to meet the requirements of residents.

Robert Mooney, STUC’s Disabled Workers Committee, said: “At STUC Congress today [16 April], we passed a motion calling for urgent action to improve access to accessible housing for disabled people. I am glad that we can support Inclusion Scotland’s work on accessible homes.

“It is a disgrace that, for many disabled people, their right to independent living is not being met and one major reason for this is a lack of affordable, accessible housing.  Some people have gone into hospital and are then stuck there because accessible accommodation can’t be found for them or their current home isn’t adjusted.

“This chronic shortage, exacerbated by years of austerity and budget cuts, has to end. The STUC is committed to working alongside other organisations to ensure that the homes of our future are fit for everyone.”

The right to independent living for disabled people is a human right under the UN Convention on the Rights of Persons with Disabilities, and disabled people’s organisations in Scotland have long demanded that this is at the heart of government policy.

The extent of Scotland’s problem with a lack of accessible housing was made clear in a report by the Equality and Human Rights Commission (EHRC) in 2018. It found that 55 per cent of local authorities believed a lack of funding was a barrier to providing adaptations to existing housing stock, required by 61,000 disabled Scots. By comparison this figure was just 23 per cent in England.

Just 17 per cent of Scottish councils set a target for accessible and adaptable housing compared to 31 per cent in England.

Only 24 per cent of Scottish councils said that the data they held about the housing requirements of disabled people could be deemed either ‘good’ or ‘very good’.

Welcoming the support from Scotland’s trade unionists, Susie Fitton, Policy Officer for Inclusion Scotland, said: “We are delighted to see this motion from the STUC. Disabled people have a right to adequate and accessible housing yet thousands are living in homes across Scotland where they cannot wash themselves, use the toilet, cook and prepare meals in a kitchen, or get in and out of the house without considerable support.”

Fitton noted that shortages were particularly acute for wheelchair users, and that the house building was not keeping up with demand.

She said: “However despite the now well-documented shortfall in the supply of accessible housing we are simply not building or adapting enough homes in Scotland for disabled people, particularly wheelchair users.

“Over 17,000 wheelchair users are living in unsuitable homes across Scotland and this unmet need is set to increase by 80 per cent by 2024. However between 2008 and 2016, 132,994 new homes were built in Scotland, yet only 1,427 were built to wheelchair accessible standards.

“This is simply unacceptable. Being unable to buy or rent an accessible home can literally imprison disabled people – in their own homes, in hospital, or in residential care against their will. This leads to poor heath, intolerable stress for families and the need for additional social care support. Disabled people living in inaccessible houses are also four times less likely to be in employment.

“Given that currently only 17 per cent of local authorities have targets in this regard we look forward to seeing every local authority in Scotland setting ambitious targets for wheelchair accessible housing, higher than 10 per cent where this is needed.

“But more needs to be done. We know that our design standards for social and private housing are out of date and do not always provide the space standards that disabled people need, our system of funding and providing adaptations is failing and disabled people who want to buy accessible home in Scotland can find this virtually impossible. We need a strategic approach to tackling these issues across tenure and we have no time to lose.”

The problem of housing accessibility in new builds hit the headlines in Scotland recently when Aberdeen council planning officers called on the city council to approve a development of 550 luxury homes by the Trump Organisation near the US Presidents Golf Course. The Aberdeen transport department has called for the application to be rejected due to its lack of accessibility, including its distance from public transport links.

Aberdeen residents have also complained that the luxury development does not address the need for affordable housing.

CommonSpace reported in February on Scottish Federation of Housing Associations criticism of a seven years Scottish Government freeze on housing adaptations. The SFHA said they were “deeply disappointed” that the 2019/20 Budget agreement maintained that freeze.

The Scottish Government admitted in February 2018 that many of the new generation of social homes being built will be too small for those who rely on wheelchairs or other mobility aids.