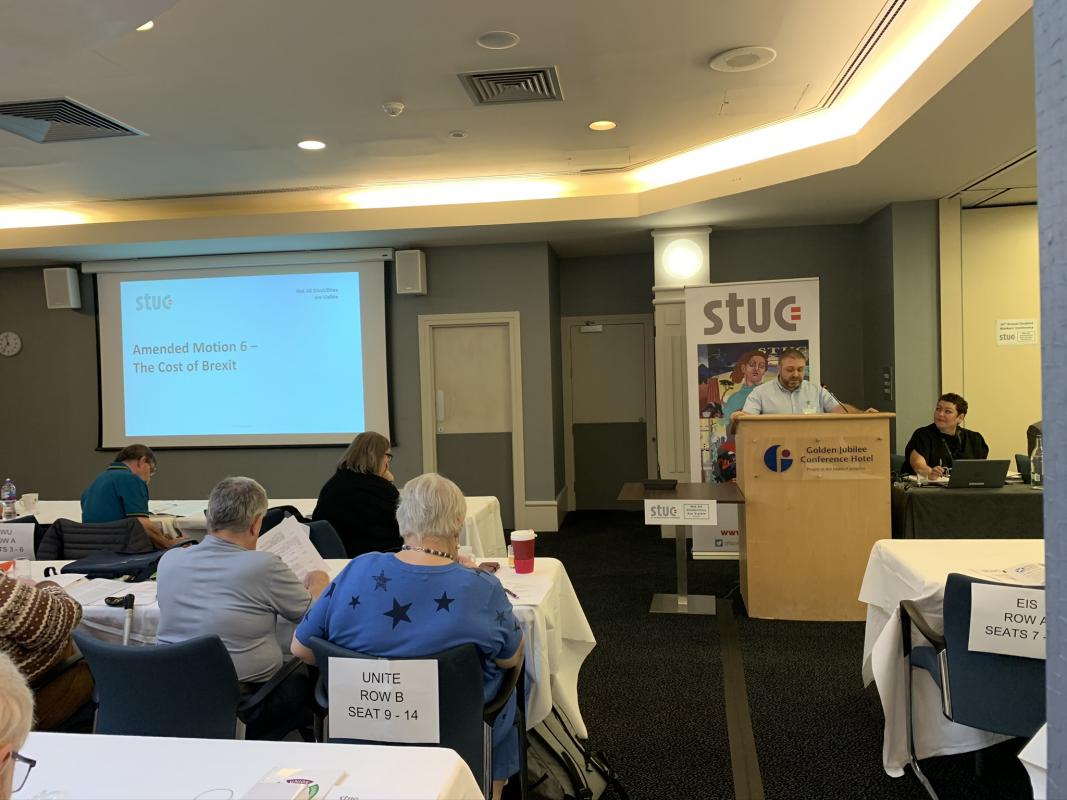 CONCERNS HAVE been raised by Scottish trade union members about the impact of leaving the EU will have on those people who are disabled.

On Saturday [16th November 2019], the STUC Disabled Workers’ conference heard calls for the Disabled Workers’ Committee to campaign against a no-deal Brexit, with delegates highlighting the impact on disabled people of leaving the EU with or without a deal.

Delegates voiced their worries that, once the UK leaves the EU, the UK Government would be under no obligation to maintain EU-mandated equalities legislation.

Delegates raised additional concerns over potential post-Brexit developments that could impact disabled people, including changes to regulations around medicines, preparations needed to travel to the EU with guidance and assistance dogs, and modifications to workplace rights.

Steven McGuirk of the Community Scotland union commented: “The [UK] Government is shamefully treating disabled people as collateral damage for the chaos that it has created.

“It is disgraceful that the Government continues to ignore the effect of crashing out of the EU to millions of disabled people in this country, many of them already face destitution as a result of brutal austerity measures.”

It was noted that during the conference that the EU has had a massive impact on the development of rights of disabled people across the UK. The conference also heard how the EU’s frameworks and legislation have strengthened disabled workers’ rights with regards to work, accessibility in public spaces, and against discrimination.

Delegates also expressed their view that disabled workers would suffer by leaving the EU with or without a deal, as both scenarios risk minimum standards for accessing products and services such as ATM’s and assistance during travelling being lost.

Unison’s Margaret Callender noted the commitments made by both the Scottish and UK Government to closing the disability employment gap.

Callender added: “As the TUC General Secretary Frances O’Grady describes, that Boris Johnson deal is even worse for working people than Theresa May’s and sells workers down the river.

“It is an indication of the likelihood that under a Conservative government, we are likely to witness the unpicking of current rights and to see no hope of securing any future improvement rights that the EU introduces.”

According to the Healthcare Distribution Association, there would be critical shortages of medicines following a no-deal Brexit.

Sheila Waddell of the EIS trade union said that, as someone who has had cancer four times and as a person with diabetes, she is very concerned about potential shortages of cancer medicine and insulin in the wake of Brexit.

Waddell said: “I’m not insulin dependent at this point of time, but I do know people who are, and I know that they are trying to stockpile it. I am already stockpiling my medication, as I do not trust the Tories for anything.”

On 17 November, an emergency motion was passed to allow the STUC Disabled Workers’ Committee to raise awareness of the potential impact on medical supplies being disrupted once the UK leaves the EU. The committee will work with affiliated unions to raise awareness of the potential consequence of Brexit and to request that Risk Assessment and/or Equality Impact Assessments are carried out in the workplace.

READ MORE: How is the Scottish Government preparing for No Deal?

Delegates also argued that leaving the EU could affect the progress being made towards meeting the UK’s responsibilities under Article 27 of the UN Treaty on the Rights of the Disabled People, and its commitment to the employment target set.

Following the conference, the STUC Disabled Workers’ Committee will campaign against a no-deal Brexit and highlight its potential impact on disabled people.

SNP Work and Pensions spokesperson Neil Gray MP commented: “We know that Brexit will be bad for Scotland – it poses a huge risk to people with disabilities, threatening the supply of medicines and a lack of clarity over travelling with assistance dogs.

“The UK Government refuses to stand up for Scotland’s overwhelming vote to Remain. With the SNP as the main challenger in every single Tory seat in Scotland, only a vote for the SNP is a vote to protect people with disabilities from the uncertainty of Brexit.”