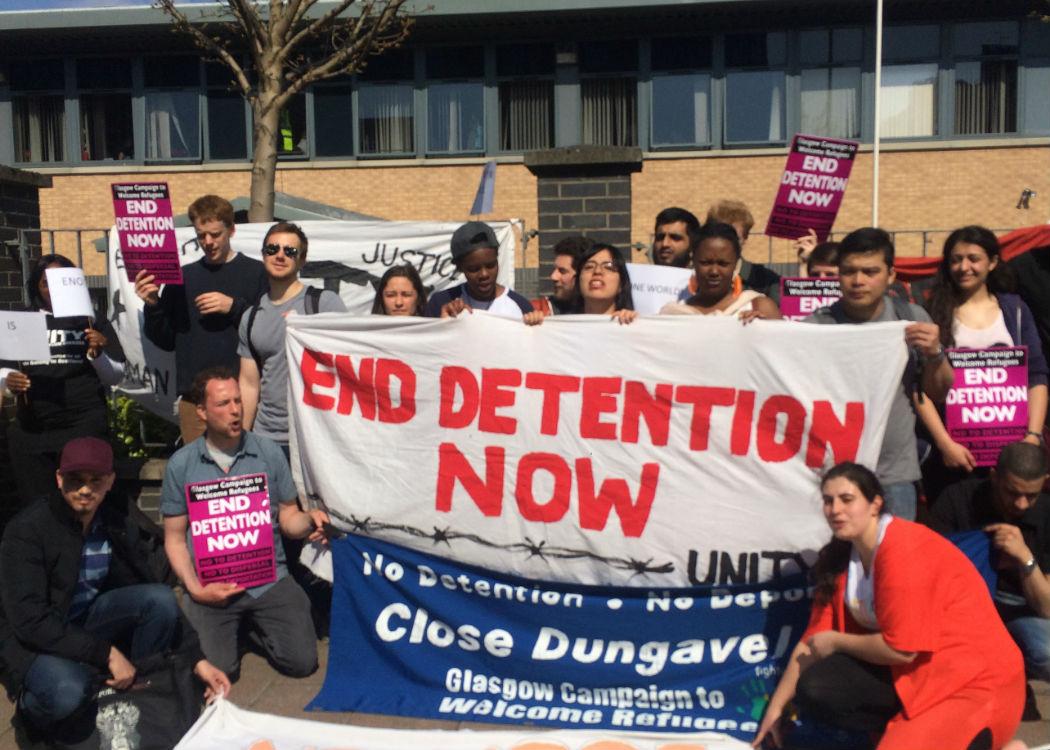 THE SCOTTISH TRADES UNION CONGRESS (STUC) has hit out at the Home Office after it refused to allow a delegation of political and religious leaders access to Dungavel detention centre following reports of a hunger-strike.

STUC deputy general secretary Dave Moxham said they can only assume the decision was “political” and raised questions about what the Home Office was trying to prevent them from hearing or seeing.

A demonstration has been called for Dungavel on the 30 May which has the support of trade unions and campaign groups.

The STUC, the Church of Scotland, the Catholic church, the Muslim Council of Britain and the Scottish Refugee Council wrote to the Home Office and the governor of Dungavel asking to meet with detainees. (Click here to read more).

However, despite the governor offering to facilitate the visit, the request was denied, with a spokesman for the Home Office saying: “We can confirm a request to visit Dungavel was received and subsequently declined.”

There are hundreds of migrants detained at Dungavel, many of whom have been there for months and some for over a year.

Speaking to CommonSpace, Moxham said: “We’re unhappy because the centre manager at Dungavel was perfectly happy to give us access, so we can only assume that the Home Office decision is political. We’re left to wonder what they’re trying to prevent us from observing or hearing

“We all know that individual detainees can be visited but we believe that unless we get a chance to talk to detainees collectively it will never be possible to establish the extent of the distress in Dungavel and reasons for it.

“We will be organising a demonstration on the 30th of May to make it clear that we’re not going to stop raising our voices on this issue.”

With the General Election looming, Moxham said that the STUC would be pushing all political parties to promote a more “humane” policy.

“We’ve got a clear policy that the detention centres should be closed down. We don’t think they have any place in a society that would wish to call itself humane,” he said.

“In the event that we’re looking at some sort of minority Labour government with SNP support we would hope that the issue will be a matter of important discussion.”

Meanwhile, the Church of Scotland said that the decision to refuse access was “deeply disappointing.”

Sally Foster-Fulton, convener of the Kirk’s Church and Society Council, told the BBC: “We, along with the STUC, want to listen to those held at Dungavel, hear their stories and offer whatever support we can.

“The mark of a good society is how we treat the most vulnerable within our borders. Making sure that compassion comes first is our only goal.”

The UK is the only country in the EU which detains migrants indefinitely. A recent report by a Westminster government committee recommended a 28-day limit to and for “community-based resolutions” to be favoured over detention.

On Monday, there were reports of detainees refusing food at Yarl’s Wood detention centre in England after the death of 33-year-old Indian Pinakin Patel (click here to read more).