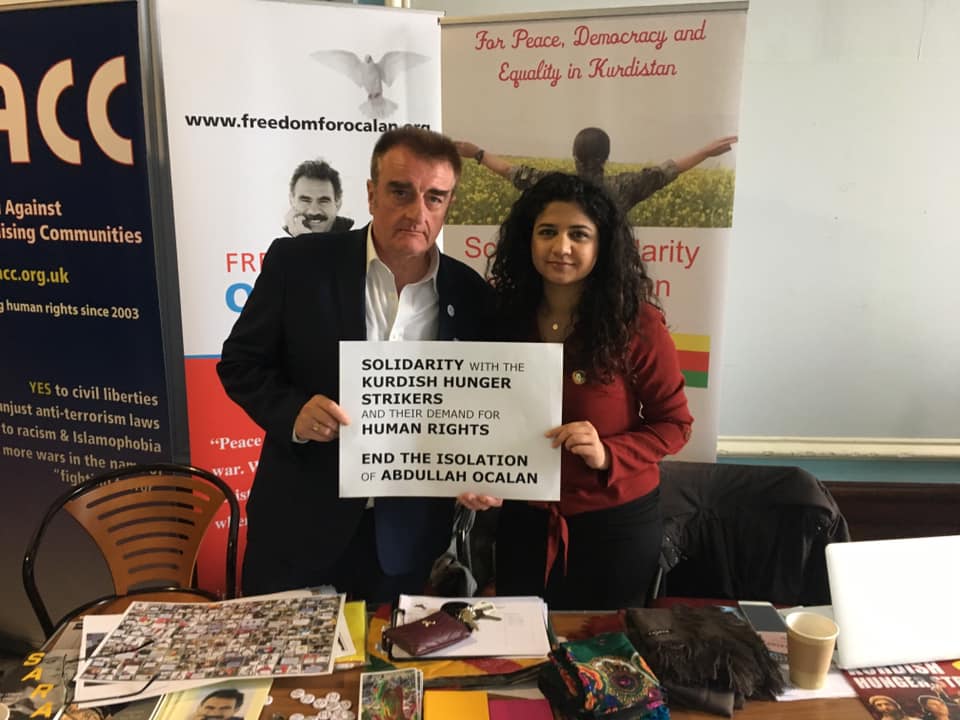 Sarah Glynn from the Scottish Solidarity with Kurdistan campaign group reports on the support for Kurdish hunger strikers in the Scottish Trade Union Congress.

An emergency motion, brought by Aberdeen Trades Council, whose secretary, Fiona Napier, has visited the Kurdish hunger strikers in Strasbourg, mandated the STUC General Council to show concrete support for the hunger strikers, and their demand that Kurdish leader, Abdullah Öcalan, be allowed his basic human right to visits by his family and his lawyer, by writing to the Council of Europe (of which Turkey is a member), the European Committee for the Prevention of Torture, and the UK foreign Minister, as well as informing trade unionists about the hunger strike and encouraging supportive actions.

A motion moved by Mike Arnott of Dundee Trades Council condemned the criminalisation of the Kurdish community by Police Scotland, as well as raids and harassment of Kurdish families in Edinburgh. Congress called on the Scottish Cabinet Secretary for Justice to ‘ensure that these actions cease forthwith and make a public commitment to the human rights and general wellbeing of our Kurdish community’. As the motion explained, ‘Expressions of Kurdish identity have been cited as evidence of support for the Kurdistan Workers’ Party (PKK) and thus, by simplistic UK security community logic, terrorism. By this reasoning, the whole Kurdish community is at risk of being criminalised.’

Read more: Why are 162 Kurdish political prisoners on hunger strike? 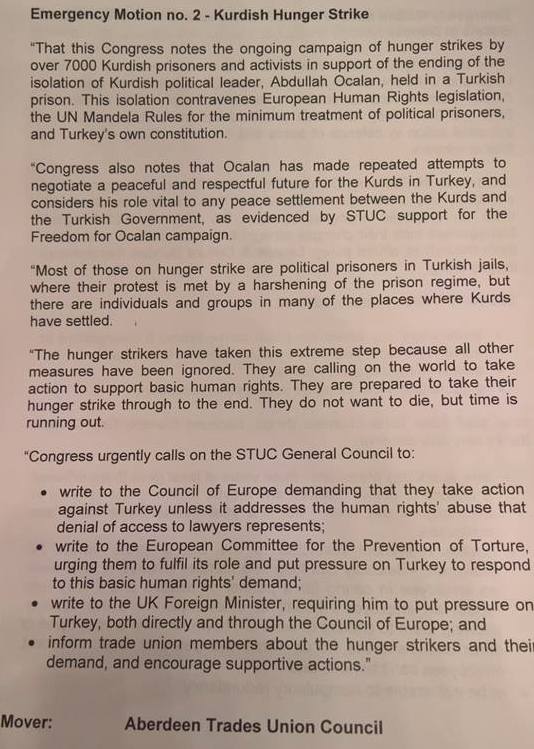 Both motions were seconded by Stephen Smellie, co-chair of Scottish Solidarity with Kurdistan, who reminded delegates that ‘This Congress in past years, has offered support to the Kurdish struggle in Turkey, we have supported the demand that the PKK be removed from the list of terrorist organisations and we have called for Abdullah Öcalan, leader of the PKK, a writer, and advocate for a democratic and peaceful solution to the Kurdish Question, to be released from his 20 years of solitary confinement in the prison on Imrali island in Turkey.’

Smellie described how the dawn raids on Kurdish families, which were prominently splashed across newspaper headlines and from which the police returned with a haul of scarves and flags, left the Kurdish community in Edinburgh to be faced with questions from neighbours, work colleagues and school friends. Schoolchildren were asked ‘is your Dad a terrorist? and, today, community members can be reluctant to take part in protests or for their kids to attend the language and music lessons at the community centre.

Scottish activists were also glad to make contact with the President of the Welsh TUC, Shavanah Taj, who has been part of the inspiring mobilisation in support of hunger striker Imam Sis in Newport.

Write a letter in support of the Kurdish hunger strikers

With Leyla Güven on her 162nd day without food, Nasır Yağız in Erbil on day 149, Imam Sis and the 14 hunger strikers in Strasbourg on day 123, Yusuf Iba in Toronto slipping in and out of consciousness, and over 7000 Kurdish political prisoners on hunger strikes in Turkish jails, I will end this report with a reminder from Smellie’s speech in support of the hunger strike motion. “No-one should be on hunger strike. It is not a campaigning tactic that anyone should consider, but it is a last desperate act to try to get the Turkish authorities to act. But they don’t care if hundreds of Kurdish activists in Turkey and across the world die. Therefore we need to build widespread international support for their demands”.

If you want to show your support, please write a letter to the CPT, tell your MP and MSPs of your concern, or organise a meeting. (Scottish Solidarity with Kurdistan would be glad to provide a speaker.)